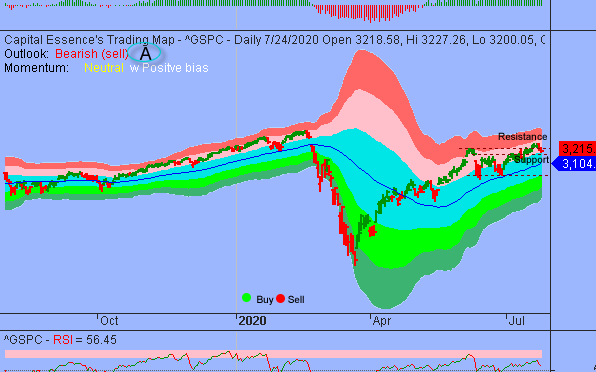 We’ve noted in the previous Market Outlook that: “an overbought pullback consolidation interrupted the multi-month rally in the S&P.  Although seemingly vulnerable to further short-term weakness, the overall technical backdrop remains positive so sell-off could be shallow because the sideline money will try to fight its way back into the market.”  As anticipated, S&P closed lower but off intraday low Friday, breaking its three-week winning streak as rising U.S. and China tensions and a stumble in tech and health care weighed on sentiment.  China ordered the closure of a U.S. consulate in Chengdu, hitting back against the United States’ move earlier this week to close a Chinese consulate in Houston.

A 16% drop in Intel (INTC) shares exacerbated the decline in tech after the chip maker’s better-than-expected results for the second quarter were overshadowed by delays in the roll out of its next-generation chips.  As such, the iShares PHLX Semiconductor ETF (SOXX) fell 1.57 percent on the day but is up more than 10 percent YTD, outperformed the S&P.  Now the question is what’s next?  Below is an update look at a trade in SOXX.

Our “U.S. Market Trading Map” painted SOXX bars in green (buy) – see area ‘A’ in the chart.  After dropping about 40 percent from its February high, near 270, and met the anticipated support at the 38.2% Fibonacci retracement of the 2008-2020 major upswing, SOXX had retraced all of the massive lost and some more, breaking out above the February high in early June.  Over the past few weeks, SOXX has been basing sideways using the 270 zone as support as it works off overbought conditions.  The fact that the ETF managed to hold on to most of the March-June massive gain is impressive, suggesting that SOXX will move up to test the 127.2% Fibonacci extension, near 340, as soon as it shakes off excessive optimism.

SOXX has support near 266.  Short-term traders could use that level as the logical level to measure risk against. 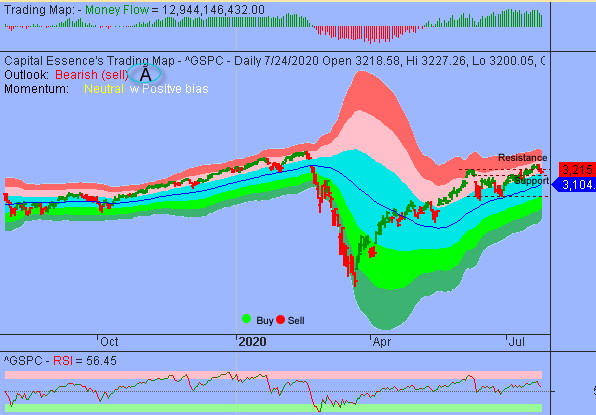 Looking at the one-year daily chart of the S&P, we can see that the range is getting narrower as the bench mark gauge tests resistance at late February bearish breakaway gap, near the important sentiment 3300 zone.  Technically speaking narrow range (or neutral) bar indicates uncertainty – traders refuse to press hard one way or the other just because they’re not very sure (or don’t know) about the near-term direction. And this explains why market often uses neutral bar to change direction. Although a single bar doesn’t form a trend so this is not a call for a top, rather it’s a warning signal, a sign in which the market is telling us that it’s ready for a pause. Right now the most important thing to look for is a test of support at 3200. A close below that level signals a medium-term correction with target of 3100-3050.

While seemingly vulnerable to short-term weakness, Money Flow measure holds firmly above the zero line, suggesting that this week selloff is merely a short-term correction which is taking place within a context of an intermediate term upswing.

In summary, with prices stretching out to the level that have not seen since the COVID-19 “great lockdown” started, temptation to take some money off the table is on a rise amid a growing sense that stocks might be running ahead of fundamentals. However, as last week’s trading action suggested, nobody wants to do too much too soon. So, while sitting on the overcrowded bullish bandwagon, we’ll begin to watch for the exit.