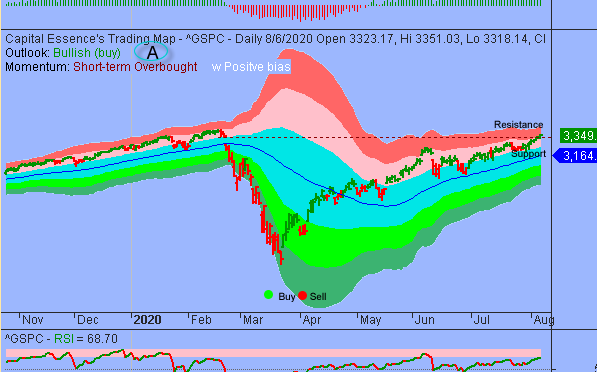 We’ve noted in the previous Market Outlook that: “S&P has confirmed a breakout above key resistance in a reflection of improved momentums.  Market internals remain supportive of further upside follow-through. Nonetheless, we expect near-term gains to be limited by overbought conditions. While some backing and filling would not be a surprise, the bulls will continue to have the benefit of the doubts as long as S&P holds above 3240.”  As anticipated, S&P traded slightly lower in early Thursday session before the late-day rally pushed the bench mark gauge to multi-month high, up 0.6 percent to 3,349.16.  The Dow Jones Industrial Average rose 0.7 percent to 27,386.98.  The Nasdaq Composite Index gained 1 percent to 11,108.07.  The CBOE Volatility Index (VIX), widely considered the best gauge of fear in the market, fell 1 percent to 22.65.

Airline and airline-related stocks o received a boost Thursday afternoon, after the State Department, in coordination with the Centers for Disease Control and Prevention, said it was lifting its global advisory against international travel for Americans that has been in place since March because of the COVID-19 pandemic.  As such, the U.S. Global Jets ETF (JETS) jumped 2.2 percent on the day but is down more than 47 percent YTD, underperformed the S&P.  Now the question is what’s next?  Below is an update look at a trade in JETS. 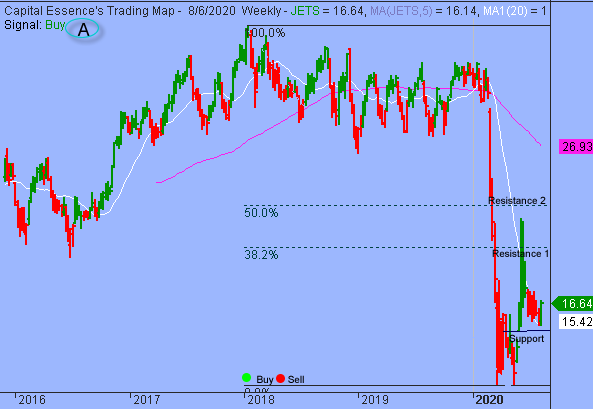 JETS has support just above 15.  Short-term traders could use that level as the logical level to measure risk against. 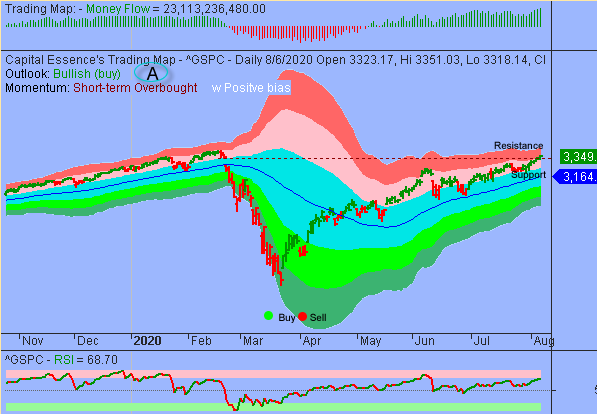 As expected, S&P continues drifting higher after breaking out above the important sentiment 3300 earlier this week.  This week’s rally pushed the index above the lower boundary of the red band.  As mentioned, the red zone indicated extreme overbought conditions.  The normal behavior for the S&P has been to consolidate and retreated almost every time it traded above that level so there is a high probability that a significant consolidation pattern will again develop in this area.

Nevertheless, momentum remains supportive over the short to medium term and Money Flow measure is above the zero line, indicating a positive net demand for stocks.  This certainly would argue that the path with least resistance remains to the upside.

Near-term, while some backing and filling would not be a surprise, the bulls will continue to have the benefit of the doubts as long as S&P holds above 3300.

In summary, overbought conditions have returned on a daily basis but momentum remains supportive so downside risk could be limited. It is possible that S&P could continue to drift higher as trading sentiment remains strong.  As for strategy, buying into short-term dips remains the most profitable strategy.