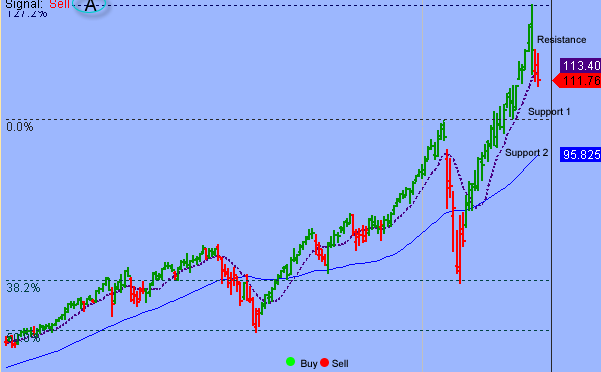 Big tech, which has led much of rebound from March, appears to be running out of steam as strong start to the week faded even as the Federal Reserve largely stuck to script and signaled near-zero rates to continue until at least 2023.  Microsoft (MSFT), Amazon.com (AMZN), Facebook (FB), Alphabet (GOOGL), and Apple (AAPL) ended below the flatline. The fall in Apple this week has seen the tech giant’s valuation fall below $2 trillion.  As such, the Technology Select Sector SPDR ETF (XLK) fell 1.72 percent on the day but up about 22 percent YTD, outperformed the S&P.  Now the question is what’s next?  Below is an update look at a trade in XLK. 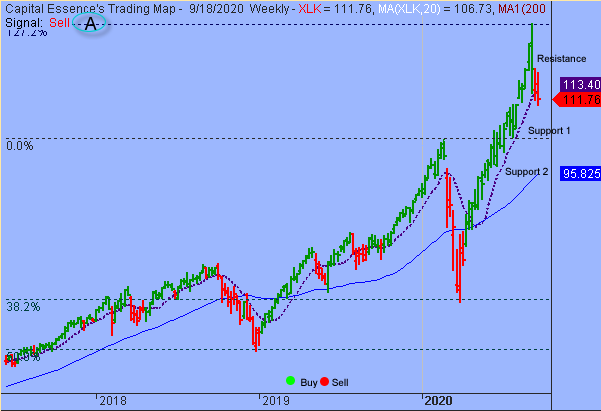 Our “U.S. Market Trading Map” painted XLK bars in red (sell) – see area ‘A’ in the chart.  Over the past few weeks, XLK has been trending lower in a short-term corrective mode after the spring rally found some resistance near the 127.2% Fibonacci extension.  This week’s downside follow-through confirmed last week’s bearish reversal signal.  This is a negative development, suggesting that XLK might have to move to a much lower level to attract new buyers and we’re looking at 103, or the July’s breakout point.

XLK has resistance near 117.  Short-term traders could use that level as the logical level to measure risk against. 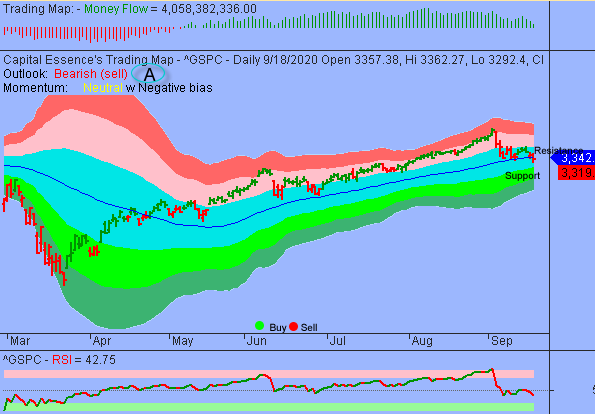 Key technical development in Friday session was a clear break below the trend channel moving average, the level that offered support since the S&P broke out in April.  This is a negative development, indicating more supply is coming into the market.  However it’s worth noticing that that all brief pullbacks throughout the summer had been met with aggressive wave of buying interest.  Additionally, Money Flow measure still hangs above the zero line, indicating a weak but positive net demand for stocks.  So, it will be important to monitor the retreat and rebound behaviors over the next few days to determine whether breakdowns are decisive.  We’d turn particularly bearish if S&P closes twice below the trend channel moving average, currently at 3343.

In summary, Friday’s bearish breakdown signify an imminent major trend shift.  While there seems to be room to go lower, it will be important to monitor the retreat and rebound behaviors over the next few days to determine whether breakdowns are decisive.  We’d turn particularly bearish if S&P closes twice below the trend channel moving average, currently at 3343.