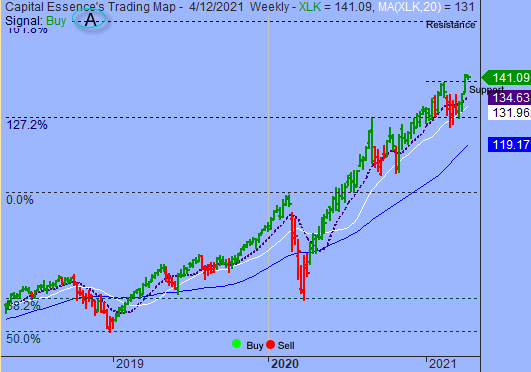 We’ve noted in the previous Market Outlook that: “S&P cleared key resistance, breaking out above the important sentiment 4100 mark.  Consecutive close above that level this week would confirm the bullish breakout signal, supporting upside follow-through in the days ahead.  However, market is short-term overbought following recent advance. There could be a sell-off in the offing but it would be shallow if so.”  As anticipated, S&P closed just below a record high Monday, dipped less than 1 point to 4,127.99, as investors awaited guidance from the start of quarterly earnings season this week.  The Dow Jones Industrial Average slipped 0.2 percent to 33,745.40.  The Nasdaq Composite fell 0.4 percent to 13,850.00.  The CBOE Volatility Index (VIX), widely considered the best gauge of fear in the market, rose more than 1 percent to 16.91.

Technology started the week on the backfoot stifled by weakness in chip stocks and mixed trading among the Fab 5.  Google-parent Alphabet (GOOGL), Apple (AAPL), Amazon.com (AMZN), and Facebook (FB) were in the red, while Microsoft (MSFT) was higher.  Microsoft said it will buy speech-recognition firm Nuance Communications (NUAN) for $19.7 billion in a bid to boost its foray into healthcare.  As such, the Technology Select Sector SPDR Fund (XLK) fell 0.48 percent on the day but is up nearly 9 percent YTD, slightly underperformed the S&P.  Now the question is what’s next?  Below is an update look at a trade in XLK. 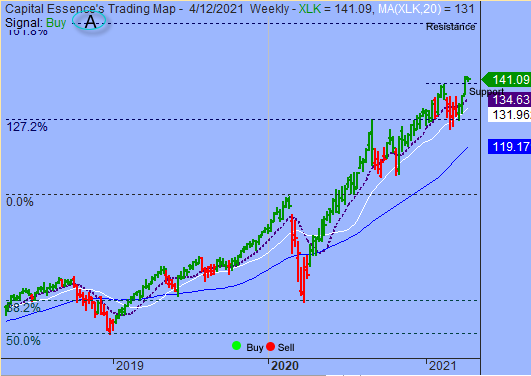 Our “U.S. Market Trading Map” painted XLK bars in green (buy) – see area ‘A’ in the chart. XLK moved down to test support at the 140 zone, or the prior high set in early 2021, after climbed above that level last week.  The overall technical backdrop remains positive, suggesting that the ETF will take a new leg higher as soon as it works off excessive optimism.  With that in mind, we’d look to buy into any short-term dips in anticipated, of a rapid advance toward the 160 zone, or the 161.8% Fibonacci extension.

XLK has support near 135.  Short-term traders could use that level as the logical level to measure risk against. 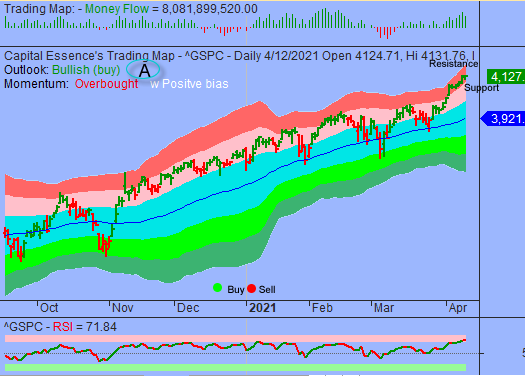 S&P continues basing sideways using the lower boundary of the red band as support. Momentum indicators reached extreme overbought zone, suggesting the market is a bit ahead of itself.  However, the fact that the S&P managed to hold on to most of recent gains despite overbought conditions is impressive.  This certainly would argue that the near-term risk remains to the upside.  With this in mind we’d look to increase upside exposure into short-term market dips.

In summary, S&P could continue to drift higher amid the positive earning influences.  So, it seems to us that the overbought conditions can be sustained for a few days, potentially allowing for a test of 4200 before a significant pullback unfolds.