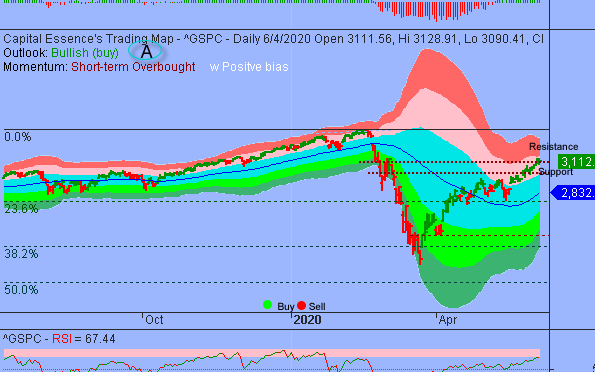 We’ve noted in the previous Market Outlook that: “the fact that market is overbought as S&P approached key price level that had been successful in repelling price action in the past suggested that upside gains could be limited.  As for strategy, traders should consider buying into market dips rather than chasing breakouts.”  As anticipated, stocks lost ground on Thursday as investors took profits in advance of Friday’s jobs report, ending a four-day rally driven by rising economic sentiment.  The S&P slid 0.3 percent to 3,112.35 while the Nasdaq Composite dropped 0.7 percent to 9,615.81. The Dow Jones Industrial Average closed just above the flatline, advancing 0.1 percent to 26,281.82.  The CBOE Volatility Index (VIX), widely considered the best gauge of fear in the market, rose less than 1 percent to 25.81.

Sentiment on the aviation sector improved after American Airlines (AAL) said it plans to fly 55 percent of its domestic schedule in July, up from May when the airline flew just 20 percent of its capacity from a year ago, sending its shares up 44 percent.  The hard-hit commercial airline industry also jumped on the news, with the ARCA Airline index gaining 10.1 percent.  As such, iShares Transportation Average ETF (IYT) rose 1.39 percent on the day but is down more than 13 percent YTD, underperformed the S&P.  Now the question is what’s next?  Below is an update look at a trade in IYT. 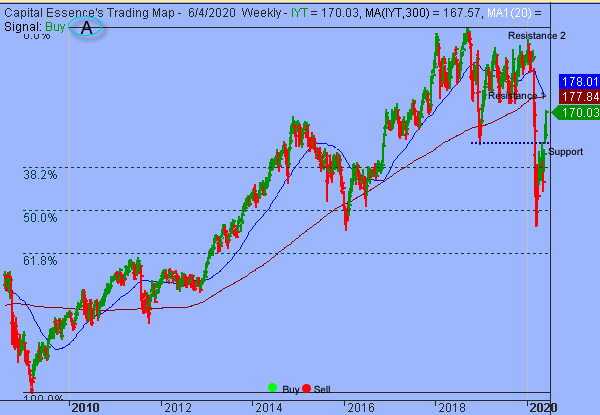 Our “U.S. Market Trading Map” painted IYT bars in green (buy) – see area ‘A’ in the chart. IYT has been on a tear in recent weeks after the late February massive selloff found some solid footing near the 50% Fibonacci retracement of the 2009-2018 major upswing.  This week’s upside follow-through confirmed last week’s bullish breakout above the early March breakdown point.  This is a positive development, opened up for a test of the closely watch 178 zone. That level is significant in charting terms.  A close above it in a weekly closing basis will bring the 2018-2020 highs, just above 200, into view.

IYT has support near 150.  Short-term traders could use that level as the logical level to measure risk against. 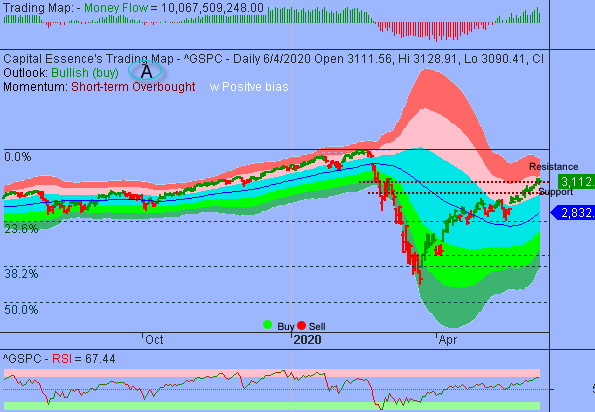 As expected, the S&P moved down to test support at the important sentiment 3100 zone after recent rally ran out of steam near the lower boundary of the red band, a key technical level.  Market internal has been weakened but downside momentum does not appear strong enough to generate a widespread breakdown.

While seemingly vulnerable to short-term weakness, support is strong near 3080 and the overall technical backdrop remains supportive over the short to medium-term.  This could help putting a short-term floor under the market.  A failure to hold above 3080 on a closing basis, meanwhile, will turn the short-term trend down and bring the 3000 zone back into view.

In summary, our near-term work on price pattern and momentum suggested strongly that the S&P is in a midst short-term pullback correction phase that could last about 2 to 5 trading sessions.  While seemingly vulnerable to short-term weakness, the bulls should not get into any serious trouble as long as the index holds above 3080. As for strategy, pullback will present a buying opportunity, while selling into strength may not be the best strategy in a market considered likely to bounce back.