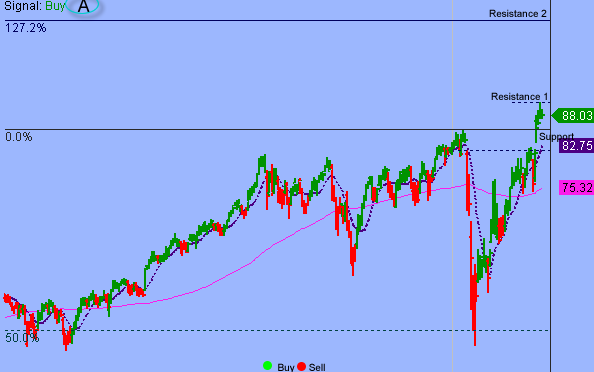 Stocks made a soft start to the week on reports that Chinese chipmaker SMIC and national offshore oil and gas producer CNOOC (CEO) could be ban from accessing US investors.  On top of rising U.S.-China tensions, profit-taking on value stocks on concerns about a surge in infections over the coming weeks following the Thanksgiving holiday also weighed on sentiment.  For the day, the Dow Jones Industrial Average dropped 0.9 percent to 29,638.64. The S&P slid 0.5 percent to 3,621.63, and the Nasdaq Composite closed lower by 0.1 percent to 12,198.74.  The CBOE Volatility Index (VIX), widely considered the best gauge of fear in the market, fell more than 1 percent to 20.57.

Industrials were also in the red as airlines fell sharply following a weaker outlook from JetBlue.  JetBlue Airways (JBLU) fell 3 percent after guiding fourth-quarter revenue to drop 70 percent year-over-year, compared with the prior guidance of a 65 percent decrease.  The company said booking trends remain volatile and expected revenue recovery will be nonlinear through the fourth quarter and beyond.  American Airlines Group (AAL) fell nearly 6 percent, Delta Air Lines (DAL) slipped 2 percent, while United Airlines (UAL) slipped 0.5 percent.  As such, the Industrial Select Sector SPDR Fund (XLI) fell about 0.9 percent on the day but is up more than 8 percent YTD, underperformed the S&P.  Now the question is what’s next?  Below is an update look at a trade in XLI. 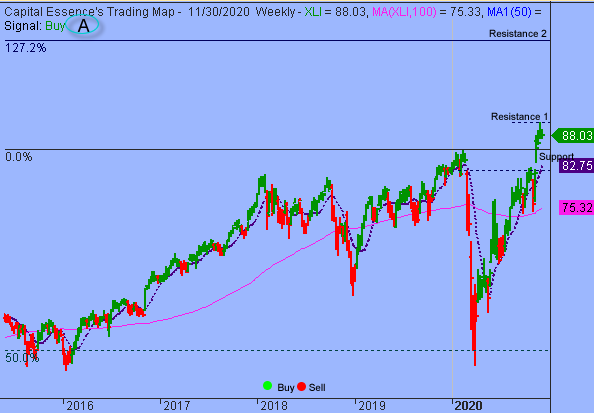 Our “U.S. Market Trading Map” painted XLI bars in green (buy) – see area ‘A’ in the chart. XLI has been on a tear in recent weeks after the late October correction found support near the 2-year moving average, a key technical level based on moving averages.   The early November pushed the ETF above the early 2020 high, signify a bullish breakout and upside reversal.  Right now the most important thing to watch is trading behavior as the 90 zone is tested as resistance.  A sustain advance above that level on a weekly closing basis will trigger acceleration toward the 105 zone, or the 127.2% Fibonacci extension.

The 2020 rising trend line, round 83, represents the logical level to measure risk against.  All bets are off should XLI close below that level. 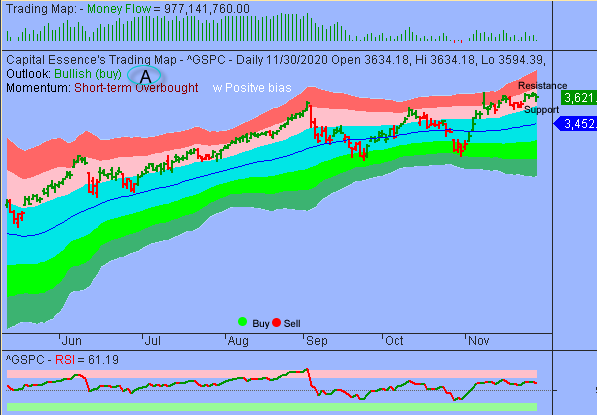 S&P moved down to tested support at the important sentiment 3600 mark after last week’s rally ran out of steam near the lower boundary of the red band.  Money Flow measure flashed a weak bearish signal as it’s on a verge of falling below the zero line, suggesting that the bears are more aggressive as prices off than the bulls were as prices ascended. Market is short-term overbought, following last week’s rally. This will give the bulls more pressure than they have already had.

For now, 3600 is the line in the sand.  A failure to hold above it indicated that long-term buying pressure has been exhausted and a much deeper pullback should be expected and we’re looking at 3450, based on the trend channel moving average.

On the upside, S&P has the lower boundary of the red band, currently at 3682, to trade against.  The normal behavior for the S&P has been to consolidate and retreated almost every time it traded above that level so there is a high probability that a significant consolidation pattern will again develop in this area.

In summary, market internals deteriorated as S&P’s testing support at the important sentiment 3600 mark.  Technically speaking, the more often support is tested the weaker it becomes.  A failure to hold above key price level means that long-term buying pressure has finally been exhausted.  We’d turn particular bearish if the S&P closes twice below that level.