We’ve noted in the previous Market Outlook that: “trading behavior in the S&P remains constrained by a short-term sideways pattern and shown little evidence of a sustainable change in trend.”  As anticipated, stocks closed lower on Wednesday, giving up earlier gains, as comments from Federal Reserve Chairman Jerome Powell following a monetary policy announcement sent bank stocks lower.  For the day, the S&P declined 0.3 percent to 2,905.97.  The Dow Jones Industrial Average fell 0.40 percent to 26,385.28. The Nasdaq Composite fell 0.2 percent to 7,990.37.  The CBOE Volatility Index (VIX), widely considered the best gauge of fear in the market, rose nearly 4 percent to close at 12.89.

One of the more noteworthy developments in recent days has been the move in gaming stocks.  The group was under selling pressure as the U.S.-China trade tensions flared up all over again after the Trump administration levying more tariffs on Chinese goods worth of $200 billion, US. casino companies have extensive exposure to China.    After surging more than 37 percent in 2017, the VanEck Vectors Gaming ETF (BJK) tumbled more than 13 percent YTD while the S&P rose nearly 9 percent over the same period.  Now the question is whether recent pullback is a pause that refreshes or it’s a beginning of something worse?  Below is an update look at a trade in BJK. 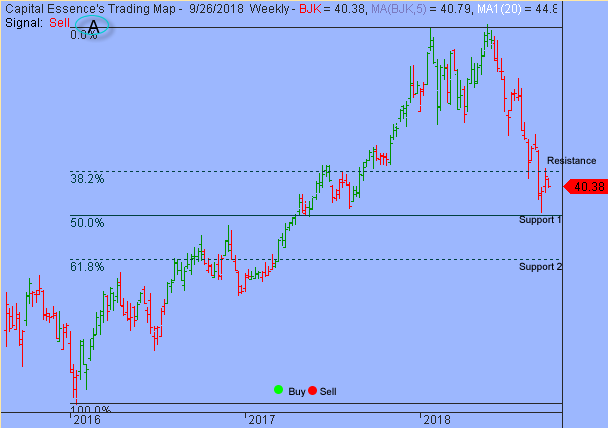 Our “U.S. Market Trading Map” painted BJK bars in red (sell) – see area ‘A’ in the chart.  The first dominant feature on the chart is the rising trend line starting in early 2016.  The second dominant feature of the chart is the downward trend since early 2018.  Over the past few weeks, BKJ has been trending higher in a short-term corrective mode after the late July selloff found support near the 50% Fibonacci retracement.  The September rally tested and failed at the 38.2% Fibonacci retracement.  This week’s downside follow-through confirmed the bearish reversal signal.  Over the next few weeks traders should monitor trading behavior as the September low, or the 50% Fibonacci retracement, just above 38, is retested.  A close below that level will resume the 2018 downtrend and a test of the 61.8% Fibonacci retracement, around 36, should be expected.

BKJK has resistance near 42.  Short-term traders could use that level as the logical level to measure risk against 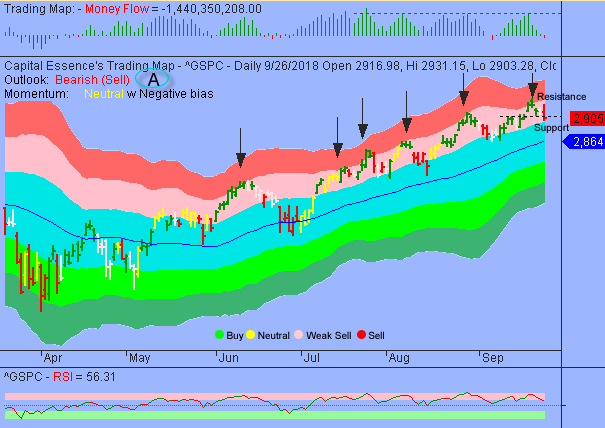 Key technical development in Wednesday session was a close below the mid-September bullish breakaway gap.  This is a negative development, suggesting that the three-day sideways trading pattern has resolved itself into a new downswing.  Money Flow measure fell below the zero line, indicating a negative net demand for stocks.   Over the next few days, traders should monitor trading behaviors as the lower boundary of the pink band, near the important sentiment 2900 mark, is tested as support.  A close below that level will trigger a new selloff with initial downside target near 2864.

Short-term trading range: 2900 to 3000.  S&P has a strong band of support between 2916 and 2900.  A close below 2900 will trigger a short-term sell signal with downside target near 2864, based on the trend channel moving average.  The index has resistance near 2940, or the lower boundary of the red band.  A close above that level could trigger acceleration toward the upper boundary of the red band, near 3000.  A close above that level often marked short-term market top so traders should put it on the trading radar.

In summary, S&P broke minor support on Wednesday.  When supports broke it means that buying pressure has finally been exhausted.  The stronger the support level, the more powerful the selloff.  Nevertheless, support is strong near the 2900 zone.  This could help minimize downside follow-through and widespread breakdowns.