We’ve noted in the previous Market Outlook that: “while global trade concerns continue negatively affect trading sentiment, the fact that the S&P pulled back to level that had been successful in repelling price action in the past increased the probability for a short-term bounce. 2900 is the line in the sand.  A close above it is required before there is any real prospect of a change in the medium-term upward pressure.”  As anticipated, the S&P closed higher Monday, up 0.4 percent to 2,924.43, as investors cheered news of Canada joining a trade deal with the United States and Mexico.  The Dow Jones Industrial Average rose 10.73 percent to 26,651.21. The Nasdaq Composite closed 0.1 percent lower at 8,037.30.  The CBOE Volatility Index (VIX), widely considered the best gauge of fear in the market, fell mora than 2 percent to close at 12.12.

Valuation concerns sent consumer-discretionary stocks lower Monday.  According to Morgan Stanley, the sector, which comprised of retailers, apparel companies and automakers, failed to appropriately price in the risks of an end of cycle slowdown that is being discounted in other sectors.  The Consumer Discretionary Select Sector SPDR ETF (XLY) fell 0.3 percent to 116.86 bringing its YTD gains down to just over 18 percent.  The S&P rose over 9 percent over the same period.  Now the question is whether recent pullback is a pause that refreshes or it’s a beginning of something worse?  Below is an update look at a trade in XLY. 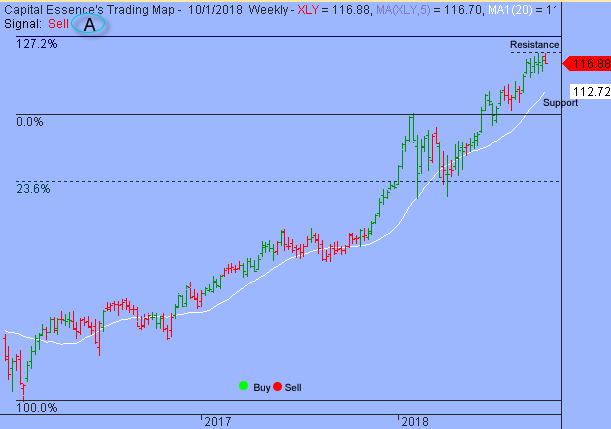 Our “U.S. Market Trading Map” painted XLY bars in red (sell) – see area ‘A’ in the chart.  Over the past few weeks, XLY has been basing sideway as the April rally ran out of steam just below the 127.2% Fibonacci extension of the 2016-2018 upswing, a key technical level.  A failure to climb above key price level means that long-term buying pressure has finally been exhausted.  This week’s bearish signify an important trend shifted.  A close below 114 on a weekly basis will confirm this and a test of the more important support between the 112-110 levels should be expected.

XLY has resistance just below 120.  Short-term traders could use that level as the logical level to measure risk against 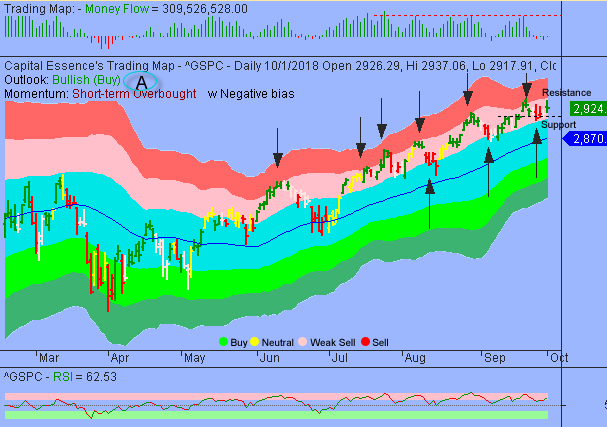 As expected, S&P rebounded nicely off support at the lower boundary of the pink band, a key technical level.  That level roughly corresponds with the late September breakout point.  Momentum has been strengthened but the indicator is much closer to overbought than oversold zone.  Money Flow measure flashed a bearish signal as it flattened near the zero line last week, indicating a weak net demand for stocks.  These elements will continue negatively affect trading sentiment in the coming days. So it should not be surprised to see further consolidation within the pink band, between 2900 and 2950.

Short-term trading range: 2870 to 3000.  S&P has support near 2900.  A close below that level will trigger a short-term sell signal with downside target near 2870, based on the trend channel moving average.  The index has resistance near 2950, or the lower boundary of the red band.  A close above that level could trigger acceleration toward the upper boundary of the red band, near 3000.  A close above that level often marked short-term market top so traders should put it on the trading radar.

In summary, S&P trades in broad trading bands that define the trend behavior. The upswing was very rapid with some short-term consolidation near each of the significant support or resistance levels. These support and resistance levels also define the limits and barriers to any future rally and uptrend development.