U.S. Dollar Index tumbles to its lowest level since early June as investors shifted their focus from a trade row between China and the United States to the Federal Reserve’s monetary tightening plans. After climbed to the highest level since summer 2017 in early August, the Invesco DB US Dollar Index Bullish Fund (UUP) rolled over, down 0.74 percent to 24.91, bringing its YTD gains down to 3.6 percent.  The S&P rose more than 9 percent over the same period.  Now the question is whether recent pullback is a pause that refreshes or it’s a beginning of something worse?  Below is an update look at a trade in UUP. 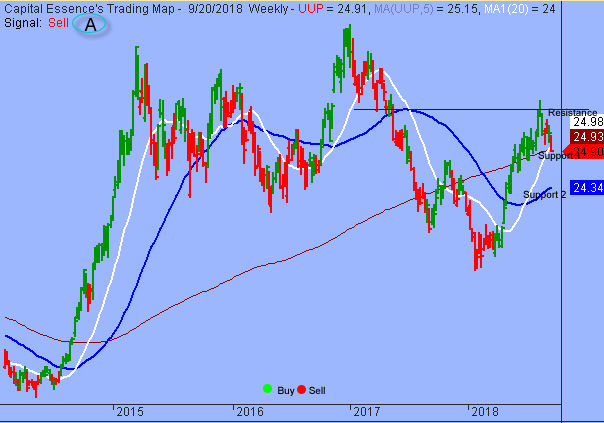 Our “U.S. Market Trading Map” painted UUP bars in red (sell) – see area ‘A’ in the chart.  Over the past few weeks, UUP has been trending lower in a short-term corrective mode after the early 2018 rally ran out of steam near 25.50.  That level was significant when UUP fell below it in early 2017.  It’s now acting as strong resistance.  This week selloff pushed the ETF below the multi-year moving averages, a key technical level.  This is a negative development, signify a bearish trend reversal.  We’d turn particular bearish if UUP closes twice below 24.80.  With that said, a close below 24.80 has measured move to around 24.40, based on the 1-year moving average.

UUP has resistance near 25.  Short-term traders could use that level as the logical level to measure risk against. 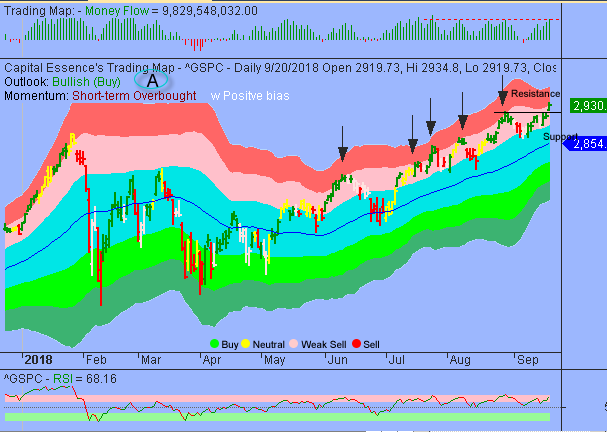 Key technical development in Thursday session was a clear break above 2916.  That level was significant when the S&P tested and failed in late August.  The bullish breakout would be confirmed on another close above 2916, which would support upside follow-through and a test of more important resistance in the 2970 area in the coming weeks.  Nevertheless, S&P is short-term overbought follow recent advance so it should not be surprising to see some kind of a pullback, the way we had in June, July and August, prior to the new upswing.

Short-term trading range: 2900 to 2970.  S&P has a strong band of support between 2916 and 2900.  A close below 2900 will trigger a short-term sell signal with downside target near 2850, based on the trend channel moving average.  The index has resistance between 2930 and 2970, or the red band.  A close above that level often marked short-term market top so traders should put it on the trading radar.

In summary, S&P cleared key resistances, breaking out to new high.  Consecutive close above 2916 would signify a breakout and bullish reversal, supporting upside follow-through in the weeks ahead.  However, market is short-term overbought following recent advance. There could be a sell-off in the offing but it would be shallow if so.