We’ve noted in the previous Market Outlook that: “daily chart of the S&P has shown signs that upside momentum is waning as the index shifted to overbought consolidation phase.  Although seemingly vulnerable to further short-term weakness, the overall technical backdrop remains positive so pullback should be shallowed and quick.”  As anticipated, S&P closed lower but off intraday low, declined 0.4 percent to 2,919.37, amid worries of more political turmoil out of the White House ahead of crucial midterm elections.  The Dow Jones Industrial Average fell 0.68 percent to 26,562.05. The Nasdaq Composite rose 0.1 percent to 7,993.25.  The CBOE Volatility Index (VIX), widely considered the best gauge of fear in the market, jumped over 4 percent to close at 12.20.

Energy stocks bucked the overall weakness, closed higher as Brent crude broke above $80 per barrel to hit its highest level since 2014 after OPEC leaders signaled they would not be boosting output immediately. The Energy Select Sector SPDR ETF (XLE) rose 1.5 percent to 76.20, up more than 2 percent MTD. Now the question is whether rally has more legs?  Below is an update look at a trade in XLE. 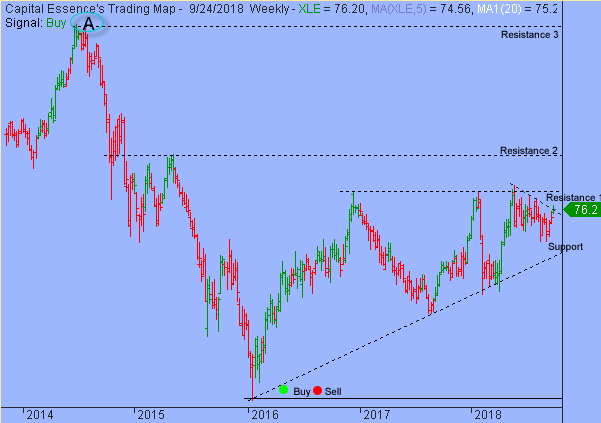 Our “U.S. Market Trading Map” painted XLE bars in green (buy) – see area ‘A’ in the chart.  The first dominant feature on the chart is the downward trend line starting in early 2014.  The second dominant feature of the chart is the massive triangle formation since early 2016.  This week’s bullish trading action pushed XLE above the late May falling trend line, signify a bullish reversal.  Over the next few weeks. Traders should monitor trading behavior as the 2017-2018 highs, around 79, is tested as resistance.  A close above that level suggests the 2016 triangle has resolved itself into a new upswing that’d retest the 20014 high, around 100.  Resistance stands in the way of continue rally is at the 2015 high, just below 84.

XLE has support near 70.  Short-term traders could use that level as the logical level to measure risk against. 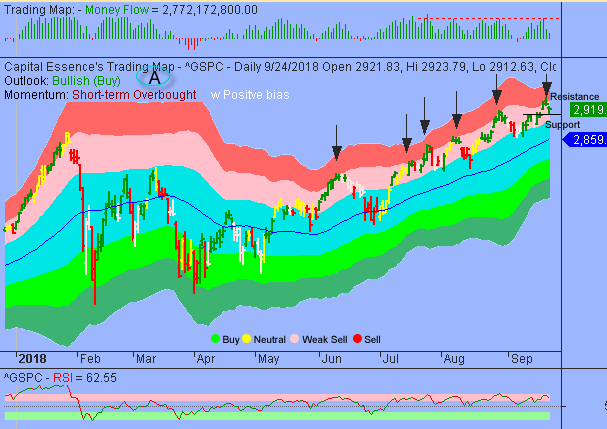 As expected, S&P moved down to test support last week’s bullish breakout point, just above the important sentiment 2900 mark, after recent rally attempt ran out of steam near the lower boundary of the red band.  That level was significant in charting terms.  Momentum indicator has been trended lower over the past few days but it’s much closer to overbought than oversold zone.  Nevertheless, Money Flow measure still holds above the zero line, indicating a positive net demand for stocks.  This could help putting a short-term floor under the market.  2900 is the line in the sand. A close below that level would see a massive pickup in volatility.

In summary, market internals deteriorated as S&P moved down to test support at the 2900 zone.  Nevertheless, this zone is too big and too important to fall quickly so it should not be surprising to see some backings and fillings in the coming days.  Perhaps the positive Money Flow measure is the best illustration for the bull’s case.