We’ve noted in the previous Market Outlook that: “market internals deteriorated as S&P moved down to test support at the 2900 zone.  Nevertheless, this zone is too big and too important to fall quickly so it should not be surprising to see some backings and fillings in the coming days.”  As anticipated, S&P closed slightly lower Tuesday, down 0.1 percent to close at 2,915.56, as trade fears have kept investors on edge.  The Dow Jones Industrial Average fell 0.26 percent to 26,492.21. The Nasdaq Composite, however, advanced 0.2 percent to 8,007.47 amid strength in large-cap tech stocks.  The CBOE Volatility Index (VIX), widely considered the best gauge of fear in the market, rose nearly 2 percent to close at 12.42.

Financial stocks caught a bid in early Tuesday session as the 10-year Treasury note yield climbed to 3.11 percent, near its highest level of the year.  The group however, gave back most of the early gains to close just above the flat line.  The SPDR S&P Bank ETF (KBE) added just 0.1 percent to 8.20, down 1.3 percent so far this week. Now the question is whether recent pullback is a pause that refreshes or it’s a beginning of something worse?  Below is an update look at a trade in KBE. 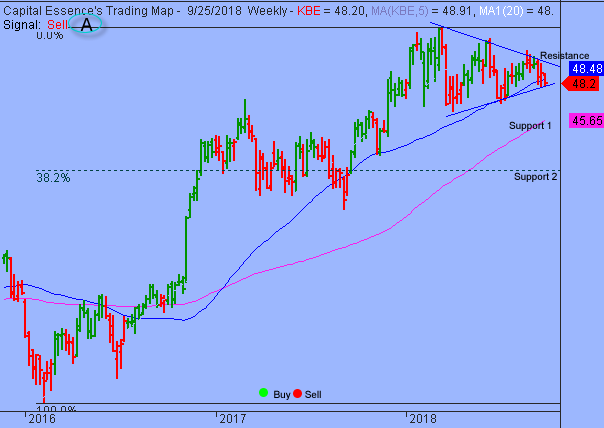 Our “U.S. Market Trading Map” painted KBE bars in red (sell) – see area ‘A’ in the chart.  The first dominant feature on the chart is the rising trend line starting in early 2016.  The second dominant feature of the chart is the triangle formation since early 2018.  Over the past few weeks, KBE has been trending lower in a short-term corrective mode after the July rebound ran into resistance at the 2018 falling trend line.  This week’s selloff pushed the ETF below the 1-year moving average, a key technical level.  This is a negative development, suggesting that KBE might have to move to a much lower level to attract new buyers.  Right now follow-through is the key.  A close below 48 on a weekly basis will trigger a new downswing with initial downside target near 46.  Below it, a more significant support lies at the 38.2% Fibonacci retracement, around 42.

KBE has resistance near 50.  Short-term traders could use that level as the logical level to measure risk against. 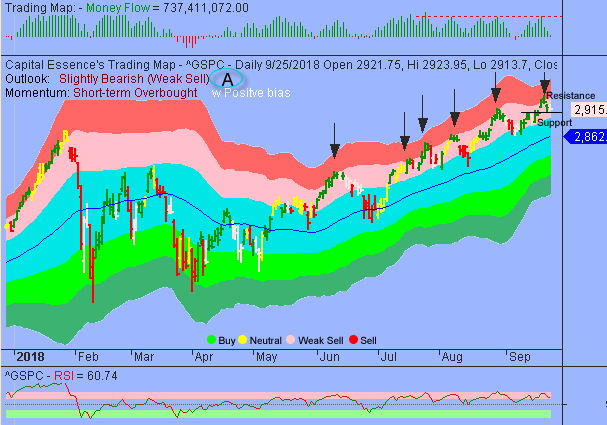 The S&P continues basing sideway near support last week’s bullish breakout point, just above the important sentiment 2900 mark.  Momentum indicator has been trended lower over the past few days but it’s much closer to overbought than oversold zone, suggesting further short-term weakness likely.  Money Flow measure also trended lower from above the zero line as prices descending. In fact, the indicator is on a verge of falling below the zero line, indicating a weak commitment to accumulate stocks. These elements will continue negatively affect trading sentiment in the coming days. For now, 2900 is the line in the sand.  A close below that level will trigger a new selloff with initial downside target near 2860.

In summary, trading behavior in the S&P remains constrained by a short-term sideways pattern and shown little evidence of a sustainable change in trend.  2900 is the line in the sand.  A failure to hold above that level would trigger a new sell signal and an unwelcome pickup in downside volatility.