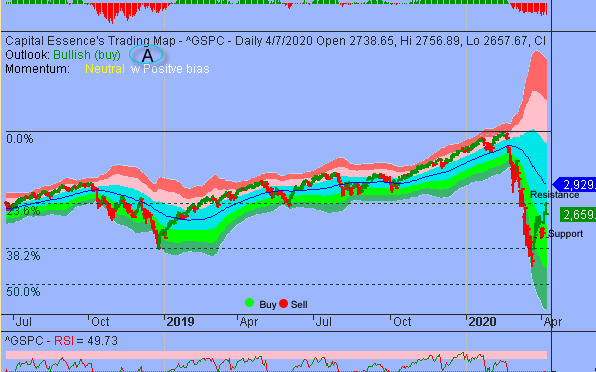 A wave of late selling hit stocks Tuesday as the energy-infused rally ran out of steam.  Oil prices fell sharply amid rising worries a coordinated production cut from global oil producers will do little to stop an expected glut in supply.  For the day, the Dow Jones Industrial Average fell 0.1 percent to 22,653.86.  The S&P gave up 0.2 percent to 2,659.41.  The Nasdaq Composite fell 0.3 percent to 7,887.26.  The CBOE Volatility Index (VIX), widely considered the best gauge of fear in the market, rose more than 3 percent to 46.70.

Financials, mostly banks, ended the day higher, underpinned by a jump in Treasury yields.  The yield on the benchmark 10-year Treasury note, which moves inversely to price, rose 5 basis points to 0.72 percent.  JPMorgan Chase (JPM) closed about 2 percent higher, while Goldman Sachs (GS) gained 5 percent and Bank of America (BAC) rose 4 percent.  As such, SPDR S&P Bank ETF (KBE) jumped 3.72 percent on the day but is down more than 42 percent YTD, underperformed the S&P.  Now the question is whether the rally has more legs?  Below is an update look at a trade in KBE. 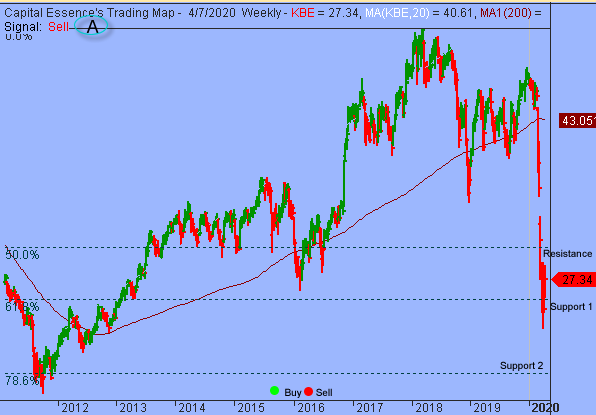 Our “U.S. Market Trading Map” painted KBE bars in red (sell) – see area ‘A’ in the chart.  Like the rest of the market, KBE is in free mode after the late February selloff pushed the ETF below the 4-year moving average, a key technical level based on moving averages.  Over the past few weeks, KBE has been basing sideways near the 61.8% Fibonacci retracement of the 2009-2018 major upswing as it works off oversold conditions.  The fact that the ETF is trading sideways rather than moving significantly higher following the steep selloff indicating an internal weakness.  This suggests that KBE will have to move to a much lower level to attract new buyers.  KBE has minor support near 24.  A close below that level on a weekly basis has measured move to around 18.

KBE has resistance30.50 near 77.  Short-term traders could use that level as the logical level to measure risk against. 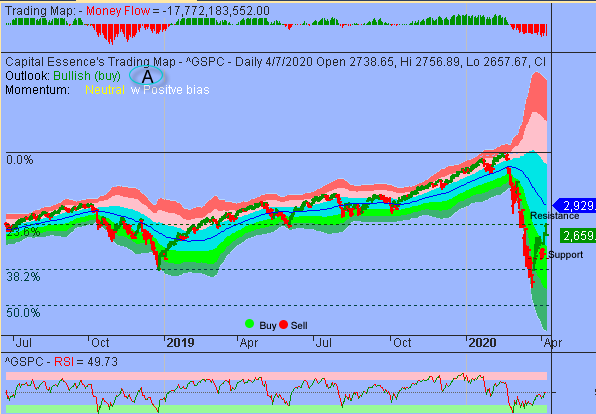 As expected, S&P moved up to test resistance at the 23.6% Fibonacci retracement, near 2750, after breaking out above the closely watch 2650 mark.  That level was significant when the index fell below it in March.  Technically speaking, the S&P is now at a key juncture.  It is testing formidable resistance from below.  In accordance to the Japanese candlestick pattern recognition, Tuesday’s bearish topping tail, or shooting star candlestick, is a clear indication of supply overwhelming demand.  Perhaps a lagging Money Flow measure is the best illustration of the bears’ case.  The indicator is at the lowest level going back to late 2018. Technically speaking, this trading pattern exhibits characteristics of a distribution phase, the period in which smart money sell (distribute) their positions.

While seemingly vulnerable to further short-term weakness, the bulls continues to have the benefit of the doubts as long as the S&P holds above 2650.   A failure to hold above 2650 has measured move to around 2515.

For now, 2750 represents key resistance.  Consecutive close above that level will open up for a test of the more important resistance around the 2870 zone.

In summary, Tuesday’s bearish shooting star candlestick together with the lagging Money Flow measure suggesting that an important near-term high has been established.  While there’s a high probability that the late-day selloff will momentum but an undercut below the 2650 is needed before there is any real prospect of a change in the short-term uptrend pressure.