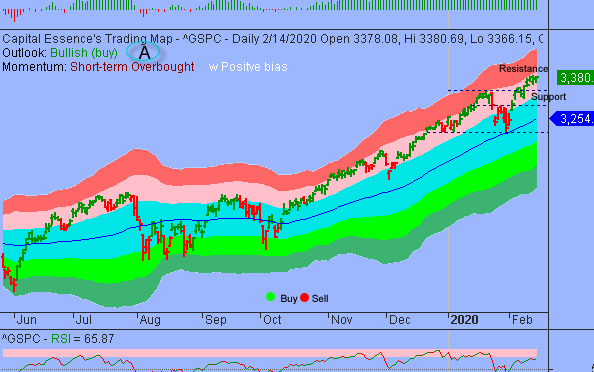 We’ve noted in the previous Market Outlook that: “the big picture remains the same. There is an orderly high level consolidation, which represents digestion period.  The fact that the index managed to hold on to most of recent gain in the face of such extreme overbought condition, indicating an internal strength.  This increases the probability that the S&P will break out to new highs as soon as the market shakes off the excessive bullishness.”  As anticipated, S&P swung between small gains and losses Friday as investors assessed contrasting data from China on how the coronavirus is spreading.  For the day, the bench mark gauge added 0.2 percent to 3,380.16. The Nasdaq Composite also advanced 0.2 percent to 9,731.18.  The Dow Jones Industrial Average slid 0.1 percent to 29,398.08.  The CBOE Volatility Index (VIX), widely considered the best gauge of fear in the market, fell more than 3 percent to close at 13.68.

Walmart (WMT) and Home Depot (HD) rose after U.S. retail sales climbed in January for a fourth straight month though the prior month’s gain was revised lower.  As such, the SPDR S&P Retail ETF (XRT) fell 0.2 percent on the day but is up more than 2 percent for the week.  Now the question is whether recent pullback is a pause that refreshes or it’s a beginning of something worse?  Below is an update look at a trade in XRT. 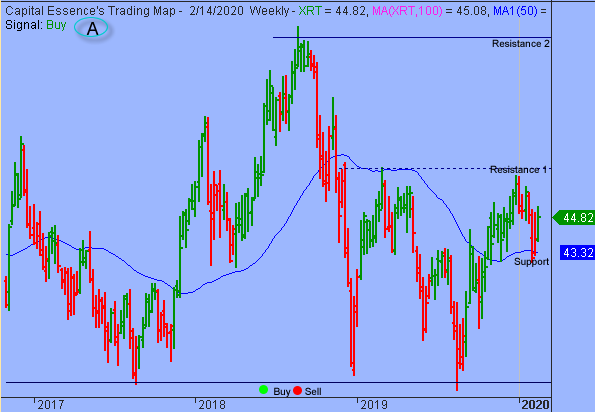 Our “U.S. Market Trading Map” painted XRT bars in green (buy) – see area ‘A’ in the chart. Over the past few weeks, XRT has been trending lower in a short-term corrective mode after the late August 2019 rally ran out of steam near the 46.50 zone, or the prior high set in early 2019.  The January correction found support near the 1-year moving average, a key technical level based on moving averages. Last week’s bullish reversal signal suggested that an important near-term low has been established and XRT is in an early stage of a new upswing with initial target near 46.50.  A sustain advance above that level could trigger acceleration toward the 53 zone, or the 2018 high.

XRT has support near 43.30.  Short-term traders could use that level as the logical level to measure risk against. 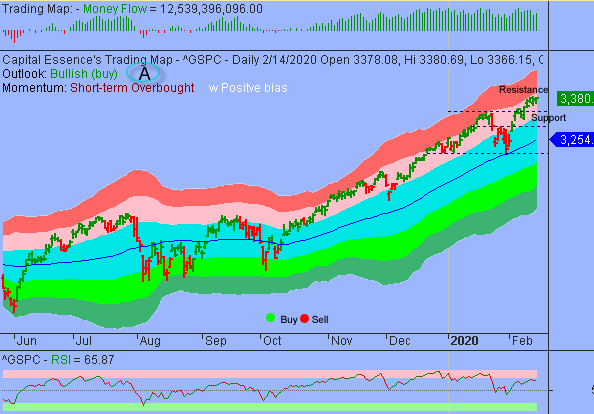 Not much has been changed.  Market is short-term overbought. S&P remains confined to a sideways trading pattern, which represented the digestion period in the aftermath of the early February massive rally.  Money Flow measure is above the zero line, indicating a positive net demand for stocks.  Technically speaking, the fact that the S&P managed to hold on to most of the massive gains in the face of overbought conditions suggested that the bulls are holding an edge for a short-term congestion mode, which is taking place within a context of an overall uptrend. With that said, if the index could hold above 3368 this week then a move above 3400 would be easier to achieve.

In summary, S&P remains in a short-term consolidation phase that reflects an indecisive market.  While overbought condition is likely keeping buyers at bay, support is strong near 3368.  While near-term risk is greater to the upside, markets are volatile and traders may prefer not to hold large positions overnight.