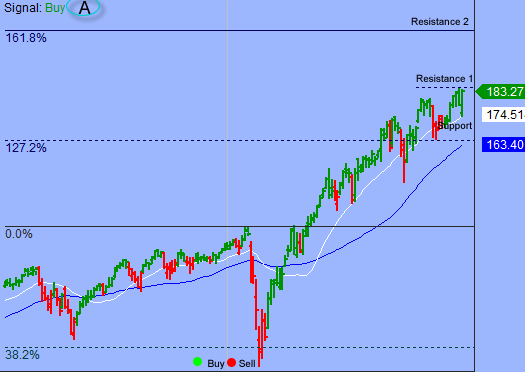 We’ve noted in the previous Market Outlook that: “our near-term work on price pattern and momentum suggested that the S&P could continue to drift higher as trading sentiment remains strong.” As anticipated, the S&P gained ground for the fourth straight session on Friday, extending a rally that pushed all three major U.S. stock indexes to record closing highs as upbeat earnings and signs of economic revival fueled investor risk appetite.  For the day, the S&P gained 1.01 percent to 4,411.79.  The Dow Jones Industrial Average rose 0.68 percent to 35,061.55 and the Nasdaq Composite added 1.04 percent to 14,836.99.  The CBOE Volatility Index (VIX) widely considered the best gauge of fear in the market, fell nearly 3 percent to 17.02.

Growth and value stocks seesawed for much of the week as market participants weighed spiking infections of the COVID-19 Delta variant against strong corporate results and signs of economic revival.  As such, the Consumer Discretionary Select Sector SPDR Fund (XLY) rose 0.89 percent on the day but is up 14 percent YTD, underperformed the S&P.  Now the question is what’s next?  Below is an update look at a trade in XLY. 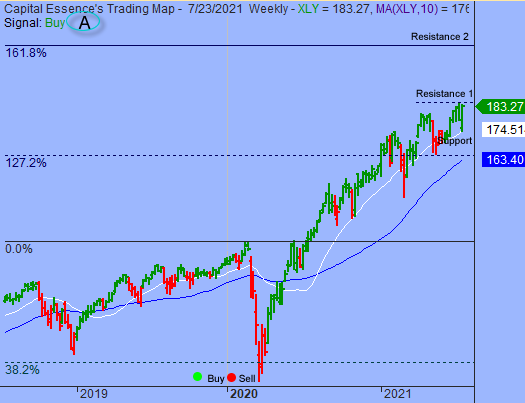 Our “U.S. Market Trading Map” painted XLY bars in green (buy) – see area ‘A’ in the chart.  Over the past few weeks XLY has been basing sideways near the prior high set in April as it works off overbought conditions.  Last week’s correction tested and respected support at the 2020 rising trend line.  The overall technical backdrop remains supportive of further advance.  Right now the most important thing to watch is the trading behavior near the 184 zone.  A close above that level on a weekly closing basis signifies a bullish breakout and trigger acceleration toward the 200 zone, or the 161.8% Fibonacci extension.

XLY has support around 174.  Short-term traders could use that level as the logical level to measure risk against. 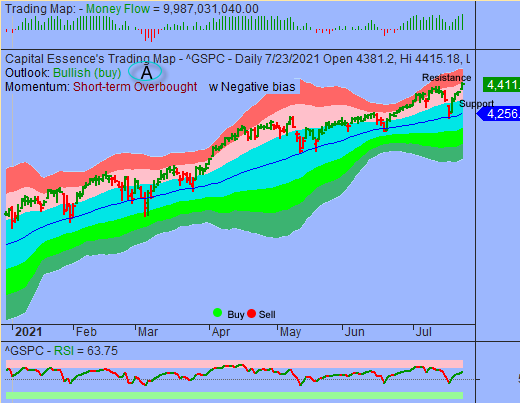 As expected, the S&P moved up to test resistance at the lower boundary of the red band after recent pullback found support at the trend channel moving average.  Money Flow measure trended higher above the zero line, indicating a positive net demand for stocks.  Momentum has been strengthened but the return of overbought conditions on an intraday basis will put a cap on the upside.  With this in mind, we’d look to reduce exposure into overbought strength, which might take the S&P closer to 4450 before a significant pullback unfolds.

As for support, S&P must holds above 4350 on a closing basis to prevent a test of the more important support at the 4260 zone.

In summary, S&P moved up to test resistance at the lower boundary of the red band after recent pullback found support near the trend channel moving average.  Overbought conditions have returned on an intraday basis but momentum remains supportive so downside risk could be limited.