We’ve noted in the previous Market Outlook that: “S&P developed a high volatility with fast up and down moves between 2570 and 2600.  While there is a low probability of a full blow correction we expect increase in near-term volatility as markets digest overbought conditions.”  As anticipated stocks traded lower in early Friday session that saw the S&P traded as low as 2,575.57 before buyers stepped and pushed prices off the intraday low.  For the day, the bench mark gauge declined 0.1 percent to 2,582.28.  The Dow Jones industrial average finished 0.17 percent lower at 23,422.21.  The Nasdaq composite finished just above the flatline at 6,750.94.  The CBOE Volatility Index (VIX), widely considered the best gauge of fear in the market, rose 7.52 percent to close at 11.29.

One of the more noteworthy developments in recent days has been the move in chip maker stocks.  The semiconductor sector bucked the overall trend after Nvidia (NVDA) posted earnings per share and revenue that easily beat analyst expectations. The company’s stock rose 5.3 percent and was the best performer in the S&P.  Semiconductor has been on fire this year that saw the iShares PHLX Semiconductor ETF (SOXX) is up more than 40 percent in 2017, outperformed the S&P by a wide margin. Now the question is whether the rally has more legs?  Below is an update look at a trade in SOXX.

Our “U.S. Market Trading Map” painted SOXX bars in red (sell).  After a strong run of outperformance since August, SOXX peaked last week at 179.05.  We wouldn’t read too much into Friday’s rally, which is merely an orderly low-level consolidation period in the aftermath of Thursday’s massive selloff.  For the near term, the ETF has carved out key short-term resistance and support levels for traders to monitor.  Immediate support is at the weekly pivot low, around 173.  That level roughly corresponds with the late October’s breakout point.  A close below that level has measured move to 171-162, based on the 20 day and 50 day moving averages.

SOXX has resistance near 177. Short-term traders could use that level as the logical level to measure risk against. 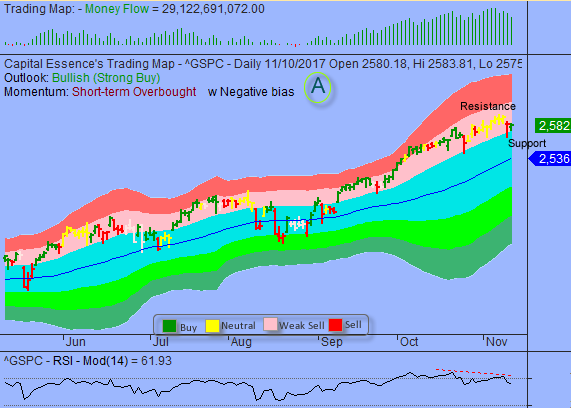 So far, there was no upside follow-through to Thursday’s bullish reversal signal.  While the action is not very encouraging, it is not unusual to see some sorts of consolidations after a big price swing.  Additionally, short-term overbought conditions are still in place, so it might take more than a few session for the pullback to run its course.

Longer term, Money Flow measure trended lower but still above the zero line, indicating a positive net demand for stocks.  This is a bullish development, suggesting the path with least resistance remains higher.

Short-term trading range: 2575 to 2615.  S&P has minor support near 2575.  A close below that level has measured move down 2536, based on the trend channel moving average.  The lower boundary of the red band, around 2615, represents key price level.  A close above that level often marked short-term market tops.  Traders should put it on the trading radar.

Long-term trading range: 2530 to 2630.  Unless there is a headline that everyone recognizes as extremely positive or negative, expect S&P to swing within this 100 points range.

In summary, the fact that the market had failed follow-through to Thursday’s bullish reversal signal indicating a lack of commitment among the bulls.  Short-term momentum is weak and overbought conditions are still in place, so it might take a couple of weeks for the pullback to run its course.