One of the more noteworthy developments in recent days has been the move in dividend stocks.  The group is continuing its strong 2017 performance with a healthy start in this first week of the last quarter of the year. The SPDR S&P Dividend ETF (SDY) has risen more than 7 percent YTD, trailing the S&P, which is up over 13 percent.  Now the question is whether the rally has more legs?  Below is an update look at a trade in SDY. 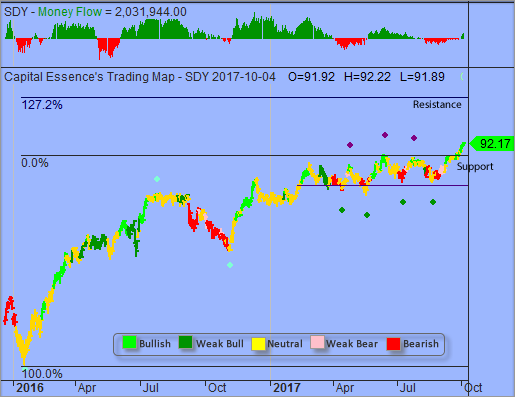 Our “U.S. Market Trading Map” painted SDY bars in bright green (strong buy).  The first dominant feature on the chart is the rising trend starting early 2016.  The second dominant feature of the chart is the sideways consolidation between 87 and 90 since early 2017, which represented an orderly high-level consolidation period.  The late September rally pushed the ETF above the summer highs, signify a bullish breakout and resumption of the 2016 upswing.  Money Flow measure trended higher from above the zero line, indicating a positive net demand.  This is a bullish development, supporting further upside follow-through and a test of the more important resistance in the 97-98 zone, based on the 127.2% Fibonacci extension.

SDY has support near 91.  Short-term traders could use that level as the logical level to measure risk against. 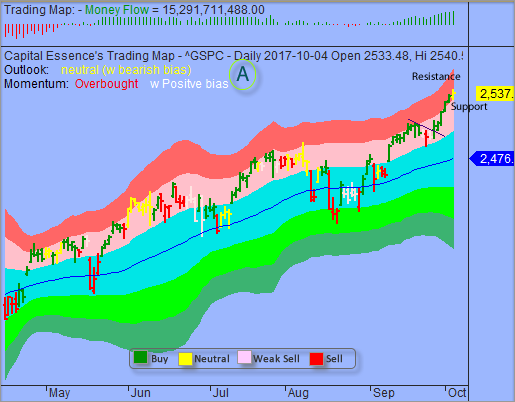 The most important feature in the daily chart of the S&P is momentum.  It had been relentless and up after the index set an interim low of 2417 in mid-August.  However, last week’s rally pushed the index above the lower boundary of the red band and into extreme overbought zone.  This is a short-term bearish development, suggesting the market is a bit ahead of itself.  Money Flow measure is above the zero line, indicating a positive net demand for stocks.  These elements suggested strongly that there is a higher than average odds that market is vulnerable to some short-term consolidations but pullback should be aggressively bought.

Short-term trading range: 2530 to 2560.  S&P has support near 2530.  A close below that level signals a short-term correction with downside target near 2500, based on the lower boundary of the pink band.  The upper boundary of the red band, currently at 2555, represents key price level.  Technically speaking, a trade above that level is unsustainable.  Traders should put it on the trading radar.

Long-term trading range: 2470 to 2570.  Unless there is a headline that everyone recognizes as extremely positive or negative, expect S&P to swing within this 100 points range.

In summary, our near-term work on momentum and price structure suggested that the S&P is in a process of building an important near-term top.  A close below the lower boundary of the red band will put the bears into the driver side of the market and a retest of the old consolidation high near 2500 should be expected.