Cooper Companies Inc. (COO) surged to new high Friday, up 8.43 percent to 238.32 after the company reported better-than-expected earnings.  This is definitely a positive sign going forward.  In fact, a closer look at the daily chart of COO suggests that the stock could climb above 300 in the coming days.  Just so that you know, initially profiled in our March 21, 2016 “Swing Trader Bulletin” COO had gained about 59% and remained well position.  Below is an update look at a trade in COO. 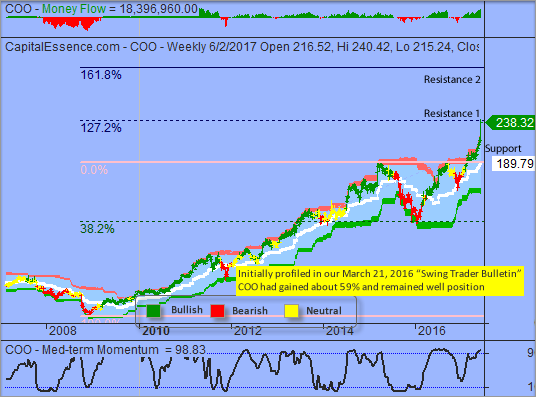 Our “U.S. Market Trading Map” rates COO as a Buy. The overall technical outlook remains Bullish.  Last changed February 3, 2017 from neutral.  COO has been on a tear in recent days following the early 2017 breakout.  Current rally is testing resistance at the 127.2% Fibonacci extension of the 2008-2015 upswing.  Money Flow measure held firmly above the zero line since the stock reached an interim low in late 2016, indicating there was little selling pressure.  This is a bullish development, supporting a breakout above the 127.2% Fibonacci extension and a rapid advance toward the next level of resistance at the 61.8% Fibonacci retracement, near 300.

COO has support near 222.  Short-term traders could use that level as the logical level to measure risk against.

The headlines haven’t been great over recent days, yet small-caps is nearly back to its recent high.  The iShares Russell 2000 ETF (IWM) outperformed last week, up 1.68%. According to our “U.S. Market Trading Map”, there could be more gains ahead for the ETF.  Below is an update look at a trade in IWM. 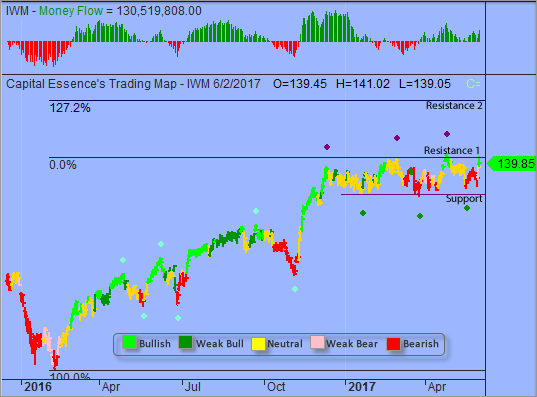 Our “U.S. Market Trading Map” painted IWM bars in bright green (strong buy).  The first dominant feature on the chart is the rising trend starting early 2016.  The second dominant feature of the chart is the sideways consolidation between 133 and 140 since early 2017, which represented the digestion period.  Last week’s rally pushed IWM up against the upper boundary of its multi-month trading range.  Money Flow measure trended higher from above the zero line, indicating a positive net demand.  This is a bullish development, supporting further upside follow-through and a test of the 127.2% Fibonacci extension, just above 153.  A close above the May high, around 140.80, will confirm this.

IWM has support near 133. Short-term traders could use that level as the logical level to measure risk against. 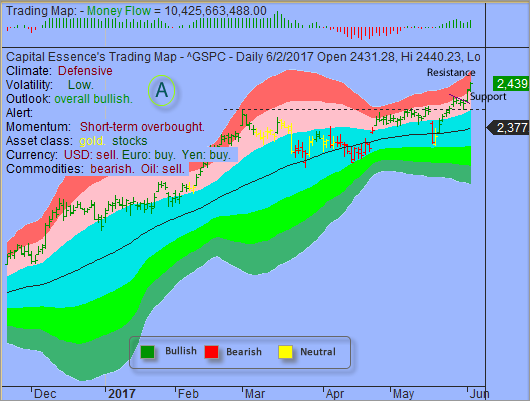 Short-term technical outlook remains bullish.  Last changed May 19, 2017 from neutral (see area ‘A’ in the chart).

Friday’s upside follow-through confirmed Thursday’s bullish breakout.  S&P trades in broad trading bands that define the trend behavior. The upswing was very rapid with some short-term consolidation near each of the significant support or resistance levels. These support and resistance levels also define the limits and barriers to any future rally and uptrend development.

Money Flow measure is still above the zero line, suggesting the bulls were much more aggressive as prices rallied than bears were as prices dropped and that net demand was strong.  In fact, all brief pullbacks since the last November have been met with aggressive wave of buying interest.   This is a bullish development, suggesting the path with least resistance is higher.  The market however, is overbought following last week’s rally so we’d be cautious against taking large position at this stage of a rally.

Short-term trading range: 2430 to 2455.  S&P has minor support near 2430. If the index starts coming under 2430, it would imply more supply is coming into the market.  And S&P might have to move to a much lower level to attract new buyers as a consequence. As for resistance, the upper boundary of the red band, near 2455, represents key price level.  A trade above that level often unsustainable.

Long-term trading range: 2350 to 2450.  Unless there is a headline that everyone recognizes as extremely positive or negative, expect S&P to swing within this 100 points range.

Bottom line, while S&P could continue to drift higher as trading sentiment remains strong, market will have a tough time hold on to the gains given overbought conditions.  With this in in mind, we would consider taking down exposure into additional strength, which we think could take the S&P closer to the upper boundary of its short-term trading range before a significant pullback unfolds.