We’ve noted in the previous Market Outlook that: “S&P bounced off the trend channel moving average…Money Flow measure trended higher from above the zero line, indicating an increase in buying pressure so the likelihood of a false move is low.”  As anticipated, S&P closed higher Thursday, gained 6.93 points, or 0.29 percent, to end at 2,368.06.  The Dow Jones industrial average rose 69.17 points, or 0.33 percent, to close at 20,728.49.  The Nasdaq composite advanced 16.80 points, or 0.28 percent, to close at 5,914.34.  The CBOE Volatility Index (VIX), widely considered the best gauge of fear in the market, rose 1.05 percent to 11.54.

Sociedad Quimica y Minera de Chile SA (SQM) was a notable winner Thursday, rose 1.24 percent on strong volume to 34.27 – a whisker below the 52-week high set in February.  This is bullish from a technical perspective.  In fact, a closer look at the daily chart of SQM suggests that the stock could climb above 38 after the downward trend halted.  Just so that you know, initially profiled in our January 25, 2017 “Swing Trader Bulletin” SQM had gained about 15% and remained well position.  Below is an update look at a trade in SQM. 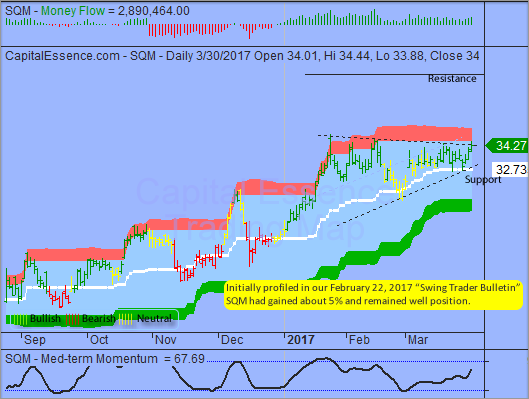 As indicated in the above chart, our “U.S. Market Trading Map” rates SQM as a Buy. The overall technical outlook remains Bullish.  Last changed March 15, 2017 from neutral.

Following the massive rally in late December, SQM has been coiled into a tight trading range as it worked off the extreme overbought conditions.  Money Flow measure held firmly above the zero line, indicating there was little selling interest.  Thursday’s upside breakout had helped clear resistance at the January falling trend line, suggesting that the 3-month triangle pattern had resolved itself into a new upswing.  Given the size of the pattern, the measured move is about 12 percent higher at 38.60 zone.  A close above the January high of 34.84 will confirm this.

The trend channel moving average (as represents by the white line in the chart), currently at 32.73, represents the logical level to measure risk against.  All bets are off should SQM close below that level.

Consumer Discretionary SPDR ETF (XLY) broke out to new high Thursday, up 0.26 percent to close at 87.94.  For starters, XLY focuses on the consumer discretionary segment of the U.S. market.  Top holdings are Amazon (AMZN), Home Depot (HD) and Comcast (CMCSA).  The ETF is up about 18% from its 52-week low of 74.18.  And there are more gains in store for this ETF, according to our “U.S. Market Trading Map”.  Below is an update look at a trade in XLY. 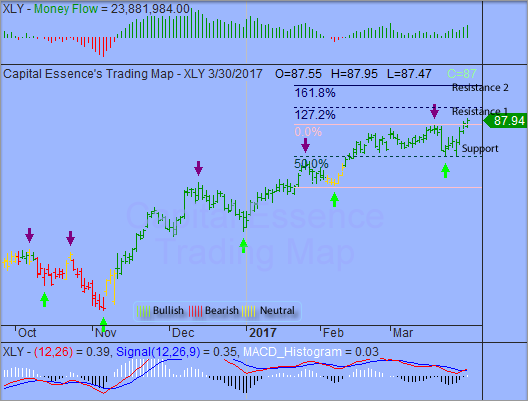 As indicated in the above chart, our “U.S. Market Trading Map” was looking at XLY from a Buy side back in March 22, 2017. Thursday’s upside follow-through confirmed Wednesday’s bullish breakout above the March high.  With an exception of a brief pullback in early February, Money Flow measure held firmly above the zero line since the ETF reached an interim low in November 2016, indicating there was little selling interest. The potential here is for a continued trend higher toward the 127.2% Fibonacci extension of the February-March upswing near 88.70.  A breakout above there has a measured move to 90, based on the 161.8% Fibonacci extension. With respect to key levels, short-term traders could use Tuesday’s breakout point of 86.80 as the logical level to measure risk against. 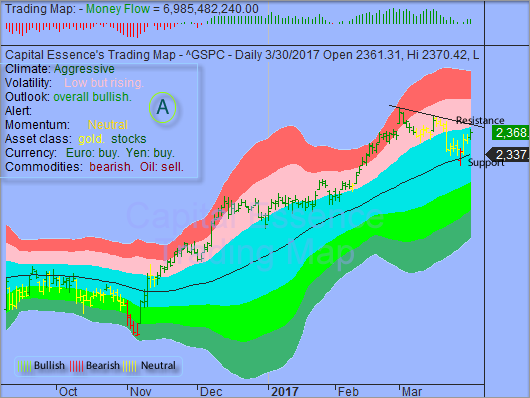 As expected, S&P moved up to test resistance at the lower boundary of the pink band after falling below that level last week.  That level coincides with March falling trend line, now 2376.  Money Flow measure trended higher from above the zero line, indicating an increase in buying pressure. This increases the likelihood of a sustain breakout.  A breakout above 2376 has a measured move to the March high of 2400.  For short-term traders, Monday’s low of 2322 marks an important stop.  A break down below that level risks a resumption of the recent downtrend towards the important sentiment 2300 mark.

Short-term trading range: 2337 to 2376.  S&P has minor support near 2337-2322. A failure to hold above that level suggests shows that most of the potential buyers at this level had already placed their bets.  The next batch of buyers typically sits at a much lower level. The result is that the decline has a clear run down to the next support level at 2300.  Immediate resistance is near 2375.  A close above that level will turn the short-term trend up and a retest of the March high is likely.

Long-term trading range: 2300 to 2400.  Unless there is a headline that everyone recognizes as extremely positive or negative, expect S&P to swing within the 100 point range, between 2300 and 2400.

Bottom line, while the intermediate to long term technical outlook remains very constructive, there is no big commitment to accumulate stocks aggressively at this point given the looming resistance near S&P’s 2376.  What this means is that as the S&P inches into the area of key overhead resistance, aggressive sellers will most likely dips in their toes to see how the market reacts.  So, we’d be cautious against chasing breakouts.