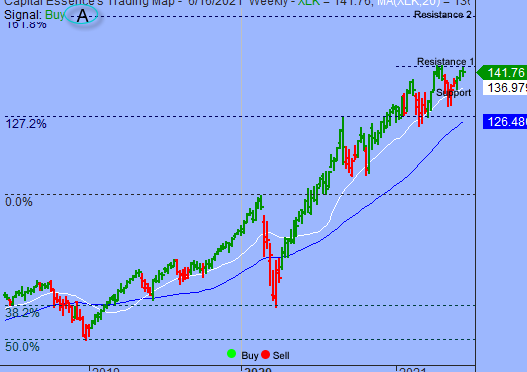 We’ve noted in the previous Market Outlook that: “S&P rally attempt failed at formidable resistance.  If the index fails to hold above 4240, then the next stop will be 4200 with the possibility of a brief breakdown below that level.”  As anticipated, S&P fell Wednesday amid sharp rise in U.S. bond yields after the Federal Reserve delivered a hawkish surprised, signaling two interest rates hikes by the end of 2023.   For the day, the bench mark gauge fell 0.61 percent, the Dow Jones Industrial Average was down 0.59 percent and the Nasdaq Composite was down 0.08 percent.  The CBOE Volatility Index (VIX) widely considered the best gauge of fear in the market, rose about 5 percent to 17.86.

Growth sectors of the market like tech, which typically boasts higher valuation that are unattractive in a rising rate environment, pared some of their post-Fed losses. Oracle (ORCL) fell 5 percent after its softer second-quarter guidance offset first-quarter results that beat on both the top and bottom lines.  As such, the Technology Select Sector SPDR Fund (XLK) fell 0.54 percent on the day and is up about 9 percent YTD, underperformed the S&P.  Now the question is what’s next?  Below is an update look at a trade in XLK. 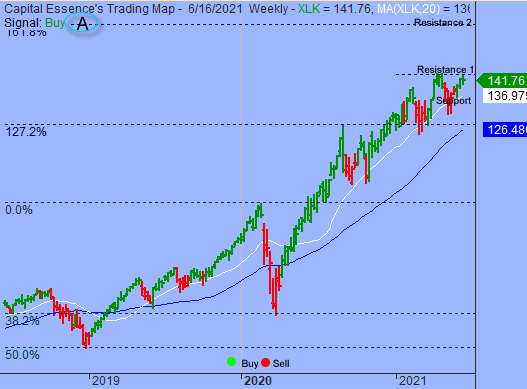 Our “U.S. Market Trading Map” painted XLK bars in green (buy) – see area ‘A’ in the chart.  XLK has been on a tear in recent days after the late April correction found support near the 2020 rising trend line, the level that offered support since the ETF reached an interim low in early 2020. This week’s rally pushed XLK toward the 144 zone, or the prior high set in early April.  The overall technical backdrop remains positive suggesting that the resistance might not hold for long. A close above 144 on a weekly closing basis will bring 160 zone or the 161.8% Fibonacci extension into view.

XLK has support around 137.  Short-term traders could use that level as the logical level to measure risk against. 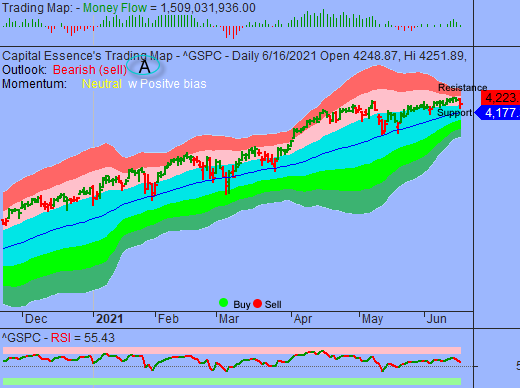 S&P moved down to test support at the important sentiment 4200 mark after recent rally found some resistance near the lower boundary of the red band.  Money Flow measure trended lower from above the zero line, indicating a weak net demand for stocks.  Momentum indicator shifted lower from near overbought zone, suggesting further short-term weakness likely.  Right now, the most important thing to watch is the retreat and rebound behavior near 4200.  A close below that level will bring the trend channel moving average, currently at 4177, into view.  We’d turn particular bearish if the index closes twice below that level.

On the upside, the lower boundary of the red band, or extreme overbought zone, around 4265, represents key resistance.  Technically speaking, the normal behavior for the S&P has been to consolidate and retreated almost every time it traded above that level so there is a high probability that a significant consolidation pattern will again develop in this area.

In summary, S&P shifted to short-term overbought consolidation phase.  4200 is the line in the sand.  The longer the index stays near that level, the more vulnerable it is to lower prices.  This is the real danger in the current market.