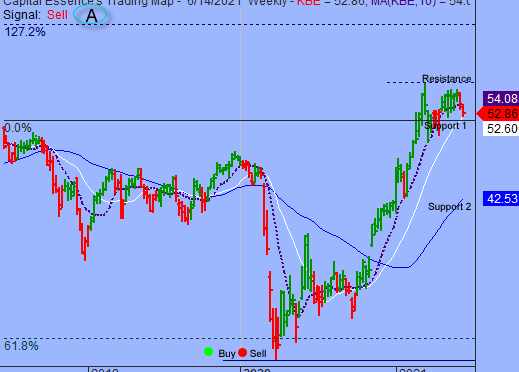 We’ve noted in the previous Market Outlook that: “S&P cleared key resistance, breaking out above the all-time high set in May.  Consecutive close above 4236 this week would confirm last week’s bullish breakout signal, supporting upside follow-through in the days ahead.  However, market is short-term overbought following recent advance. There could be a sell-off in the offing but it would be shallow if so.”  As anticipated, S&P traded lower for most of Monday session amid some warning of a hawkish surprise from the Federal Reserve later this week before buyers stepped in near the close and pushed prices higher.  For the day, the bench mark gauge gained about 0.2 percent to a record close 4,255.15.  The Nasdaq Composite was up 0.74 percent to close a record high of 14,174.14.  The Dow Jones Industrial Average slipped nearly 0.32 percent to 34,393,75. The CBOE Volatility Index (VIX) widely considered the best gauge of fear in the market, rose about 5 percent to 16.35.

Financials slipped more than 1 percent, paced by a drop in banking stocks after JPMorgan’s chief executive Jamie Dimon warned the that pandemic-led boom in trading revenue for JPMorgan could be nearing an end.  Fixed-income trading revenue JPMorgan will be just above $6 billion in the second quarter, Dimon said Monday at a Morgan Stanley virtual conference.  JPMorgan Chase & Co (JPM), Citigroup (C) and Goldman Sachs Group (GS) were down more than 1 percent.  As such, the SPDR S&P Bank ETF (KBE) fell 1.47 percent on the day but is up more than 26 percent YTD, outperformed the S&P.  Now the question is what’s next?  Below is an update look at a trade in KBE. 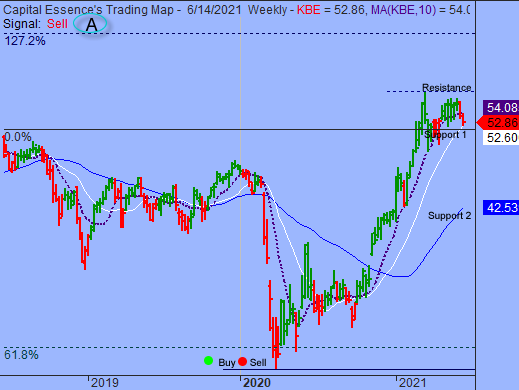 Our “U.S. Market Trading Map” painted KBE bars in sell (sell) – see area ‘A’ in the chart.  Over the past few weeks, KBE has been trending lower in a short-term corrective mode after the April rally ran out of steam near the prior high set in late March.  This week’s selloff pushed the ETF down to the closely watch 52 zone, or the early 2018 high and the late 2021 rising trend line.  The overall technical backdrop deteriorated following recent selloff, suggesting that the support might not hold for long.  A close below 52 on a weekly closing basis will bring the one-year moving average, around 43, into view.

KBE has resistance around 56.50.  Short-term traders could use that level as the logical level to measure risk against. 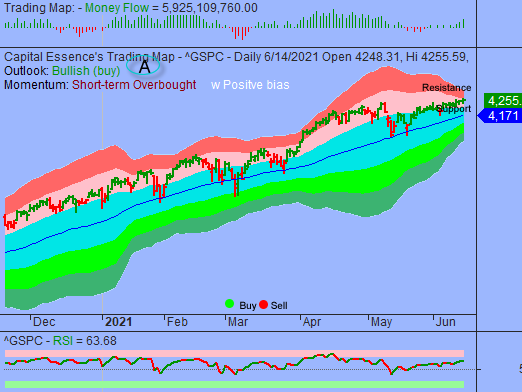 S&P continues drifting higher after breaking above the May high last week.  This is a positive development but let’s notice this week’s rally pushed the index up against the lower boundary of the red band, or extreme overbought zone.  As mentioned, a trade above that level indicates extreme overbought conditions.  The normal behavior for the S&P has been to consolidate and retreated almost every time it traded above that level so there is a high probability that a significant consolidation pattern will again develop in this area.  Nonetheless, the fact that the S&P managed to hold on to most of recent gains despite overbought conditions is impressive.  This certainly would argue that the near-term risk remains to the upside.  With this in mind we’d look to increase upside exposure into short-term market dips.

In summary, S&P could continue to drift higher as trading sentiment remains strong.  So, it seems to us that the overbought conditions can be sustained for a few days, potentially allowing for a test of 4300 before a significant pullback unfolds.