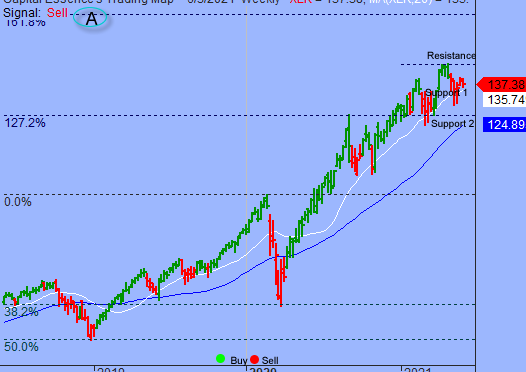 We’ve noted in the previous Market Outlook that: “technical pressures are building up as the market dances its way into an increasingly tight trading range. S&P’s 4200 marks the inflection point.  A failure to hold above key level indicates a change in sentiment and a much deeper pullback should be expected.”  As anticipated, S&P ended lower Thursday, down 0.4 percent to 4,192.85, as investors awaited the jobs report due Friday that could intensify bets on the Fed tapering bond purchases sooner rather later.  The Dow Jones Industrial Average closed down less than 0.1 percent to 34,577.04. The technology-heavy Nasdaq Composite fell 1 percent to 13,614.51.  The CBOE Volatility Index (VIX) widely considered the best gauge of fear in the market, rose more than 3 percent to 18.04.

Tech, meanwhile, was a drag on the broader markets as the sector’s recent revival appears to running out of steam.  Google-parent Alphabet (GOOGL), Apple (AAPL), Amazon.com (AMZN), Microsoft (MSFT) and Facebook (FB) ended more than 1 percent lower.  As such, the Technology Select Sector SPDR Fund (XLK) fell 0.93 percent on the day but is up about 6 percent YTD, underperformed the S&P.  Now the question is what’s next?  Below is an update look at a trade in XLK. 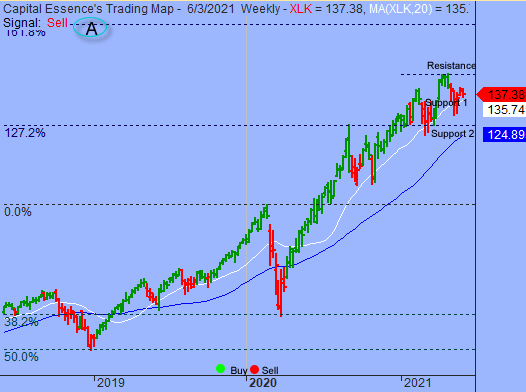 Our “U.S. Market Trading Map” painted XLK bars in red (sell) – see area ‘A’ in the chart.  Over the past few weeks, XLK has been trending lower after the early March rally ran out of steam just above the prior high set early this year.  This week’s selloff pushed the ETF down to the 2020 rising trend line, the level that offered support since the ETF climbed above it in early 2020.  The overall technical deteriorated following recent decline, suggesting that the support might not hold for long.  A close below 135 on a weekly closing basis will bring the 125, or the 1-year moving average, into view.

XLK has resistance around 143.  Short-term traders could use that level as the logical level to measure risk against. 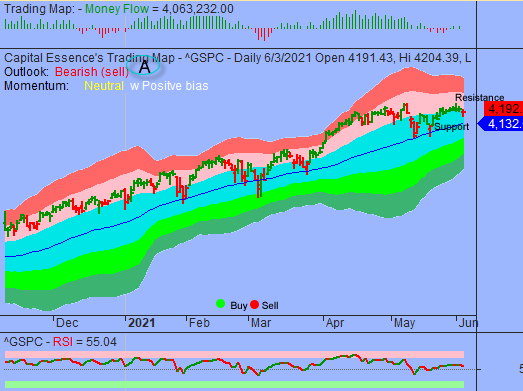 As expected, the S&P moved down to test support at the 4170 zone after recent rally ran out of steam near the lower boundary of the pink band.  That level roughly corresponds with the prior high set in May.  Market internal has been deteriorated following recent setback but downside momentum does not appeared strong enough to generate widespread breakouts.  With that said we wouldn’t read too much into Thursday trading action as it keeps the S&P within its short-term consolidation phase.

Right now follow-through is the key.  A close below 4170 is outright bearish and a much deeper pullback should be expected and we’re looking at 4132, based on the trend channel moving average.

For now, the May high, around 4236, acted as strong resistance.  A close above it is required to neglect the short-term sideways trading pattern.  With that said, there is no reason to turn particularly bullish until this area is eclipsed.

In summary, S&P is in a midst of short-term consolidation phase that reflects an indecisive market.  While near-term risk is greater to the downside, markets are volatile and traders may prefer not to hold large positions overnight.