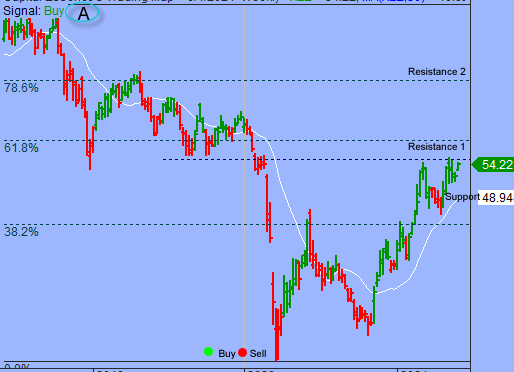 We’ve noted in the previous Market Outlook that: “although overbought condition is keeping buyers at bay, the early May high around S&P’s 4236 continues to act as price magnet.  Short-term traders can anticipate increase in short-term volatility with rapid up and down moves in the market.”  As anticipated, S&P moved higher in early Tuesday session, traded as high as 4,234 before sellers stepped in and pushed prices lower. For the day, the bench mark gauge fell less than 0.1 percent to 4,202.04.   The Nasdaq Composite ended the day down nearly 0.1 percent to 13,736.48.  The Dow added 0.13 percent to end the day at 34,575.31.  The CBOE Volatility Index (VIX) widely considered the best gauge of fear in the market, jumped about 7 percent to 17.90.

Energy stocks attracted strong buying support as U.S. oil prices rose to their highest levels since October 2018 on bets of increasing energy demand after OPEC and its allies reportedly agreed to raise production by about 450,000 barrels per day starting July.  As such, the Energy Select Sector SPDR Fund (XLE) jumped 3.85 percent on the day and is up more than 43 percent YTD, outperformed the S&P.  Now the question is what’s next?  Below is an update look at a trade in XLE. 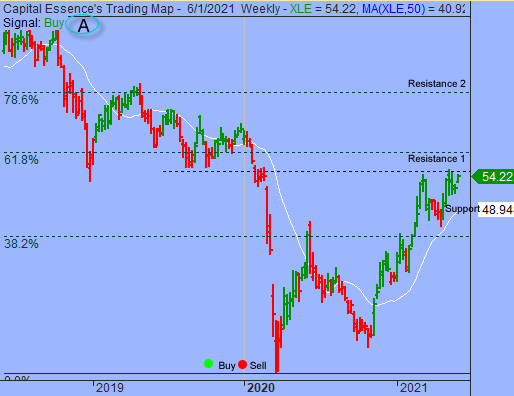 Our “U.S. Market Trading Map” painted XLE bars in green (buy) – see area ‘A’ in the chart.  Over the past few weeks, XLE has been basing sideways near the early 2020 breakdown points after bounced off support at the late 2020 rising trend line.  The overall technical backdrops remains positive, suggesting that the May consolidation is merely a short-term pause and that the ETF will take a new leg higher as soon as it works off excessive optimism.  Over the next few weeks, traders should monitor trading behavior as the 55.50-58 zone is tested as resistance.  A close above 58 on a weekly closing basis will trigger acceleration toward the 67 zone, or the 78.6% Fibonacci extension.

XLE has support around 49.  Short-term traders could use that level as the logical level to measure risk against. 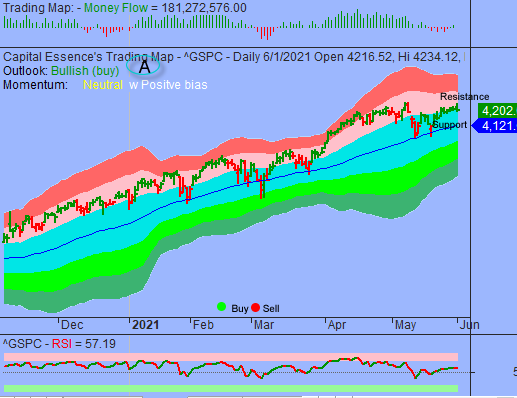 Once again, the S&P sold off after the early rally attempt ran out of steam near the prior high set in early May, which roughly corresponds with the lower boundary of the pink band.  That level was significant when the index fell below it in early May.  Technically speaking, the longer the index holds below this resistance the stronger it becomes.  Adding to concerns is Money Flow measure, which hover near the zero line, indicating a weak net demand for stocks.  Momentum has been weakened but downside momentum does not appear strong enough to generate a widespread breakdown.  Right now, the most important thing to watch is the retreat and rebound behavior near 4200-4170.  A failure to hold above 4170 will bring the trend channel moving average, just above 4100, into view.

In summary, S&P rally attempt failed at formidable resistance.  If the index fails to hold above 4170 this week, then the next stop will be 4120 with the possibility of a brief breakdown below that level.