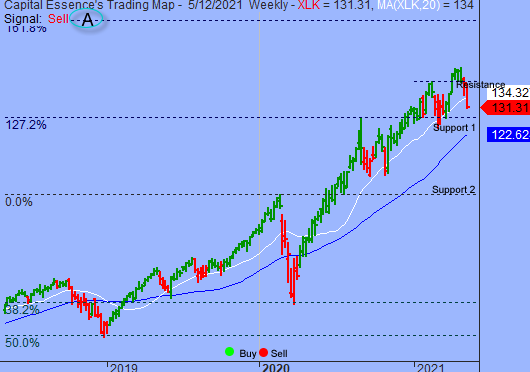 Good Morning, this is Capital Essence’s Market Outlook (the technical analysis of financial markets) for Thursday May 13, 2021.

Investors continued to shun growth stocks like technology, which have higher valuations that are less attractive in an inflationary environment, where money today is worth more than money in the future.  Google-parent Alphabet (GOOGL) fell 3 percent, while Apple (AAPL), Amazon.com (AMZN) and Microsoft MSFT) fell more than 2 percent. Facebook (FB) closed down 1.3 percent.  As such, the Technology Select Sector SPDR Fund (XLK) fell 2.81 percent on the day but is up 1 percent YTD, underperformed the S&P.  Now the question is what’s next?  Below is an update look at a trade in XLK. 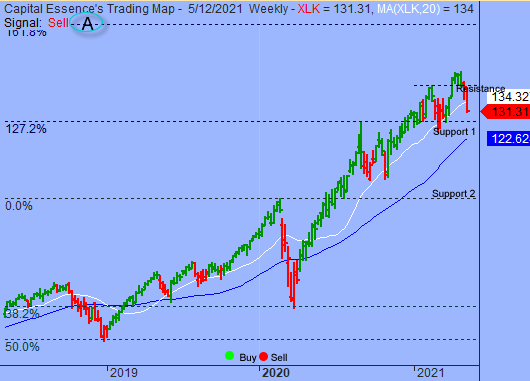 Our “U.S. Market Trading Map” painted XLK bars in red (sell) – see area ‘A’ in the chart.  over the past few weeks, XLK has been trending lower in a short-term corrective mode after the late March rally ran out of steam just above the prior high set earlier this year.  This week’s selloff pushed the ETF below the 2020 rising trend line signifies a bearish breakdown and downside reversal.  The overall technical backdrop deteriorated following recent selloff suggesting that the ETF might have to move to a much lower level to attract new buyers and we’re looking at the 128-123 zone, or the 127.2% Fibonacci extension and the 1-year moving average.  A failure to hold above 123 has measured move to around 100.

XLK has resistance around 14.  Short-term traders could use that level as the logical level to measure risk against. 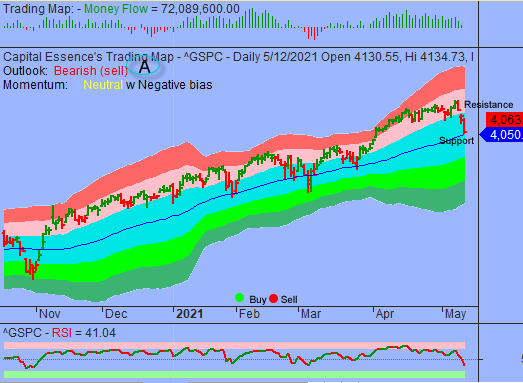 S&P moved down to test support at the trend channel moving average after falling below the lower boundary of the pink band on Tuesday.  Momentum indicator has been weakening following recent selloff. Money Flow measure is on a verge of falling below the zero line, suggesting that the bears were more aggressive as prices dropped than the bulls were as prices ascended.

The index could signal a downward trajectory, depending on how it closes over the next few days.  The trend channel moving average, currently at 4050, represents key support.  If it closes below that level, the next leg is likely lower, and we’re looking at 3940.

On the upside, S&P has 4170 to trade against.  The longer the index holds below that level the more vulnerable it is to lower prices.

In summary, S&P will have a downward bias this week, pressured by short-term negative momentum but we expect support at the trend channel moving average to remain largely intact.  There is a high probability that market is in for a ‘range-bound’ trading environment.  This is a rally and retreat environment. It is not a trending environment. Short-term traders can anticipate continued volatility with rapid up and down moves in the markets.