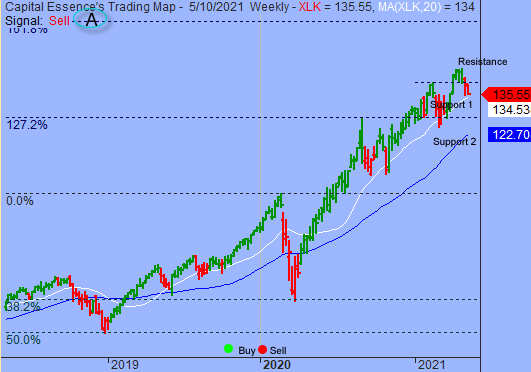 Good Morning, this is Capital Essence’s Market Outlook (the technical analysis of financial markets) for Tuesday May 11, 2021.

We’ve noted in the previous Market Outlook that: “overbought conditions have returned on an intraday basis so some downside retracement cannot be ruled out this week.”  As anticipated, stocks closed lower Monday as rotation from tech to economically sensitive cyclicals areas of the market continued as investors shun longer-duration growth stocks amid ongoing inflation pressures and worries about an eventual Federal Reserve.  The Nasdaq Composite dropped 2.5 percent to 13,401.86.  The Dow Jones Industrial Average cut gains and turned negative rapidly in the final minutes of the session, down 0.1 percent to 34,742.82, after climbing more than 300 points to another record high.  The S&P fell 1 percent to 4,188.43.  The CBOE Volatility Index (VIX), widely considered the best gauge of fear in the market, surged more than 17 percent to 19.57.

Google-parent Alphabet (GOOGL), and Facebook (FB), were downgraded to neutral from buy by Citigroup (C) on worries that ad-revenue growth is set to wane.  As such, the Technology Select Sector SPDR Fund (XLK) fell 2.52 percent on the day but is up more than 4 percent YTD, underperformed the S&P.  Now the question is what’s next?  Below is an update look at a trade in XLK. 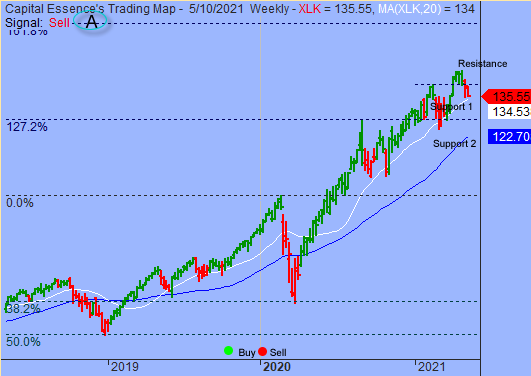 Our “U.S. Market Trading Map” painted XLK bars in red (sell) – see area ‘A’ in the chart.  Over the past few weeks, XLK has been trending lower in a short-term corrective mode after the late March rally ran out of steam just above the prior high set in early 2021.  This week’s selloff pushed the ETF down to the 2020 rising trend line.  The overall technical deteriorated following recent selloff suggested that the support might not hold for long.  A close below 134 on a weekly closing basis will bring the 1-year moving average, just below 123, into view.

XLK has resistance around 144.  Short-term traders could use that level as the logical level to measure risk against. 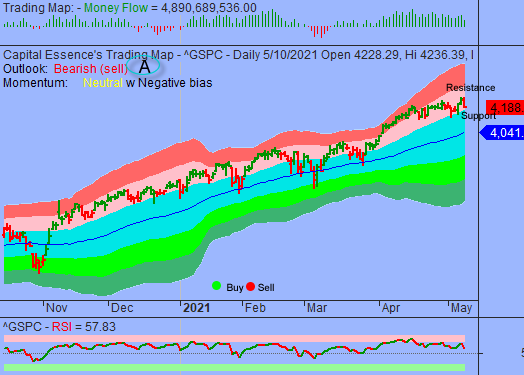 Short-term technical outlook shifted to bearish (sell).  Last changed May 10, 2021 from remains bullish (buy) – (see area ‘A’ in the chart).

Once again, the S&P retreated after the early rally attempt ran out of steam just above the psychological 4200 mark.  That level was tested in several times over the past weeks.  This history indicated an important role in terms of resistance.  Market internal has been deteriorated following recent setback but downside momentum does not appeared strong enough to generate widespread breakouts.  With that said we wouldn’t read too much into Tuesday trading action as it keeps the S&P within its short-term consolidation phase.

Over the next few days, the most important thing to watch is the retreat and rebound behaviors as the lower boundary of the pink band, currently at 4175, is tested as support. That level was significant when the index climbed above it in late March.  When strong support is broken it means that near-term buying pressure has finally been exhausted.  With that said, a close below 4175 is outright bearish and a much deeper pullback should be expected and we’re looking at the low 4000s, based on the trend channel moving average.

In summary, S&P shifted to short-term consolidation phase which is taking place within the context of a long-term uptrend.  While near-term risk is greater to the downside, markets are volatile and traders may prefer not to hold large positions overnight.