Good Morning, this is Capital Essence’s Market Outlook (the technical analysis of financial markets) for Monday May 10, 2021.

We’ve noted in the previous Market Outlook that: “an important near-term low had been established and the S&P is in an early stage of a new upswing that targeting the prior high set in late April.”  As anticipated, S&P closed at record highs Friday, up 0.74 percent to close at record of 4,232.60, following report that U.S. economy created 266,000 jobs in April, below the 770,000 seen the prior month and well short of the 976,000 jobs economists had forecast.  The weak job report cast doubt somewhat on the recovery, and eased fears that the Fed may have to start to talk about tapering its bond purchase.  The Dow Jones Industrial Average rose 0.66 percent to 34,777.76 and the Nasdaq Composite gained 0.88 percent.  The CBOE Volatility Index (VIX), widely considered the best gauge of fear in the market, fell nearly 9 percent to 16.69.

Industrials sector led market higher as an unexpectedly weak April jobs report cooled fears the Federal Reserve may be forced to tighten policy sooner than many expect to curb an overheating economy.  As such, the Industrial Select Sector SPDR Fund (XLI) rose 1.06 percent on the day and is up 19 percent YTD, outperformed the S&P.  Now the question is what’s next?  Below is an update look at a trade in XLI. 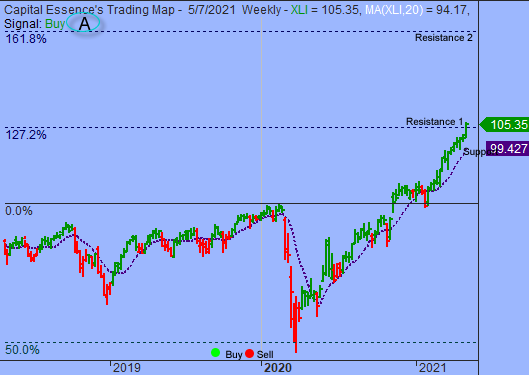 Our “U.S. Market Trading Map” painted XLI bars in green (buy) – see area ‘A’ in the chart.  XLP has been on a tear in recent days after breaking out above the late 2020 sideways trading range in February.  Last week’s rally pushed the ETF above the closely watched 104 zone, or the 127.2% Fibonacci extension. This is a positive development, opened up for a test of the more important resistance at the 161.8% Fibonacci extension, just below the 130. The overall technical backdrop remains supportive of further advance.  A consecutive close above the 104 will confirm this.

XLI has support around 100.  Short-term traders could use that level as the logical level to measure risk against. 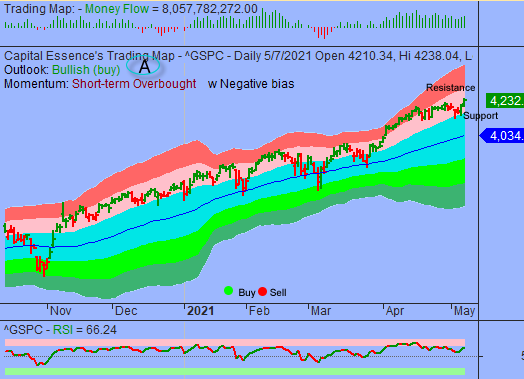 Key technical development in Friday session was a clear break above the prior high set in late April. Market is short-term overbought following recent advance. Nonetheless, Money Flow measure had trended higher from above the zero line, indicating that net demand for stocks was strong.  This suggests that the index may extend the uptrend that dominated the market since last spring.  A consecutive close above 4220 will confirm this.  The next resistance level for the S&P is around the psychological 4300 mark.  That level roughly corresponds with the lower boundary of the red band, or extreme overbought zone.  The normal behavior for the S&P has been to consolidate and retreated almost every time it traded above that level so there is a high probability that a significant consolidation pattern will again develop in this area.

For now, 4200 is the line in the sand.  We’d turn particular bearish if the index closes twice below that level.  With that said, a failure to hold above 4200 indicated that long-term buying pressure has been exhausted and a much deeper pullback should be expected and we’re looking at the low 4000s, based on the trend channel moving average.

In summary, overbought conditions have returned on an intraday basis so some downside retracement cannot be ruled out this week. However, the near-term technical outlook remains positive, suggesting that the path with least resistance remains higher as long as the S&P holds above 4200.