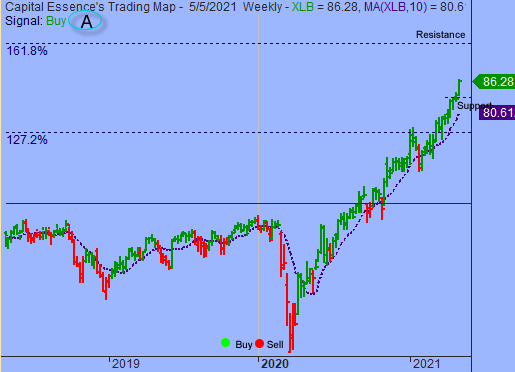 Good Morning, this is Capital Essence’s Market Outlook (the technical analysis of financial markets) for Thursday May 6, 2021.

We’ve noted in the previous Market Outlook that: “the bullish reversal doji candlestick pattern in the S& together with the solid technical backdrop suggested strongly that the market is at or very close to a near-term low.  So it wouldn’t surprise us to see at least an attempt to rally over the next couple of days.”  As anticipated, S&P closed higher but off intraday high, up 0.1 percent to 4,167.59, as technology cut gains while cyclicals continued to advance despite a surprise decline in U.S. services activity and weaker labor market data.  The Dow Jones Industrial Average rose 0.28 percent to 34,230.02.  The Nasdaq Composite fell 0.4 percent to 13,582.42, however, as Amazon, Netflix and Facebook all dipped more than 1 percent.  The CBOE Volatility Index (VIX), widely considered the best gauge of fear in the market, fell about 2 percent to 19.15.

Cyclicals including materials and financials supported the broader market’s move higher as optimism over the economy continued despite weaker labor market and services data.  ISM nonmanufacturing data for April fell a reading of 62.7, missing expectations of 64.30.  private payrolls grew by 742,000 for April, according to a report released Wednesday by ADP and Moody’s Analytics. That missed economists’ forecast of 800,000.  As such, the Materials Select Sector SPDR Fund (XLB) rose 1.27 percent on the day and is up more than 19 percent YTD, outperformed the S&P.  Now the question is what’s next?  Below is an update look at a trade in XLB. 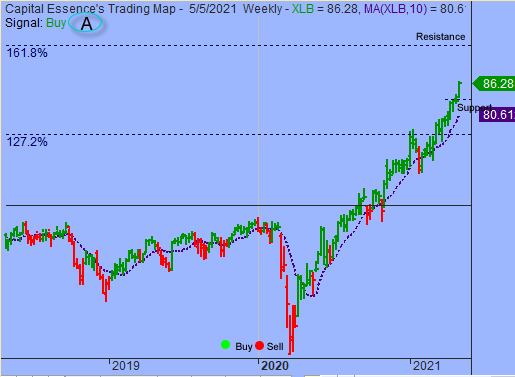 Our “U.S. Market Trading Map” painted XLB bars in red (sell) – see area ‘A’ in the chart.  XLB has been on a tear in recent day after breakout above the early 2021 high in early March.  This week’s rally pushed the ETF above the closely watch 83 zone, or the April congestion zone, signifies a bullish breakout.  The overall technical backdrop remains supportive of further advance.  So it seems to us that the March rally could carry XLB up to the next level of resistant at the 161.8% Fibonacci extension, around 93.

XLB has support around 81.  Short-term traders could use that level as the logical level to measure risk against. 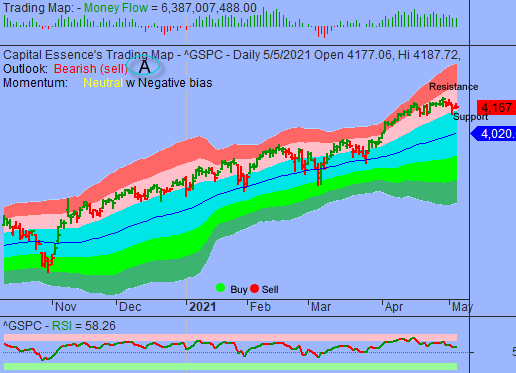 Not much has been changed since last update.  S&P continues basing sideways using the lower boundary of the pink band as support.  Money Flow measure trended lower from above the zero line, indicating a lack of commitment among the bulls. Momentum indicator whipsaws below overbought zone, suggesting further backings and fillings likely.

For now, 4160 is the line in the sand.  We’d turn particular bearish if the index closes twice below that level.  With that said, a failure to hold above 4160 indicated that long-term buying pressure has been exhausted and a much deeper pullback should be expected and we’re looking at the low 4000s, based on the trend channel moving average.

On the upside, S&P has 4200 to trade against.  A sustain breakout above that level will trigger acceleration toward the upper boundary of the red band.

In summary, despite Wednesday’s recovery bounce, the near-term technical bias skewed toward further weakness than strength.  S&P’s 4160 marks the inflection point.  A failure to hold above key level indicates a change in sentiment and a much deeper pullback should be expected.