Good Morning, this is Capital Essence’s Market Outlook (the technical analysis of financial markets) for Wednesday May 5, 2021.

We’ve noted in the previous Market Outlook that: “the fact that the S&P is overbought as it tested key price level that had been successful in repelling price action in the past suggested that upside gains could be limited.  As for strategy, traders should consider reduce exposure into short-term market bounces or at least buying downside protection on winning positions.”  As anticipated, S&P fell on Tuesday, down 0.7 percent to 4,164.66 after dropping 1.5 percent at its low, amid selling in Big Tech and other high-growth stocks, erasing the benchmark’s strong start to the month.  The Nasdaq Composite down 1.9 percent to 13,633.50. The Dow Jones Industrial Average outperformed, up 0.1 percent to 34,133.03, thanks to strong performance in Dow Inc and Caterpillar.  The CBOE Volatility Index (VIX), widely considered the best gauge of fear in the market, jumped more than 619.48 percent to 18.31.

Chipmakers were under selling pressure with Nvidia and Intel losing 3.3 percent and 0.6 percent, respectively.  As such, the iShares PHLX Semiconductor ETF (SOXX) fell 1.69 percent on the day but is up more than 8 percent YTD, underperformed the S&P.  Now the question is what’s next?  Below is an update look at a trade in SOXX.

Our “U.S. Market Trading Map” painted SOXX bars in red (sell) – see area ‘A’ in the chart.  Over the past weeks SOXX has been trending lower in a short-term corrective mode after the later March rally ran out of steam just above the 161.8% Fibonacci extension.  That level was tested several times over the past months.  This week’s selloff pushed the ETF below the 2020 rising trend line, signify a bearish breakout and downside reversal.  A close below 414 on a weekly closing basis will confirm this and a retest of the 1-year moving average, currently at 350, should be expected.

SOXX has resistance around 450.  Short-term traders could use that level as the logical level to measure risk against. 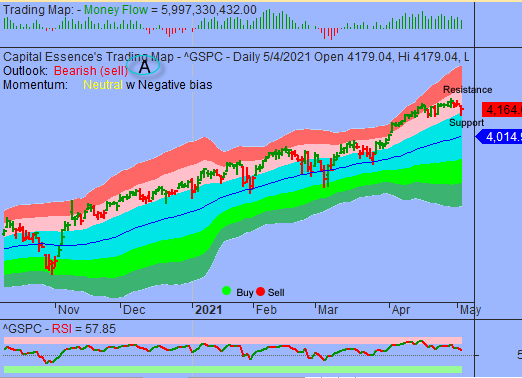 As expected, S&P moved down to test support at the lower boundary of the pink band after falling below the important sentiment 4200 mark last week.  In accordance to the Japanese candlestick pattern recognition, Tuesday’s bullish long tail candlestick is a clear indication of demand overwhelming supply.  If the textbook stands true then the S&P is at or very close to key turning point.  Market internal has been weakened but downside momentum does not appeared strong enough to generate widespread breakout. Additionally, Money Flow measure is above the zero line, indicating a positive net demand for stocks.  These elements increased the probability for at least an attempt to rally in the coming days.

For now, 4160 is the line in the sand.  A failure to hold above it indicated that long-term buying pressure has been exhausted and a much deeper pullback should be expected and we’re looking at 4000, based on the trend channel moving average.

On the upside, S&P has 4200 to trade against.  We’d turn particular bullish if the index closes twice above that level.

In summary, the bullish reversal doji candlestick pattern in the S&P together with the solid technical backdrop suggested strongly that the market is at or very close to a near-term low.  So it wouldn’t surprise us to see at least an attempt to rally over the next couple of days.