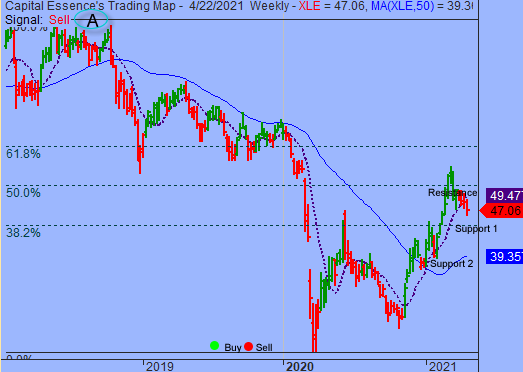 We’ve noted in the previous Market Outlook that: “over the next few days, trader should monitor trading behavior as the important sentiment 4200 zone is tested as resistance.  Some aggressive traders might use this level like a magnet to sell.”  As anticipated, S&P erased earlier gains and closed 0.9 percent lower at 4,134.98 on reports President Biden is considering a major capital gains tax hike on the rich.  The Dow Jones Industrial Average dropped 1 percent to 33,815.90 while the Nasdaq Composite slid 0.9 percent to 13,818.41.  The CBOE Volatility Index (VIX), widely considered the best gauge of fear in the market, jumped nearly 8 percent to 18.85.

Energy stocks were sluggish despite oil prices recovering some losses as hopes for a recovery in demand remain fragile amid rising global infections.  As such, the Energy Select Sector SPDR Fund (XLE) fell 1.17 percent on the day but is up more than 22 percent YTD, outperformed the S&P.  Now the question is what’s next?  Below is an update look at a trade in XLE. 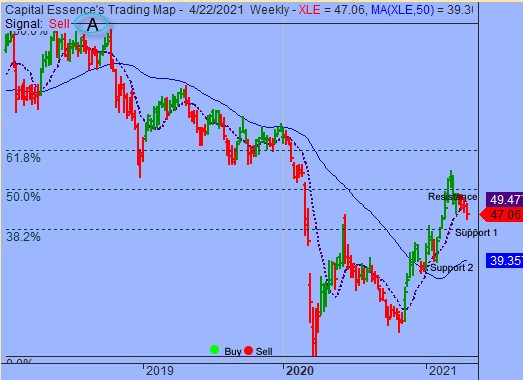 Our “U.S. Market Trading Map” painted XLE bars in red (sell) – see area ‘A’ in the chart.  Over the past few weeks, XLE has been trending lower in a short-term corrective mode after the February rally ran out of steam just above the 50% Fibonacci retracement. Last week’s selloff pushed the ETF below the late 2020 rising trend line, signify a bearish breakout and downside reversal.  This week’s follow-through confirmed last week’s bearish signal and setting the stage for a test of the 45 zone, or the 38.2% Fibonacci retracement.  A failure to hold above that level will bring the 40 zone into view.

XLE has resistance around 51.  Short-term traders could use that level as the logical level to measure risk against. 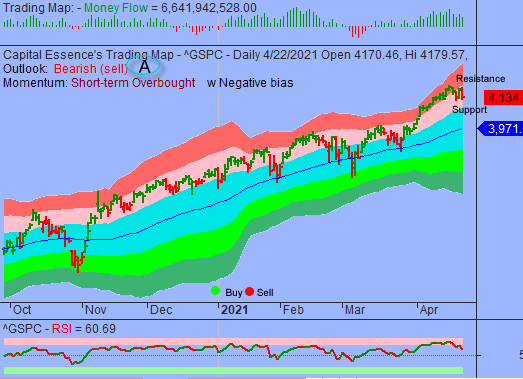 Once again, S&P retreated after recent rally attempt failed near the lower boundary of the red band.  In theory, the longer the index holds below this resistance the stronger it becomes. Adding to concerns is the Money Flow measure which printed a lower high as prices breakout to new high in early April.  This is an intermediate-term bearish development.  Right now, the most important thing to watch is trading behavior near 4100.  We’d turn particular bearish if the index close twice below that level.  A break below 4100 has a measured move to around 4000, which we’ve determined using the trend channel moving average.

In summary, S&P rally attempt failed at formidable resistance.  If the index fails to hold above 4100 this week, then the next stop will be 4000 with the possibility of a brief breakdown below that level.