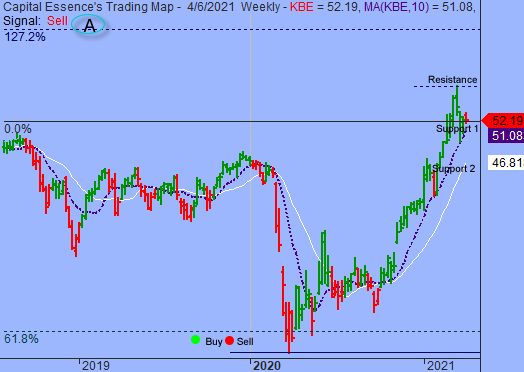 We’ve noted in the previous Market Outlook that: “S&P developed a high volatility with fast up and down moves near the red band.  While market seems vulnerable to some downside retracement over the short-term, we’re long-term positive for S&P as we believe selloff would be shallow and quick.”  As anticipated, S&P snapped a three-day win streak Tuesday, fell 0.1 percent to 4,073.94, as the recent rally driven by signs of strong economic rebound took a pause.  The Dow Jones Industrial Average dipped 96.95 points, or 0.3 percent to 33,430.24.  The tech-heavy Nasdaq Composite gave up 0.1 percent to 13,698.38.  The CBOE Volatility Index (VIX), widely considered the best gauge of fear in the market, rose 1 percent to 18.12.

Financials got hit as U.S. bond yields fell. The U.S. 10-year slipped below 1.7 percent quote yields after trading in range of 1.67 percent to 1.72 percent in recent days.  State Street (STT), Bank of New York Mellon (BK), PNC Financial Services Group Inc (PNC) were lower, with just a week to go until the major Wall Street banks kick off the first quarter earnings season in earnest.  As such, the SPDR S&P Bank ETF (KBE) fell 0.36 percent on the day but is up about 25 percent YTD, outperformed the S&P.  Now the question is what’s next?  Below is an update look at a trade in KBE. 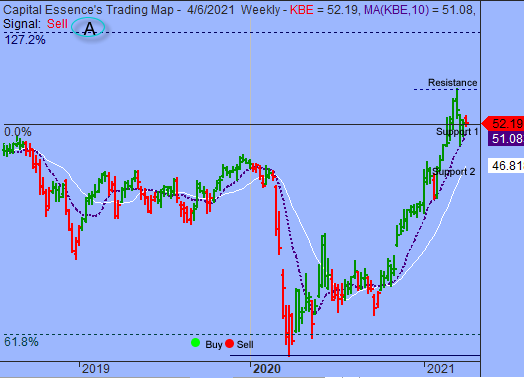 Our “U.S. Market Trading Map” painted KBE bars in red (sell) – see area ‘A’ in the chart. Over the past few weeks, KBE has been trending lower in a short-term corrective mode after the February rally ran out of steam near 56.  The March correction is testing support at the late 2020 rising trend line.  The overall technical backdrop deteriorated following recent selloff, suggested that the support might not hold for long. Right now the most important thing to watch is trading behaviors as the 51 zone is tested as support.  A close below that level on a weekly closing basis signifies a bearish breakout and downside reversal.

KBE has resistance near 56.  Short-term traders could use that level as the logical level to measure risk against. 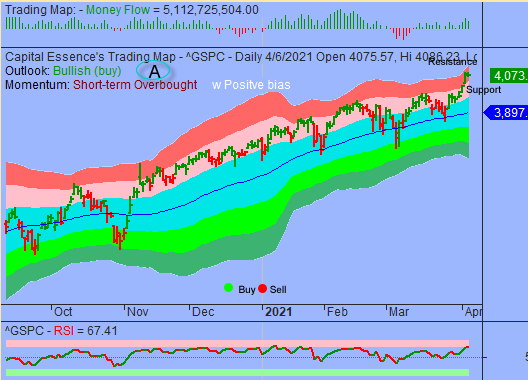 S&P retreated after recent test of resistance at the upper boundary of the red band, or extreme overbought zone, was met with a new wave of selling interest.  Technically speaking, Tuesday’s narrow range (or neutral) bar indicates uncertainty – traders refuse to press hard one way or the other just because they’re not very sure (or don’t know) about the near-term direction. And this explains why market often uses neutral bar to change direction. Although a single bar doesn’t form a trend so this is not a call for a top, rather it’s a warning signal, a sign in which the market is telling us that it’s ready for a pause. Right now the most important thing to look for is a test of support at 4020. A close below that level signals a medium-term correction with target of 3950, or the lower boundary of the pink band.

In a longer term, the overall trend and the Money Flow measure continue favor the bulls so we believe that any dips are a buying opportunities rather than time to take profits and get out.

In summary, with prices stretching out to new highs, temptation to take some money off the table is on a rise amid a growing sense that stocks might be running ahead of fundamentals. However, as last week’s trading action suggested, nobody wants to do too much too soon. So, while sitting on the overcrowded bullish bandwagon, we’ll begin to watch for the next sell signal.