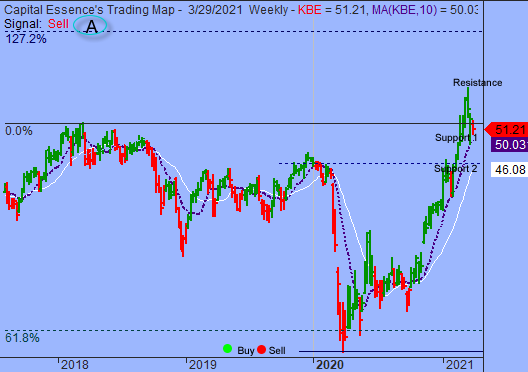 We’ve noted in the previous Market Outlook that: “Friday’s rally pushed the S&P above the lower boundary of the pink band, signify a bullish breakout and upside reversal.  Nevertheless, return of overbought conditions on an intraday basis might put a short-term cap on the upside.  As for strategy, buying into short-term dips remains the most profitable strategy.”  As anticipated, the S&P cut some losses Monday, but was kept in check by falling energy stocks on volatile oil prices after traffic resumed in the Suez Canal, while bank stocks slipped on fears of exposure following the reported liquidation of Archegos Capital.  For the day, the bench mark gauge fell 0.09 percent to 3,971 after falling as much as 0.8 percent earlier. The Nasdaq Composite slipped 0.6 percent to 13,059. The Dow Jones Industrial Average rose 0.30 percent to 33,171.77.  The CBOE Volatility Index (VIX), widely considered the best gauge of fear in the market, tumbled more than 5 percent to 20.05.

Chinese big tech and U.S. media remained under pressure after New York City-based Archegos Capital Management was reportedly forced to sell more than $20 billion worth of shares in margin call on Friday.  Nomura warned of a “significant” loss of up $2 billion, while Credit Suisse warned the loss could be “highly significant” on first-quarter results.  As such, the SPDR S&P Bank ETF (KBE) fell 2.59 percent on the day but is up more than 22 YTD, outperformed the S&P.  Now the question is what’s next?  Below is an update look at a trade in KBE. 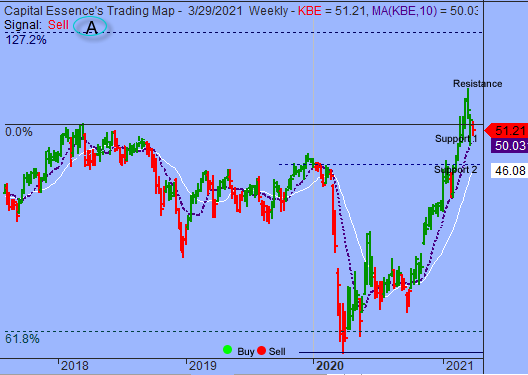 Our “U.S. Market Trading Map” painted KBE bars in red (sell) – see area ‘A’ in the chart.  Over the past few weeks, KBE has been trending lower in a short-term corrective mode after the February rally ran out of steam just above the prior high set in early 2018.  The March correction is testing support at the late 2020 rising trend line. This week’s bearish trading actions suggested that the support might not hold for long and KBE might have to move to a much lower level to attract new buyers.  A close below 50 on a weekly closing basis will confirm this and a test of the more important support near the 46 zone should be expected.

KBE has resistance near 55.  Short-term traders could use that level as the logical level to measure risk against. 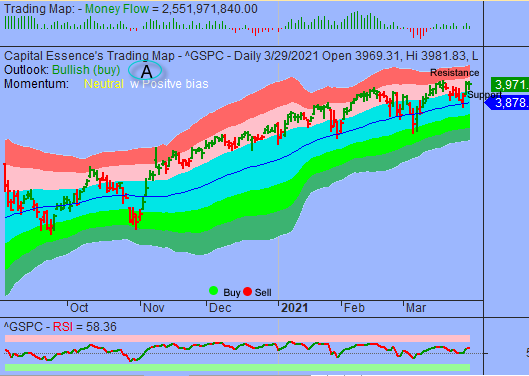 S&P is basing sideways using the lower boundary of the pink band as support after climbed above that level last week.  This is a positive development but let’s notice that with recent gains, the index is about 1 percent below the lower boundary of the red band, or extreme overbought zone.  As mentioned, the normal behavior for the S&P has been to consolidate and retreated almost every time it traded above that level, the way we had in January, February and mid-March, so there is a high probability that a significant consolidation pattern will again develop in the coming days.  Nonetheless, the overall technical backdrop continues favor the bulls so we believe that any dips are a buying opportunities rather than time to take profits and get out.

In summary, while overbought condition is likely keeping buyers at bay, the overall technical backdrop remains supportive of further advance.  As for strategy, pullback will present a buying opportunity, while selling into strength may not be the best strategy in a market considered likely to bounce back.