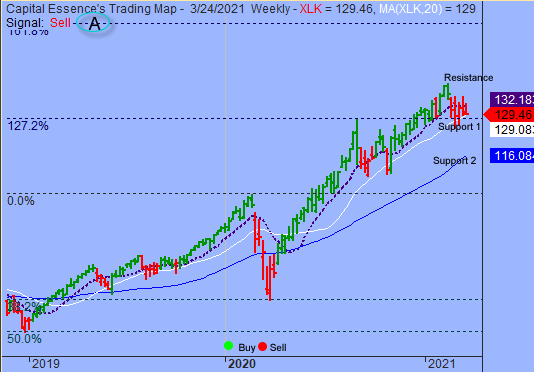 We’ve noted in the previous Market Outlook that: “the big picture remains the same. There is an orderly pullback consolidation, which represents digestion period.  However, the fact that buying pressure deteriorated as the S&P tested key price level suggested that most of the potential buyers at this level had already placed their bets.  The next batch of buyers typically sits at a much lower level.  With this in mind we’d look to reduce exposure into short-term intraday bounces.”  As anticipated, S&P reversed its intraday gains to close lower Wednesday, lost 0.55 percent to 3,889.14, as tech stocks failed to take advantage of falling bond yields, with analysts warning of further choppy trades ahead.  The Dow Jones Industrial Average fell 0.01 percent to 32,420.06.  The Nasdaq Composite dropped 2.01 percent to 12,961.89.  The CBOE Volatility Index (VIX), widely considered the best gauge of fear in the market, rose more than 4 percent to 21.20.

The so-called Fab 5 tech stocks including Google-parent Alphabet (GOOGL) were in the red. Apple (AAPL), Microsoft (MSFT), Amazon.com (AMZN), and Facebook (FB) ended lower.  As such, the Technology Select Sector SPDR Fund (XLK) dropped 1.21 percent on the day and is flat YTD, underperformed the S&P.  Now the question is what’s next?  Below is an update look at a trade in XLK. 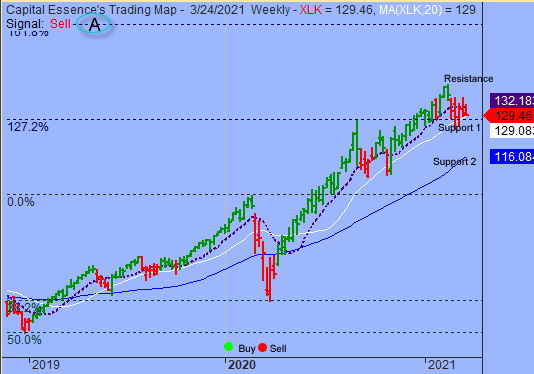 Our “U.S. Market Trading Map” painted XLK bars in red (sell) – see area ‘A’ in the chart.  The first dominant feature on the chart is the rising trend starting in early 2020.  The second dominant feature of the chart is the sideways trading range between the 135 and 125 since late February, which represents the digestion period. The overall technical backdrop deteriorated following recent selloff, suggesting that the support might not hold for long.  Over the next few days, traders should monitor the retreat and rebound behaviors as the 2020 rising trend line, currently at 129, is tested as support.  A close below that level on a weekly closing basis has measured move to 116, based on the 1-year moving average.

XLK has resistance near 135.  Short-term traders could use that level as the logical level to measure risk against. 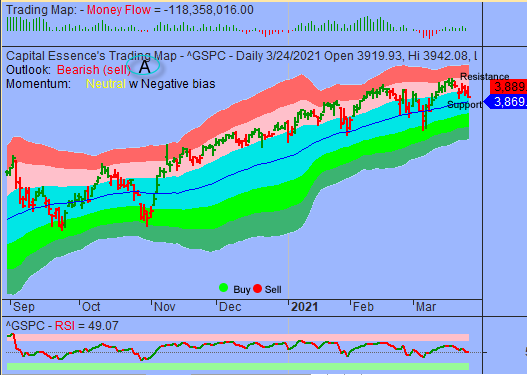 Key technical development in Wednesday session was a close below the important sentiment 3900 mark. Money Flow measure fell below the zero line, indicating a negative net demand for stocks.  Momentum indicator has been weakening but downward momentum does not appeared strong enough to generate a widespread breakdown.  The index could signal a downward trajectory, depending on how it closes over the next few days.  The trend channel moving average, around 3870, represents key support.  If it closes below that level, the next leg is likely lower, and we’re looking at 3750.

Last week’s bearish breakaway gap, around 3950, represents key resistance.  There is no reason to turn particular bullish until this level is eclipsed.

In summary, S&P will have a downward bias this week, pressured by short-term negative momentum but we expect support at the trend channel moving average to remain largely intact.  There is a high probability that market is in for a ‘range-bound’ trading environment.  This is a rally and retreat environment. It is not a trending environment. Short-term traders can anticipate continued volatility with rapid up and down moves in the markets.