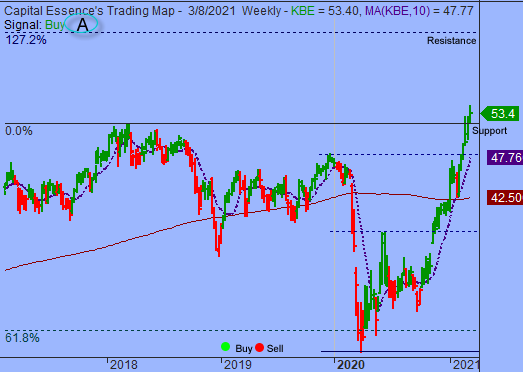 Technology stocks continued their recent weakness as the Nasdaq Composite dropped 2.4 percent to 12,609.16. The tech-heavy benchmark closed more than 10 percent below its February 12 closing high, falling into correction territory. The high-growth names have been pressured by rising interest rates lately. The U.S. 10-year Treasury yield stood around 1.6 percent on Monday.  The S&P lost 0.54 percent to 3,821.35.  The Dow Jones Industrial Average outperformed, rose 0.97 percent to 31,802.44.  The CBOE Volatility Index (VIX), widely considered the best gauge of fear in the market, rose more than 3 percent to 25.47.

Financial shares and restaurant and travel-related stocks that are expected to do well when the economy reopens attracted strong buying support.  Banks added about 2 percent as the yield on the benchmark 10-year note stood near a 13-month high.  As such, the SPDR S&P Bank ETF (KBE) jumped 2.30 percent on the day and is up nearly 28 percent YTD, outperformed the S&P.  Now the question is what’s next?  Below is an update look at a trade in KBE. 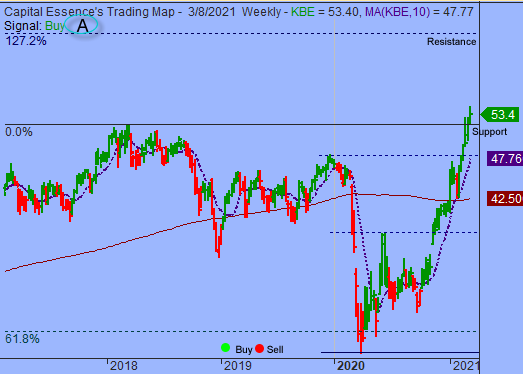 Our “U.S. Market Trading Map” painted KBE bars in green (buy) – see area ‘A’ in the chart. KBE has been on a tear in recent days after the January correction found support near the late 2020 rising trend line.  The early February rally pushed the ETF above the closely watch 52 zone or the prior high set in 2018.  This is a positive development signify a bullish breakout and upside reversal.  The overall technical backdrop remains supportive of the further advance.  This increases the probability for a rapid advance toward the next level of resistance near the 63 zone, or the 127.2% Fibonacci extension.

KBE has support near 52.  Short-term traders could use that level as the logical level to measure risk against. 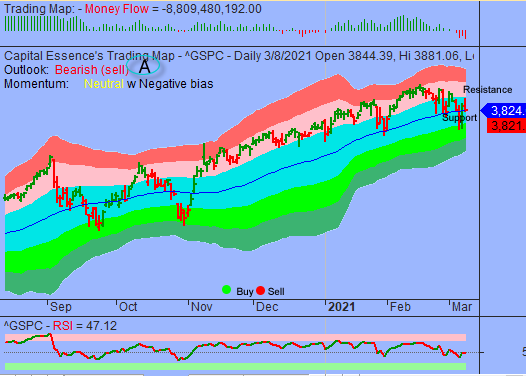 Once again, the S&P moved down to test support at the trend channel moving average after the early rally attempt ran into resistance near the important sentiment 3900 zone.  That level roughly corresponds with the lower boundary of the pink band.  That level was significant when the index fell below it in late February.  Technically speaking, the longer the index holds below this resistance the stronger it becomes.  Adding to concerns is Money Flow measure, which hovers below the zero line since market broke down last week, indicating a negative net demand for stocks.  Right now, the most important thing to watch is the retreat and rebound behavior as the trend channel moving average, just above the important sentiment 3800 zone, is tested as support.  A close below that level suggested that the next leg would be significantly lower and we’re looking at 3700.

On the upside, if the market is going to find bottom in the near term, we want to see the S&P establishes some trading ranges and closes above 3900.  Staying below that level heralds more losses.

In summary, S&P moved down to test support at the trend channel moving average after the early rally attempt failed near formidable resistance.  If the S&P fails to hold above that level this week than the next stop will be 3700 with the possibility of a brief breakdown below that level.