We’ve noted in the previous Market Outlook that: “the big picture remains the same.  There’s an orderly high-level consolidation period near S&P’s 3900, which represented the digestion period in the aftermath of the late January rally.  Market internals remains positive and downside momentum does not appear strong enough to generate widespread breakouts.  As for strategy, buying into short-term dips remains the most profitable strategy.”  As anticipated, S&P eked out modest gains on Thursday, up 0.2 percent to 3,916.38, with investors betting on more fiscal stimulus, but U.S. President Joe Biden said China was poised to “eat our lunch,” a warning that tempered enthusiasm for a market near record highs.  The Nasdaq Composite added 0.4 percent to 14,025.77.  The Dow Jones Industrial Average closed near the unchanged mark at 31,430.70.  The CBOE Volatility Index (VIX), widely considered the best gauge of fear in the market, fell more than 3 percent to 21.25.

Nvidia (NVDA) Corp rose 3.2 percent and Intel Corp (INTC) gained 3.1 percent, making technology the leading sector to gain on the S&P and Nasdaq.  As such, the iShares PHLX Semiconductor ETF (SOXX) jumped 3.46 percent on the day and is up about 17 percent YTD, outperformed the S&P.  Now the question is what’s next?  Below is an update look at a trade in SOXX.

SOXX has support near 395.  Short-term traders could use that level as the logical level to measure risk against. 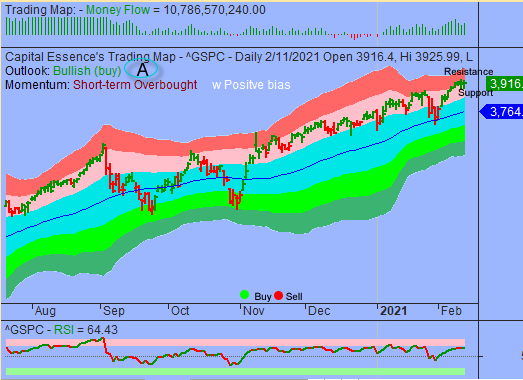 S&P continues basing sideways using the 3900 zone as support.  That level roughly corresponds with the lower boundary of the red band, or extreme overbought zone.  As mentioned, the normal behavior for the S&P has been to consolidate and retreated almost every time it traded above that level so there is a high probability that a significant consolidation pattern will again develop in this area.  While seemingly vulnerable to some short-term setback the overall technical backdrop remains positive so pullback should be short-lived.

For now, 3900 is the line in the sand. Unless there is a close below that level, the path with least resistance is to the upside.

In summary, trading behavior in the S&P constrained by a short-term sideways pattern and shown little evidence of a sustainable change in trend.  While seemingly vulnerable to some short-term setback the overall technical backdrop remains positive so pullback should be short-lived.