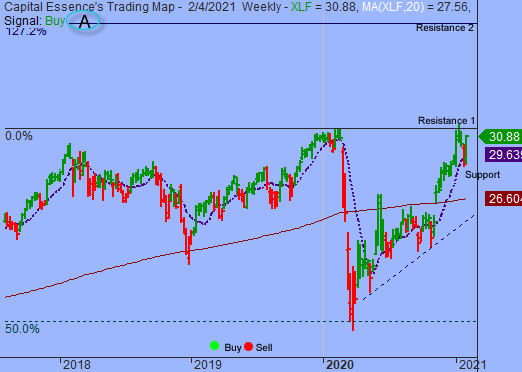 Stocks closed higher Thursday as tech and cyclical stocks racked up gains like banks as investors bet on the economy charting a faster recovery amid an improving backdrop.  The Dow Jones Industrial Average rose 1.1 percent to 31,055.86. The S&P climbed 1.1 percent to 3,871.74. The Nasdaq Composite jumped 1.2 percent to 13,777.74.  The CBOE Volatility Index (VIX), widely considered the best gauge of fear in the market, fell 5 percent to 21.77.

The signs of an improving economy coupled with expectations for speedier vaccine rollout in the months ahead have pushed U.S. Treasury yields higher, widening the 5-to-30 year treasury curve – a gauge on the health of the economy – by the most since March 2016.  JPMorgan Chase & Co (JPM), Bank of America Corp (BAC) and Wells Fargo & Company (WFC) were up more than 2 percent.   As such, the Financial Select Sector SPDR Fund (XLF) rose 2.22 percent on the day and is up about 53 percent YTD, outperformed the S&P.  Now the question is what’s next?  Below is an update look at a trade in XLK. 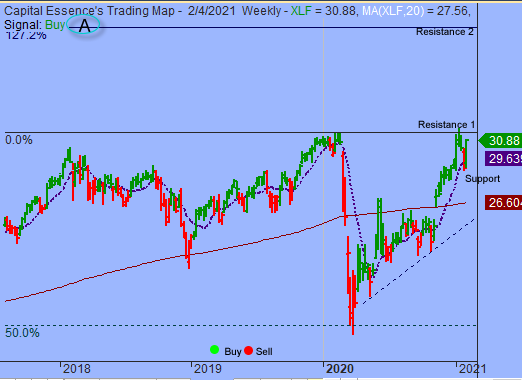 Our “U.S. Market Trading Map” painted XLF bars in green (buy) – see area ‘A’ in the chart.  Over the past few weeks, XLF has been trending lower in a short-term corrective mode after the November rally ran out of steam near the prior high set in early 2020.  The correction tested and respected support at the 2020 rising trend line. This week’s bullish reversal suggested that XLF will climb to new high as soon as it works off excessive optimism.  Right now the most important thing to watch is trading behaviors as the 31.50 zone is tested as resistance.  A close above that level on a weekly closing basis signifies a bullish breakout and trigger acceleration toward the 38 zone, or the early 127.2% Fibonacci extension.

XLF has support just above 29.  Short-term traders could use that level as the logical level to measure risk against. 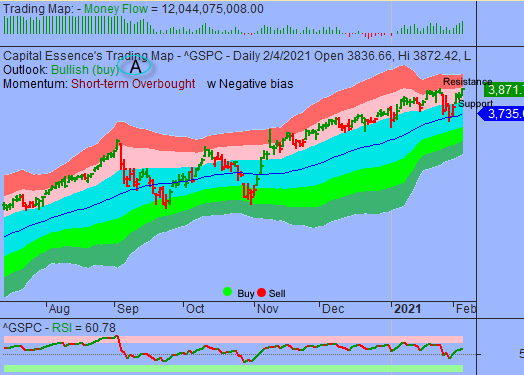 S&P moved up to test resistance at the lower boundary of the red band, or extreme overbought zone, after recent pullback found support near the trend channel moving average.  Money Flow measure climbed above the zero line, indicating a positive net demand for stocks.  Momentum has been strengthened but the return of overbought conditions on an intraday basis will put a cap on the upside.  With this in mind, we’d look to reduce exposure into overbought strength, which might take the S&P closer to 3900 before a significant pullback unfolds.

In summary, S&P moved up to test resistance at the lower boundary of the red band after recent pullback found support near the trend channel moving average.  Overbought conditions have returned on an intraday basis but momentum remains supportive so downside risk could be limited. It is possible that S&P could continue to drift higher as trading sentiment remains strong.  With this in mind, we’d look to reduce exposure into overbought strength, which might take the S&P closer to 3900 before a significant pullback unfolds.