We’ve noted in the previous Market Outlook that: “S&P shifted to range bound trading pattern as traders wonder whether more gain is warranted given the massive advance over the past months.”  As anticipated, S&P fell slightly on Friday, retreating from record levels weighed down by energy stocks on falling oil prices and a slump in Intel and IBM on quarterly results that failed to impress investors.  For the day, the broad market gauge dipped 0.3 percent to 3,841.47.  The Dow Jones Industrial Average slid 0.6 percent to 30,996.98.  The Nasdaq Composite rose 0.1 percent to 13,543.06, supported by Big Tech.  The CBOE Volatility Index (VIX), widely considered the best gauge of fear in the market, rose nearly 3 percent to 21.91.

Semi underperformed after Intel (INTC) reporting fiscal first-quarter results that topped consensus estimates, but the results were driven by strong gains in its lower-margin PC-centric business. Shares fell 9 percent.  As such, the iShares PHLX Semiconductor ETF (SOXX) dropped 1.70 percent on the day but is up more than 10 percent YTD, outperformed the S&P.  Now the question is what’s next?  Below is an update look at a trade in SOXX.

Our “U.S. Market Trading Map” painted SOXX bars in green (buy) – see area ‘A’ in the chart.  XHB has been on a tear in recent months after breakout above the 127.2% Fibonacci extension in early November.  The January rally pushed the ETF up against the 161.8% Fibonacci extension.  That level is significant in charting terms. The overall technical backdrop remains supportive of further advance.  So it seems to us that will break to new high as soon as it works off excessive optimism.  A close above 420 on a weekly closing basis will confirm this and trigger acceleration toward the 660 zone, or the 261.8% Fibonacci extension.

SOXX has support near 380.  Short-term traders could use that level as the logical level to measure risk against. 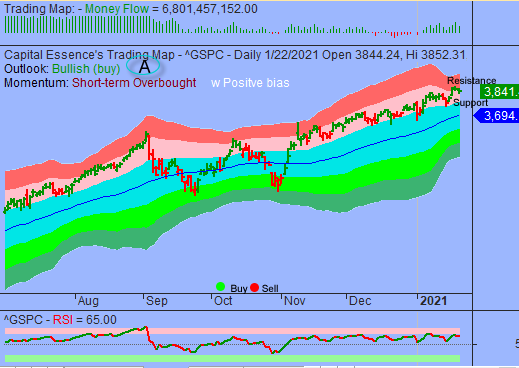 S&P moved down to test support at Wednesday’s bullish breakout point after recent test of resistance at the lower boundary of the red band was met with a wave of selling interest.  Market internal remains supportive of further advance but upside momentum does not appeared strong enough to generate widespread breakout.  Over the next few days, traders should monitor the rally and retreat behaviors as the lower boundary of the red band, currently at 3860, is tested as resistance.  A sustain advance above that level will bring 3900 into view.

For now, S&P has the lower boundary of the red band, currently at 3860, to trade against.  The normal behavior for the S&P has been to consolidate and retreated almost every time it traded above that level so there is a high probability that a significant consolidation pattern will again develop in this area.

On the downside, support is strong between 3835 and 3800.  Expect the index to draw in buyers in any pullback toward this zone.

In summary, there’s an orderly high-level consolidation period near the lower boundary of the red band.  The overall technical backdrop remains supportive of further advance, suggesting that S&P will breakout to new high as soon as it works off excessive optimism.