We’ve noted in the previous Market Outlook that: “there’s an orderly high-level consolidation period near the important sentiment 3800 mark.  The overall technical backdrop remains supportive of further advance, suggesting that S&P will breakout to new high as soon as it works off excessive optimism.”  As anticipated, S&P closed slightly higher on Wednesday, led by tech shares, as political turmoil on Capitol Hill gripped investor attention ahead of the vote in the House to impeach President Donald Trump for an historic second time.

Technology stocks kept the broader market above the flatline.  Intel Corporation (INTC) rallied 7 percent to boost tech after the chipmaker confirmed Chief Executive Bob Swan would step down next month following pressure from activist investor Third Point (TPRE).  As such, iShares PHLX Semiconductor ETF (SOXX) rose 0.16 percent on the day and is up 7 percent YTD, outperformed the S&P.  Now the question is what’s next?  Below is an update look at a trade in SOXX.

Our “U.S. Market Trading Map” painted SOXX bars in green (buy) – see area ‘A’ in the chart.  SOXX has been on a tear in recent days after breaking above the December high in early January.  This week’s upside follow-through confirmed last week’s bullish signal, increased the probability for a test of the 420 zone, or the 161.8% Fibonacci extension. The overall technical backdrop remains supportive of further advance.  A close above 420 on a weekly closing basis will trigger acceleration toward the 660 zone, or the 261.8% Fibonacci extension.

SOXX has support near 380.  Short-term traders could use that level as the logical level to measure risk against. 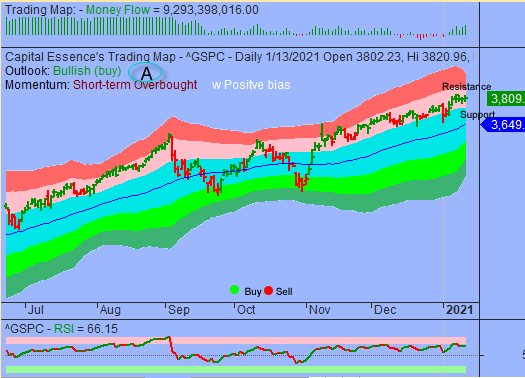 Not much has been changed since last update.  The S&P continues basing sideways near the important sentiment 3800 zone.  Market is short-term overbought following recent advance but Money Flow measure is above the zero line, indicating a positive net demand for stocks.  This certainly would argue that the path with least resistance remains to the upside.

Over the next few days, traders should monitor the rally and retreat behaviors as last week’s high, around 3826, is tested as resistance.  A sustain advance above that level will the lower boundary of the red band, just below 3870, into view.

In summary, the big picture remains the same.  There’s an orderly high-level consolidation period near S&P’s 3800, which represented the digestion period in the aftermath of the early January rally.  Market internals remains positive and downside momentum does not appear strong enough to generate widespread breakouts.  As for strategy, buying into short-term dips remains the most profitable strategy.