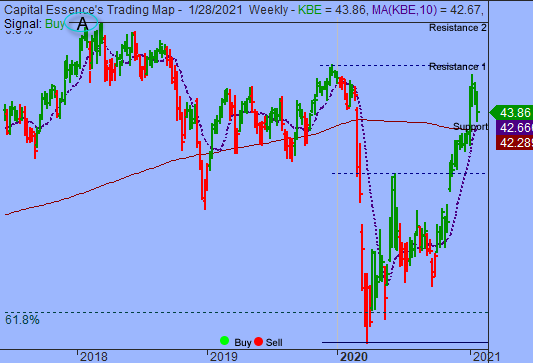 We’ve noted in the previous Market Outlook that: “an overbought pullback consolidation interrupted the multi-month rally in the S&P.  Although seemingly vulnerable to further short-term weakness, the overall technical backdrop remains positive so expect S&P to attract buyers in any pullback toward the 3700 zone.”  As anticipated, stocks jumped on Thursday, driven by mostly bullish quarterly earnings and a rise in cyclicals on expectations the economy is set to rebound strongly.  For the day, the S&P rose 0.98 percent, the Dow Jones Industrial Average gained 0.99 percent and the Nasdaq Composite closed up 0.50 percent.  The CBOE Volatility Index (VIX), widely considered the best gauge of fear in the market, tumbled nearly 19 percent to 30.21.

Cyclical stocks – those that tend to move in tandem with the economy – were among the biggest gainers with financials, led by regional banks and payment company on bets the economy will likely rebound in the months ahead following the biggest largest annual contraction since 1946.  American Express (AXP) and Capital One Financial (COF) were up more than 4 percent, while Citizens Financial (CFG) was up nearly 6 percent.  As such, the SPDR S&P Bank ETF (KBE) rose 1.74 percent on the day and is up about 5 percent YTD, outperformed the S&P.  Now the question is what’s next?  Below is an update look at a trade in KBE.

Our “U.S. Market Trading Map” painted KBE bars in green (buy) – see area ‘A’ in the chart.  Over the past few weeks, KBE has been trending lower in a short-term corrective mode after the October rally ran out of steam near the late 2019 high, around 48.  The correction is testing support at the 42.50 zone, or the 4-year moving average and the late 2020 rising trend line.  The overall technical backdrop remains positive, suggesting that KBE will move higher as soon as it works off excessive optimism.  Support is strong around the 42.50 zone.  If KBE could hold above that level then a climb above 48 would be easier to achieve.  A sustain above 48 signifies a bullish breakout and trigger acceleration toward the 2018 high, around 52.

KBE has support around 42.50.  Short-term traders could use that level as the logical level to measure risk against. 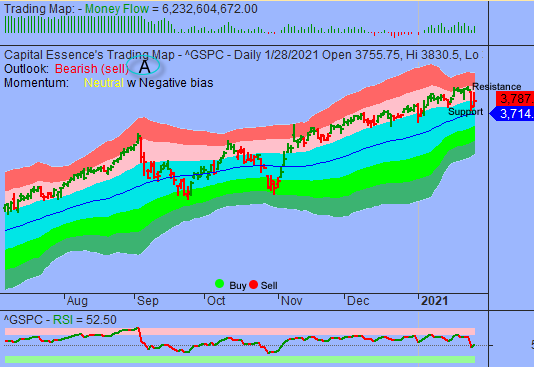 As expected, S&P rebounded nicely after recent selloff found support near the trend channel moving average.  Thursday’s recovery rally tested resistance at the lower boundary of the pink band, just below the important sentiment 3800 mark.  That level was significant when the index fell below it on Wednesday.  It’s now acting as strong resistance.  Momentum has been strengthened but does not appear strong enough to generate widespread breakouts.  While more backing and filling would not be a surprise, a close above the lower boundary of the pink band it is required to neglect the medium-term downward trend pressure.  There is a no reason to turn particularly bullish until this area is eclipsed.

In summary, Thursday’s recovery rally is testing ‘support turned resistance’ near S&P’s 3800.  The short-term technical backdrop remains bearish.  The longer the index stays below that level, the more vulnerable it is to lower prices.