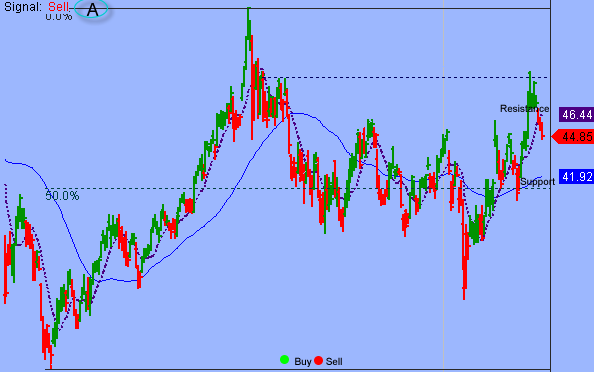 Stocks closed higher after a shortened session on Christmas eve, with tech stocks gaining as the long-awaited stimulus is delayed. The Dow Jones Industrial Average climbed 0.2 percent to 30,199.87, while the S&P gained 0.4 percent to 3,703.06. The Nasdaq Composite rose 0.3 percent to 12,804.73.  The CBOE Volatility Index (VIX), widely considered the best gauge of fear in the market, fell more than 7 percent to 21.53.

Shares of Alibaba (BABA) slumped 13 percent after China said it is investigating the company for anticompetitive practices. Shares are down 30 percent since hitting all-time high in October. Alibaba, built by billionaire Jack Ma, said it will cooperate with regulators.  As such, the iShares China Large-Cap ETF (FXI) fell 1.67 percent on the day but is up about 3 percent YTD, underperformed the S&P.  Now the question is what’s next?  Below is an update look at a trade in FXI. 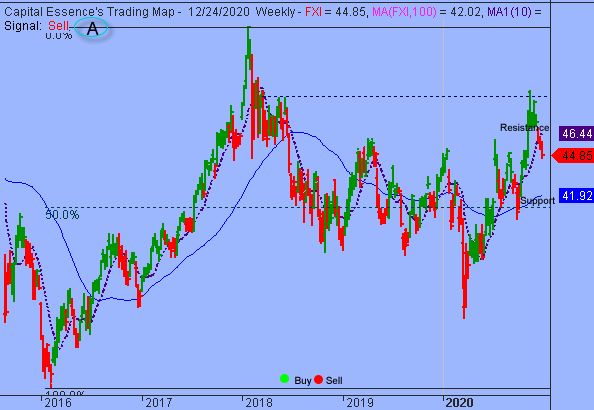 Our “U.S. Market Trading Map” painted FXI bars in red (sell) – see area ‘A’ in the chart. Over the past few weeks, FXI has been trending lower in a short-term corrective mode after the October rally ran out of steam near the spring 2018 recovery high.  The early December selloff pushed the ETF below the 2020 rising trend line, signify a bearish breakout and downside reversal. The overall technical backdrop remains negative, increased the probability for a retest of support near the 41-42 zone, or the 1-year moving average and the 50% Fibonacci retracement.

The 2020 rising trend line, round 46.50, represents the logical level to measure risk against.  All bets are off should FXI close above that level. 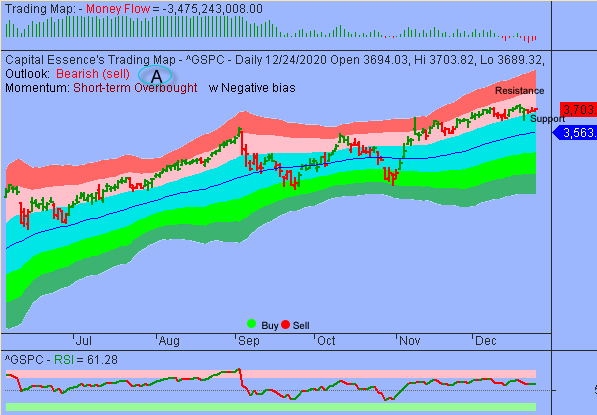 Not much has changed since last update.  S&P continues basing sideways using the lower boundary of the pink band as support.  That level was tested several times over the past months.  Technically speaking, the more often support is tested the weaker it becomes.  Money Flow measure flashed a weak bearish signal as it trended higher from below the zero line, indicating selling pressure had eased.  Market internal has somewhat improved but upside momentum does not appeared strong enough to generate widespread breakout.

For now, the lower boundary of the pink band, around 3680, is the line in the sand.  A failure to hold above it indicated that long-term buying pressure has been exhausted and a much deeper pullback should be expected and we’re looking at 3560, based on the trend channel moving average.

The December high, around 3725, acted as strong resistance.  A close above it is required to neglect the short-term sideways trading pattern.  With that said, there is no reason to turn particularly bullish until this area is eclipsed.

In summary, the big picture remains the same.  There’s an orderly high-level consolidation period near the lower boundary of the pink band, around S&P’s 3680, which represented the digestion period in the aftermath of the late October rally.  Market internal has somewhat improved but upside momentum does not appeared strong enough to generate widespread breakout. So it should not be surprising to see further backing and fillings in the coming days.