We’ve noted in the previous Market Outlook that: “market is short-term overbought following recent advance. There could be a sell-off in the offing but it would be shallow if so.”  As anticipated, fell on Wednesday, retreating from the record highs set earlier in the day, as tech shares struggled and traders weighed the prospects of new fiscal stimulus.  The S&P fell 0.8 percent to 3,672.82. The Nasdaq Composite pulled back by 1.9 percent to 12,338.95.  The Dow Jones Industrial Average gave up 0.35 percent to 30,068.81.  The CBOE Volatility Index (VIX), widely considered the best gauge of fear in the market, jumped nearly 8 percent to 22.27.

NXP Semiconductor and Qorvo fell more than 5 percent each and were among the worst-performing chip stocks on Wednesday.  As such, the iShares PHLX Semiconductor ETF (SOXX) tumbled 2.82 percent on the day but is up more than 48 percent YTD, outperformed the S&P.  Now the question is what’s next?  Below is an update look at a trade in SOXX.

Our “U.S. Market Trading Map” painted SOXX bars in green (buy) – see area ‘A’ in the chart.  SOXX has been on a tear in recent months after the mid-October correction found support near the 2020 rising trend line.  The early November rally tested resistance at the important sentiment 400 zone.  Wednesday’s massive selloff suggested that the resistance would hold.  The overall technical backdrop remains positive, supporting further advance.  With this in mind, we’d look to increase exposure into any pullback toward the 350 zone.  There is a minor resistance near 400.  A close above that level would resume the multi-month upswing with upside target around 420, or the 161.8% Fibonacci extension.

The 127.2% Fibonacci extension, around 340, represents the logical level to measure risk against.  All bets are off should SOXX close below that level. 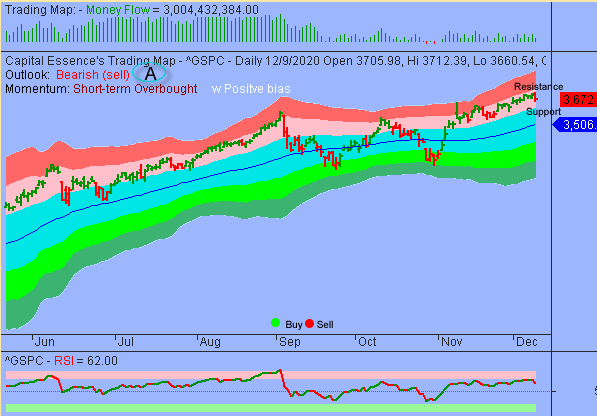 S&P sold off sharply after the early rally attempt ran out of steam near the lower boundary of the red band, just above the important sentiment 3700 mark.  That level was significant when the index climbed above it earlier this week.  Technically speaking, the longer the index holds below this resistance the stronger it becomes.  Adding to concerns is Money Flow measure, which hover near the zero line as prices ascending, indicating less money are chasing stocks higher.  Momentum has been weakened but does not appear strong enough to generate a widespread breakdown.  Right now, the most important thing to watch is the retreat and rebound behavior near 3625.  A close below that level will bring the trend channel moving average, just above 3500, into view.

Short-term trading range: 3625 to 3735.  S&P has support near 3665-3625.  A failure to hold above 3600 indicated that long-term buying pressure has been exhausted and a much deeper pullback should be expected and we’re looking at 3500, based on the trend channel moving average.  Resistance is around 3735.  A sustain advance above that level has measured move to around 3850.

In summary, S&P rally attempt failed at formidable resistance.  If the index fails to hold above 3700 this week, then the next stop will be 3625 with the possibility of a brief breakdown below that level.