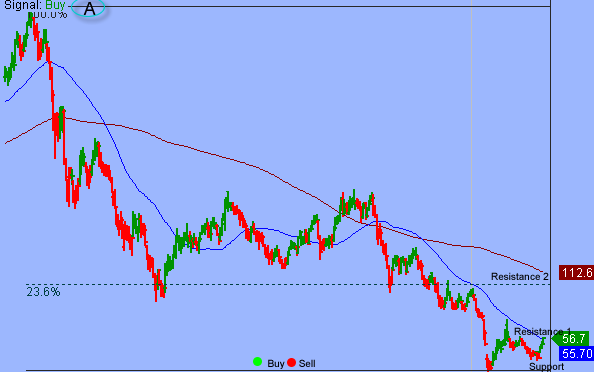 Stocks rose on Monday after AstraZeneca and the University of Oxford said their coronavirus vaccine was up to 90% effective, becoming the third inoculation this month that was revealed to be effective in trial data.  The market hit its session high in the final hour of trading amid a report suggesting President-elect Joe Biden plans to select former Federal Reserve Chair Janet Yellen as Treasury Secretary.  Biden will nominate Yellen as Treasury Secretary, The Wall Street Journal reported. During her tenure as Fed Chair, Yellen was viewed as pro-stimulus, and if nominated is widely expected to support fiscal-boosting measures to shore up the economy.

Energy surged on hopes a quicker end to the pandemic could shore up demand. Occidental Petroleum (OXY) led the gains in the sector, up 17 percent.  As such, the SPDR S&P Oil & Gas Exploration & Production ETF (XOP) jumped nearly 9 percent on the day but is down more than 40 percent YTD, underperformed the S&P.  Now the question is what’s next?  Below is an update look at a trade in XOP. 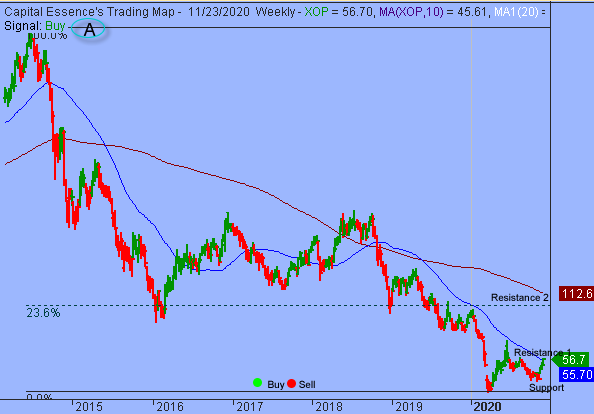 Our “U.S. Market Trading Map” painted XOP bars in green (buy) – see area ‘A’ in the chart.  XOP has been on a tear in recent weeks after the late August downswing found support near the March low.  This week’s rally is testing resistance at the one-year moving average, a key technical level based on moving averages.  That level was significant when XOP fell below it in late 2018.  A close above 56 on a weekly closing basis signify a bullish breakout and trigger acceleration toward the 110 zone, or the 23.6% Fibonacci retracement and the falling 4-year moving average.

The early October low, just above 38, represents the logical level to measure risk against.  All bets are off should XOP close below that level. 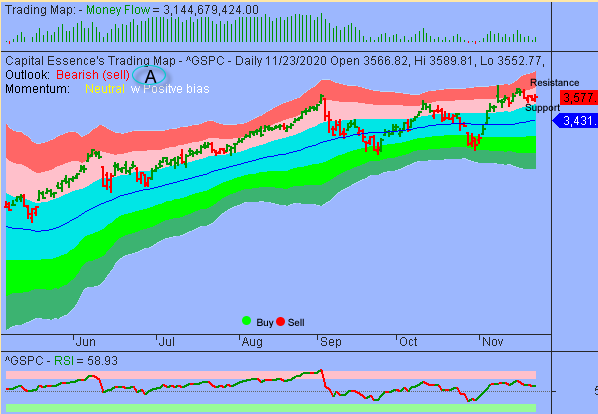 The big picture remains the same.  S&P continues basing sideways using the early November breakout point as support.  Market internal has been strengthened following but upside momentum does not appeared strong enough to generate widespread breakout.  Over the next few days, traders should monitor trading behavior as the 3580 zone is tested as resistance.  That level was significant in charting terms.  A sustain advance above that level will bring the November high into view.

On the downside, early November breakout point, around 3550, represents key support. A failure to hold above that level will turn the short-term trend down and a retest of the trend channel moving average, just above 3400, should be expected.

In summary, the big picture remains the same.  There’s an orderly high-level consolidation period near the early November breakout point as support.  Market internal has been strengthened following recent advance but upside momentum does not appeared strong enough to generate widespread breakout.  S&P has 3600 to trade against.  We’d turn particularly bullish if the index closes twice above that level.