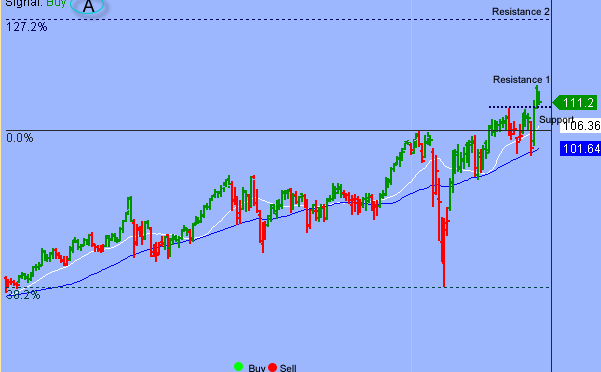 A sea of red pharma stocks kept the broader market lower after Amazon confirmed its entry into the pharma business with the launch of Amazon Pharmacy. Under the service, U.S. customers would be able to order prescription medications directly from Amazon.  Walgreens Boots Alliance (WBA) and CVS Health (CVS) plunged more than 8 percent.  As such, the Health Care Select Sector SPDR Fund (XLV) fell 0.65 percent on the day but is up more than 9 percent YTD, slightly underperformed the S&P.  Now the question is what’s next?  Below is an update look at a trade in XLV. 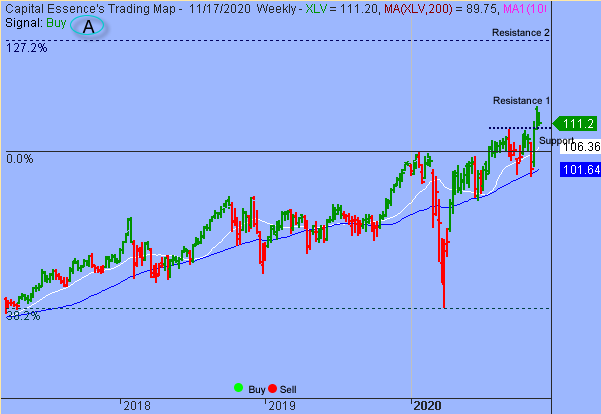 Our “U.S. Market Trading Map” painted XLV bars in green (buy) – see area ‘A’ in the chart.  XLV rebounded nicely after the mid-October pullback found support near the 1-year moving average, a key technical level based on moving averages.  The early November rally pushed the ETF above the prior high set in early September, signify a bullish breakout.  Right now the most important thing to watch is trading actions near the 110 zone. If XLV could hold above that level than a test of the 127.2% Fibonacci extension, just below 130, is easier to achieve.

A failure to hold above 110 on a weekly closing basis will turn the short-term trend down and a retest of the early 2020 high, around 105, should be expected.

For now, 105 represents the logical level to measure risk against.  All bets are off should XLV close below that level. 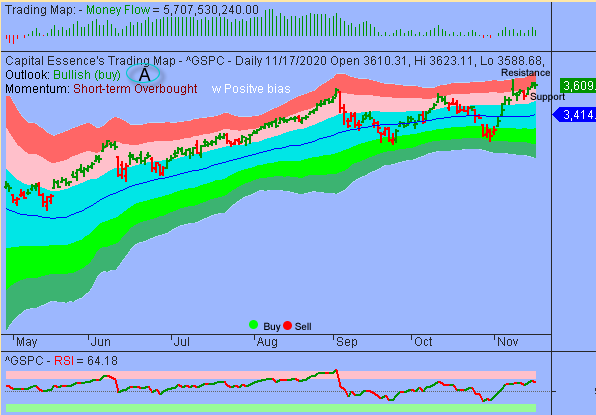 S&P’s basing sideway near the lower boundary of the red band after breaking out above the important sentiment 3600 mark on Monday. Market is overbought following recent advance but Money Flow measure is above the zero line, indicating a positive net demand for stocks.  This certainly would argue that the path with least resistance remains to the upside.

Over the next few days, the most important to watch is trading behavior near the lower boundary of the red band, or extreme overbought zone, around 3600.  As mentioned, the normal behavior for the S&P has been to consolidate and retreated almost every time it traded above that level so there is a high probability that a significant consolidation pattern will again develop in this area.

In summary, there’s an orderly high-level consolidation period near S&P’s 3600, which represented the digestion period in the aftermath of the late October rally.  Market internals remains positive and downside momentum does not appear strong enough to generate widespread breakouts.  As for strategy, buying into short-term dips remains the most profitable strategy.