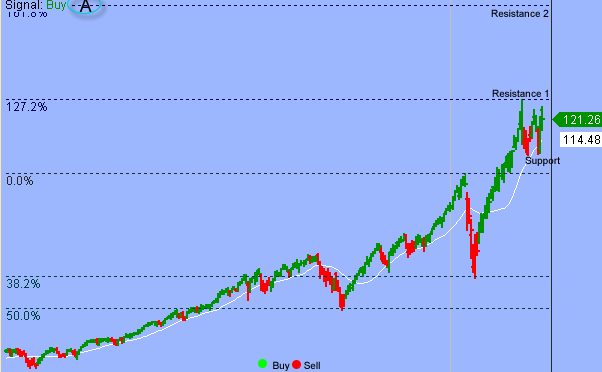 We’ve noted in the previous Market Outlook that: “while market is overbought as S&P moved down to test key price level, market internal remains supportive of further advance.  While some backing and filling would not be a surprise, the bulls will continue to have the benefit of the doubts as long as S&P holds above 3500.”  As anticipated, S&P closed higher Wednesday, up 0.8 percent to 3,572.66, as tech shares recovered some of their losses from earlier in the week at the expense of names who would benefit from an economic recovery.  The Nasdaq Composite jumped 2 percent to 11,786.43.  The Dow Jones Industrial Average fell 0.1 percent to 29,397.63.  The CBOE Volatility Index (VIX), widely considered the best gauge of fear in the market, fell more than 5 percent to 23.79.

Tech and consumer discretionary, the worst-performing sectors this week, outperformed on Wednesday. Tech was up by more than 2 percent, and consumer discretionary gained 1.5 percent.  As such, the Technology Select Sector SPDR Fund (XLK) rose 2.37 percent on the day and is up more than 32 percent YTD, outperformed the S&P.  Now the question is what’s next?  Below is an update look at a trade in XLK. 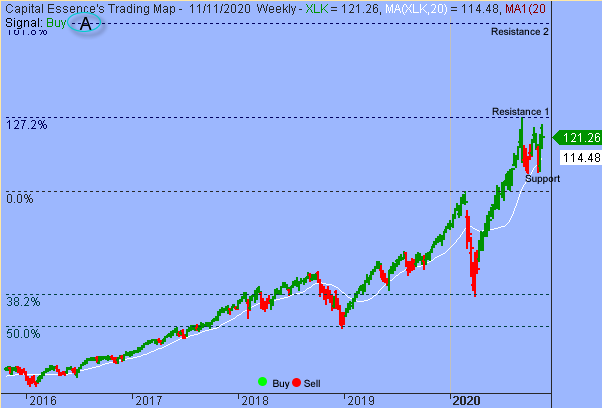 Our “U.S. Market Trading Map” painted XLK bars in green (buy) – see area ‘A’ in the chart.  The first dominant feature on the chart is the rising trend starting in early 2020.  The second dominant feature of the chart is the sideways trading range between 128 and 110 since early September, which represents the digestion period.  This week’s rally pushed the ETF up against the closely watch 128 zone, or the 127.2% Fibonacci extension. The overall technical backdrop remains positive, suggesting that the path with least resistance remains higher. Right now the most important thing to watch is trading behaviors as the 128 zine is tested as resistance.  A close above that level on a weekly closing basis signify a bullish breakout and trigger acceleration toward the 161.8% Fibonacci extension, just below 160.

The late September low, around 110, represents the logical level to measure risk against.  All bets are off should XLK close below that level. 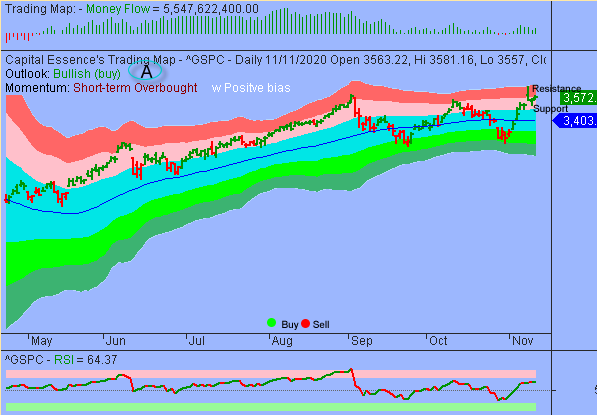 S&P continues basing sideway near the lower boundary of the red band after breaking out above the important sentiment 3600 mark on Monday. Market is overbought following recent advance but Money Flow measure is above the zero line, indicating a positive net demand for stocks.  This certainly would argue that the path with least resistance remains to the upside.

Over the next few days, the most important to watch is trading behavior near the lower boundary of the red band, or extreme overbought zone, around 3600.  Technically speaking, the normal behavior for the S&P has been to consolidate and retreated almost every time it traded above that level so there is a high probability that a significant consolidation pattern will again develop in this area.

In summary, the big picture remains the same.  There’s an orderly high-level consolidation period near S&P’s 3600, which represented the digestion period in the aftermath of the late October rally.  Market internals remains positive and downside momentum does not appear strong enough to generate widespread breakouts.  As for strategy, buying into short-term dips remains the most profitable strategy.