We’ve noted in the previous Market Outlook that: “S&P climbed above the trend channel moving average Wednesday, signify resumption of the multi-month upward trend.”  As anticipated, stocks jumped on Thursday on hopes the winner of the U.S. presidential and congressional elections would soon be determined, with shares of major tech-related companies leading the gains.  The S&P climbed 1.95 percent to 3,150.45 and the Nasdaq Composite advanced 2.6 percent to 11,890.93.  The Dow Jones Industrial Average gained 1.95 percent to 28,390.18.  The CBOE Volatility Index (VIX), widely considered the best gauge of fear in the market, fell nearly 7 percent to 27.58.

Technology stocks led the market higher Thursday. Qualcomm (QCOM) and Qorvo (QRVO) were higher after reporting stellar results as 5G demand is set to grow.  As such, the iShares PHLX Semiconductor ETF (SOXX) jumped 4.49 percent on the day and is up nearly 35 percent YTD, outperformed the S&P.  Now the question is what’s next?  Below is an update look at a trade in SOXX.

Our “U.S. Market Trading Map” painted SOXX bars in green (buy) – see area ‘A’ in the chart.  Over the past few weeks, SOXX has been trending lower in a short-term corrective mode after the late September rally ran out of steam near the prior high set in early September.  The correction tested and respected support at the 2020 rising trend line.

This week’s rally pushed the ETF above the closely watch 330 zone, signify a bullish breakout and upside reversal.  This is a positive development, opened up for a test of the more important resistance near the 420 zone, or the 161.8% Fibonacci extension.  A close above 330 on a weekly basis will confirm this.

SOXX has support around 300.  Short-term traders could use that level as the logical level to measure risk against. 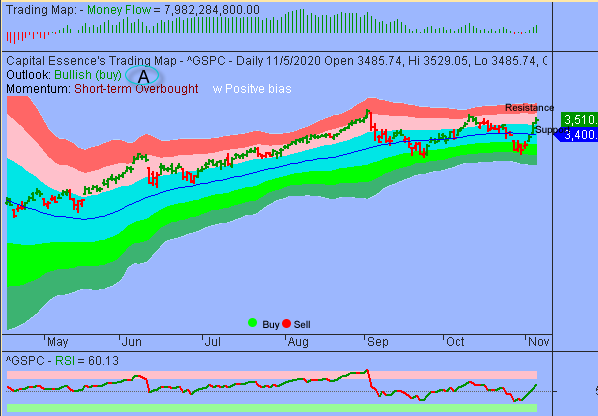 Thursday’s upside follow-through confirmed Wednesday’s bullish signal.  Key technical development in Thursday session was a clear break above the lower boundary of the pink band.  That level was significant when the S&P tested and failed in late October.  The bullish breakout would be confirmed on another close above 3500 this week, which would support upside follow-through and a retest of the early September high, just below 3600.  That level roughly corresponds with the lower boundary of the red band.  Technically speaking, the normal behavior for the S&P has been to consolidate and retreated almost every time it traded above that level so there is a high probability that a significant consolidation pattern will again develop in this area.  Additionally, short-term overbought conditions has returned on an intraday basis so it should not be surprising to see some backings and fillings in the coming days.

In summary, S&P cleared key resistance, breaking out above formidable resistance.  Consecutive close above 3500 this week would confirm Thursday’s bullish breakout signal, supporting upside follow-through in the days ahead.  However, market is short-term overbought following recent advance. There could be a sell-off in the offing but it would be shallow if so.