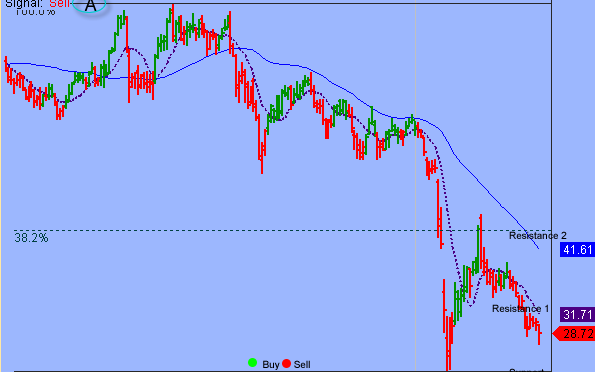 Stocks cut losses into the close Friday, but posted its worst week since March as technology slipped on weaker quarterly earnings, while rising Covid-19 infections prompted investors to abandon their bullish bets on stocks.  For the day, the Dow Jones Industrial Average gave up 0.6 percent to 26,501.60. The S&P dropped 1.2 percent to 3,269.96 and the Nasdaq Composite pulled back 2.5 percent to 10,911.59.  The CBOE Volatility Index (VIX), widely considered the best gauge of fear in the market, rose more than 1 percent to 38.02.

Energy cut its losses to end positive as oil major Exxon Mobil (XOM) pared some intraday weakness following disappointing quarterly results. As such, the Energy Select Sector SPDR Fund (XLE) rose 0.56 percent on the day but is down more than 52 percent YTD, underperformed the S&P.  Now the question is what’s next?  Below is an update look at a trade in XLE. 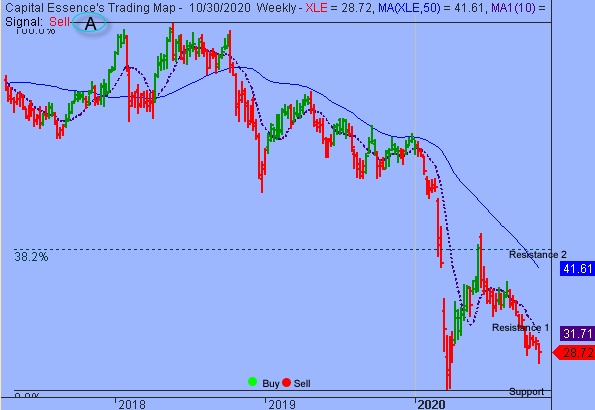 Our “U.S. Market Trading Map” painted XLE bars in red (sell) – see area ‘A’ in the chart.  XLE has been trending steadily lower over past months after the late March recovery rally ran out of steam near the 38.2% Fibonacci retracement.  Last week’s selloff tested support at the 27 zone, or the early April breakout point.  Friday’s bullish trading action suggested that the support would hold, at least for the time being.

XLE has 31.70 to trade against.  A sustain advance above that level is required to neglect the short-term downward pressure.

XLE has support around 27.  A failure to hold above that level will bring the March, just below 23, into view.  Short-term traders could use that level as the logical level to measure risk against. 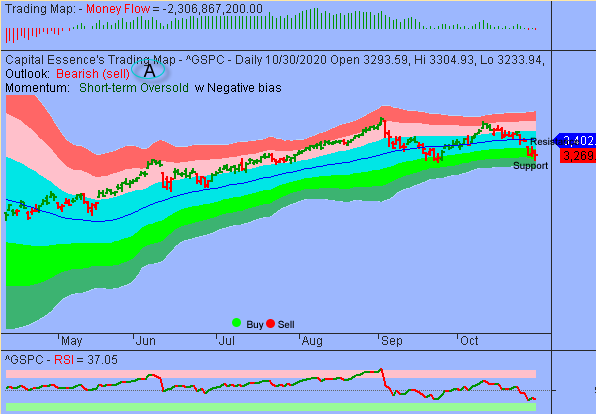 Once again, S&P moved down to test support at the 3200 zone after Thursday’s rally attempt ran out of steam near the upper boundary of the green band.  That level roughly corresponds with the September low.  Money Flow measure fell below the zero line, indicating a negative net demand for stocks.  Momentum shifted lower but the indicator is much closer to oversold following recent decline.  This could help putting a short-term floor under the market.

Right now, the most important thing to watch is trading behavior as the 3330 zone is tested as resistance.  A sustain advance above that level will bring the 3400 zone into view. There is no reason to turn particularly bullish until this zone is eclipsed.

With that said, if the market is going to find bottom in the near term, we want to see the S&P establishes some trading ranges and climbs above 3400.  Staying below that level heralds more losses.

In summary, S&P is short-term oversold following recent decline.  Like a rubber band, stocks tend to snap back to the mean if they have dropped too far from the “fair” value. With that said, if lower stock prices create some values for investors, then, given everything being equal, the market should be able to find some buyers.  However, give the significant damage that had been done over the past days, upside reward could be limited.