We’ve noted in the previous Market Outlook that: “S&P is trapped within narrow trading range as traders await progress on stimulus.  Technical pressures are building up as the market dances its way into an increasingly tight trading range. S&P’s 3400 marks the inflection point.  A failure to hold above key level indicates a change in sentiment and a much deeper pullback should be expected.”  As expected, stocks closed mix Friday as investors weighed the potential for additional fiscal stimulus.  For the day, the S&P gained 0.3 percent to 3,465.39 and the Nasdaq Composite added 0.4 percent to 11,548.28.  The Dow Jones Industrial Average slid 0.1 percent to 28,335.57.  The CBOE Volatility Index (VIX), widely considered the best gauge of fear in the market, fell about 2 percent to 27.55.

Semis fell sharply Friday led by Intel (INTC), slumped more than 10 percent intraday, after the chipmaker’s better-than-expected third-quarter earnings and revenue were overshadowed by weaker margins amid a wobble in its data center business.  As such, the iShares PHLX Semiconductor ETF (SOXX) fell 0.35 percent on the day but is up more than 27 percent YTD, outperformed the S&P.  Now the question is what’s next?  Below is an update look at a trade in SOXX.

Our “U.S. Market Trading Map” painted SOXX bars in green (buy) – see area ‘A’ in the chart.  SOXX has been on a tear in recent weeks after the early September correction found support near the 2020 rising trend line.  The late September rally pushed the ETF up against the 127.2% Fibonacci extension, a key technical level based on Fibonacci levels.  Last week’s selloff suggested that the resistance would hold, at least for the time being.  The overall technical outlook however, remains supportive so we’d look to buy into short-term dips.  SOXX has 340 to trade against.  A sustain advance above that level will trigger acceleration toward the 161.8% Fibonacci extension, around 420.

SOXX has support just above 300.  Short-term traders could use that level as the logical level to measure risk against. 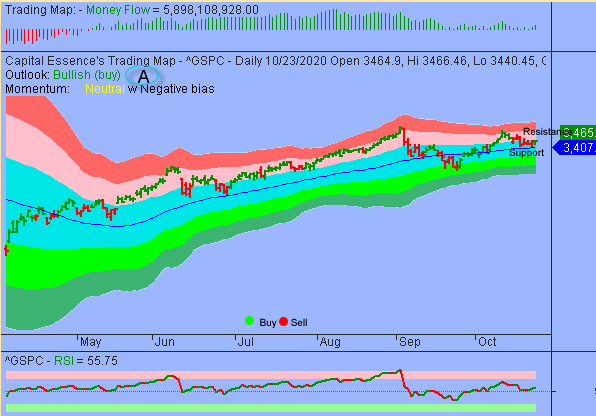 Once again, the S&P bounced off support at the trend channel moving average.  We wouldn’t look too much into Friday’s rally as the index remains confined to a sideways trading pattern, which represented the digestion period in the aftermath of the September rally.  Money Flow measure is above the zero line, indicating a positive net demand for stocks. Momentum indicator trended higher from near overbought zone, suggesting that the bulls are holding an edge for a short-term corrective mode, which is taking place within a context of a medium-term uptrend. With that said, if the index could hold above 3400 this week then a move above 3500 would be easier to achieve.  As mentioned, a close above it is required to neglect the short-term sideways trading pattern.  With that said, there is no reason to turn particularly bullish until this area is eclipsed.

In summary, S&P retested and respected support at the trend channel moving average.  Nevertheless, Friday’s rally attempt did not improve the posture of our short-term indicators, which remain supportive of further backings and fillings.  S&P has 3500 to trade against.  If that were to break, we could see 3600 next.