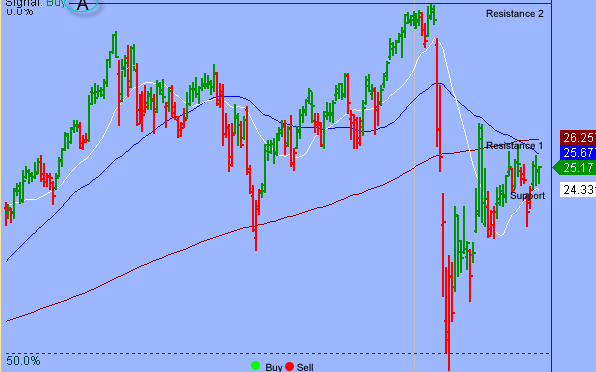 We’ve noted in the previous Market Outlook that: “near-term picture remains the same, S&P consolidates near the trend channel moving average as we’re heading into the U.S. election. Several short-term indicators are pointing toward further weakness, suggesting that S&P’s 3400 might not hold for long.  A failure to hold above that level indicates a change in sentiment and a much deeper pullback should be expected.”  As expected, stocks traded lower in early Thursday session as traders weighed House Speaker Nancy Pelosi’s latest remarks on the U.S. fiscal stimulus negotiations.  The market however, managed to overcome the early weakness and closed higher.  For the day, the S&P gained 0.5 percent to 3,453.49 and the Nasdaq Composite climbed 0.2 percent to 11,506.01.  The Dow Jones Industrial Average added 0.5 percent to 28,363.66.  The CBOE Volatility Index (VIX), widely considered the best gauge of fear in the market, fell about 2 percent to 28.11.

Financials were pushed higher by a sharp uptick in banking stocks as the favorable backdrop of rising Treasury yields continued.  Wells Fargo (WFC) added 2 percent, while Bank of America (BAC) and JPMorgan Chase (JPM) climbed more than 3 percent.  As such, the Financial Select Sector SPDR ETF (XLF) rose about 2 percent on the day but is down more than 18 percent YTD, underperformed the S&P.  Now the question is what’s next?  Below is an update look at a trade in XLF. 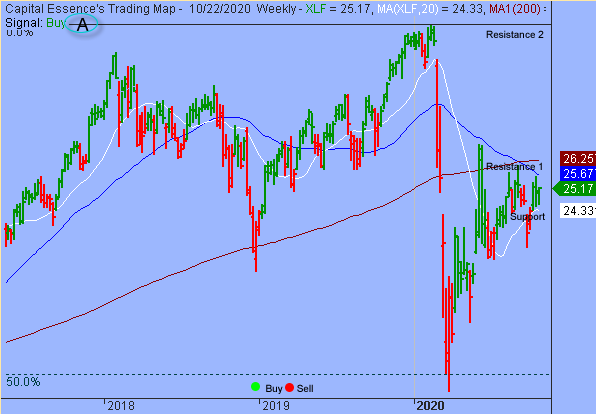 Our “U.S. Market Trading Map” painted XLF bars in green (buy) – see area ‘A’ in the chart.  Over the past few weeks, XLF has been basing sideways using the 2020 rising trend line as support after the late September rally ran out of steam near the 1-year moving average. That level was tested several times over the past months.  Technically speaking, the more often support is tested the weaker it becomes.  In fact, trading actions over the past weeks merely represented an orderly high-level consolidation.  The overall technical backdrop remains positive, suggesting that the path with least resistance remains high.  XLF has a 25.60-26.30 to trade against.  A close above that level on a weekly closing basis signify a bullish breakout and increase the probability for a rapid advance toward the early 2020 high.

XLF has support just above 24.  Short-term traders could use that level as the logical level to measure risk against.

Not much has been changed since last update.  S&P continues basing sideways using the trend channel moving average as support after the late September rally ran out of steam near the lower boundary of the red band.  Money Flow measure is flattening near zero line, indicating a lack of commitment among the bulls. Momentum indicator whipsaws below overbought zone, suggesting further backings and fillings likely.  For now, the trend channel moving average, around 3400, is the line in the sand.  We’d turn particular bearish if the index closes twice below that level.

For now, the 3475-3500 zone acted as strong resistance.  A close above it is required to neglect the short-term sideways trading pattern.  With that said, there is no reason to turn particularly bullish until this area is eclipsed.

In summary, S&P is trapped within narrow trading range as traders await progress on stimulus.  Technical pressures are building up as the market dances its way into an increasingly tight trading range. S&P’s 3400 marks the inflection point.  A failure to hold above key level indicates a change in sentiment and a much deeper pullback should be expected.