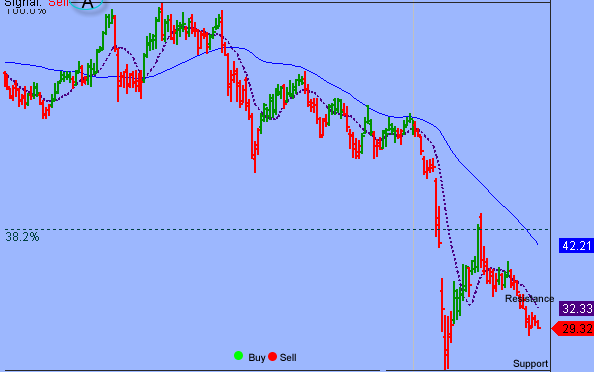 We’ve noted in the previous Market Outlook that: “trading behavior in the S&P constrained by a short-term sideways pattern and shown little evidence of a sustainable change in trend.”  As expected, stocks struggled for direction Wednesday as House Speaker Nancy Pelosi said she was optimistic over a stimulus package, though flagged Senate GOP leader Mitch McConnell as a likely stumbling block to getting a deal over the line before the U.S. election.  The S&P dipped 0.2 percent to 3,435.56.  The Dow Jones Industrial Average slipped 0.4 percent to 28,210.82.  The Nasdaq Composite slid 0.3 percent to 11,484.69.  The CBOE Volatility Index (VIX), widely considered the best gauge of fear in the market, fell more than 2 percent to 28.55.

Energy was among the biggest losers intraday, paced by a fall in oil prices as data showing a draw in U.S. weekly inventories was overshadowed by ongoing fears about demand weakness amid rising Covid-19 infections.  As such, the Energy Select Sector SPDR Fund (XLE) fell 1.91 percent on the day and is down more than 51 percent YTD, underperformed the S&P.  Now the question is what’s next?  Below is an update look at a trade in XLE. 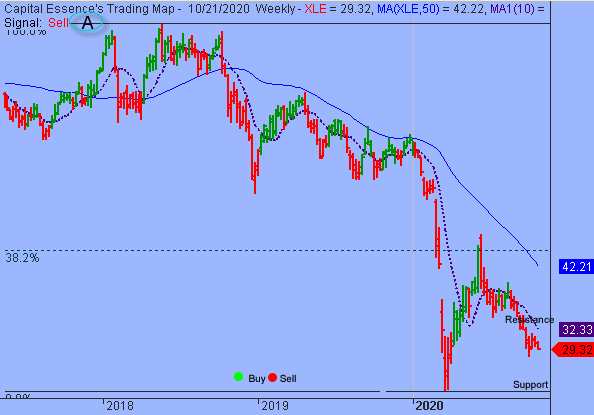 Our “U.S. Market Trading Map” painted XLE bars in red (sell) – see area ‘A’ in the chart.  XLE has been trending steadily lower over the past months after the late March recovery rally ran out of steam near the 38.2% Fibonacci retracement.  The overall technical backdrop remains negative, suggesting that the path with least resistance remains lower.  With this in mind, we’d look to increase downside exposure into any short-term rally toward the 32 zone in anticipated a retest of the March low, around 23.

XLE has resistance just above 32.  Short-term traders could use that level as the logical level to measure risk against. 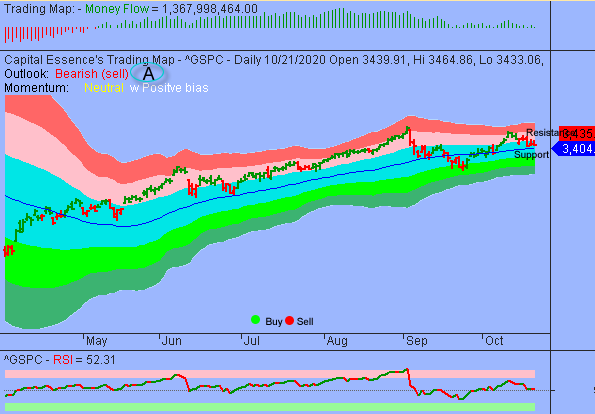 S&P continues basing sideways using the trend channel moving average as support after the late September rally ran out of steam near the lower boundary of the red band.  Money Flow measure is flattening near zero line, indicating a lack of commitment among the bulls. Momentum indicator whipsaws below overbought zone, suggesting further backings and fillings likely.  For now, the trend channel moving average, around 3400, is the line in the sand.  We’d turn particular bearish if the index closes twice below that level.

For now, the 3472-3500 zone acted as strong resistance.  A close above it is required to neglect the short-term sideways trading pattern.  With that said, there is no reason to turn particularly bullish until this area is eclipsed.

In summary, near-term picture remains the same, S&P consolidates near the trend channel moving average as we’re heading into the U.S. election. Several short-term indicators are pointing toward further weakness, suggesting that S&P’s 3400 might not hold for long.  A failure to hold above that level indicates a change in sentiment and a much deeper pullback should be expected.