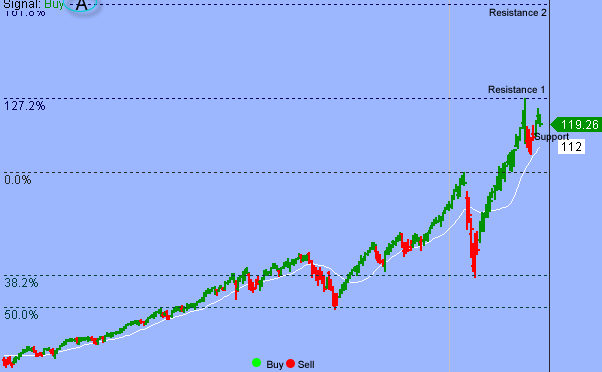 We’ve noted in the previous Market Outlook that: “the big picture remains the same. There is an orderly pullback consolidation, which represents digestion period.  However, the fact that buying pressure deteriorated as the S&P moved down to test key price level suggested that most of the potential buyers at this level had already placed their bets.  The next batch of buyers typically sits at a much lower level.  With this in mind we’d look to reduce exposure into intraday bounces.”  As expected, S&P traded as high as 3476 in early Tuesday before gave up most of all of the early gains as investors weighed up the latest progress on stimulus with just hours to go until the deadline for lawmakers to reach a deal.  For the day, the bench mark gauge added 0.5 percent to 3,443.12 and the Nasdaq Composite advanced 0.3 percent to 11,516.49.  The Dow Jones Industrial Average rose 0.4 percent to 28,308.79.  The CBOE Volatility Index (VIX), widely considered the best gauge of fear in the market, rose less than 1 percent to 29.28.

Further signs of a government crackdown on the monopoly power of large cap tech did little to sour investor sentiment on the sector.  The U.S. government filed an antitrust lawsuit against Google on allegations it had violated competition law to preserve its monopoly over internet searches and online advertising.  As such, the Technology Select Sector SPDR Fund (XLK) rose 0.34 percent on the day and is up more than 30 percent YTD, outperformed the S&P.  Now the question is what’s next?  Below is an update look at a trade in XLK. 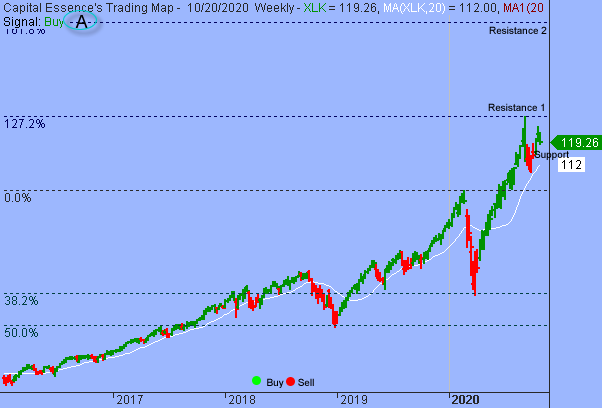 Our “U.S. Market Trading Map” painted XLK bars in green (buy) – see area ‘A’ in the chart.  Over the past few weeks, XLK has been trending higher after the early September correction found support near the 2020 rising trend line.  The rally tested resistance at the 123-128 zone, or the prior high set in early September.  This week’s bearish trading action suggested that the resistance would hold.  The overall technical backdrop remains positive, suggesting that the path with least resistance remains higher.  With this in mind, we’d look to increase upside exposure into any short-term dips toward the 112 zone.  For now, the 123-128 represents key resistance.  A close above 128 on a weekly closing basis will trigger acceleration toward the 150-160 zone, or the 161.8% Fibonacci extension.

XLK has support near 112.  Short-term traders could use that level as the logical level to measure risk against. 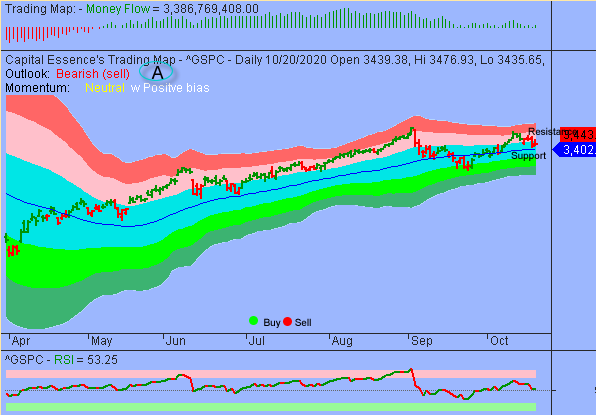 S&P continues basing sideway using the trend channel moving average as support after the early rally attempt ran out of steam near the lower boundary of the pink band.  Market internal has been deteriorated following recent decline but downside momentum does not appear strong enough to generate widespread breakdowns.  For now, the 3472-3500 zone acted as strong resistance.  A close above it is required to neglect the short-term sideways trading pattern.  With that said, there is no reason to turn particularly bullish until this area is eclipsed.

On the downside, the trend channel moving average, around 3400, is the line in the sand.  That level was tested several times over the past months.  When strong support is broken it means that near-term buying pressure has finally been exhausted.  With that said, a close below 3400 is outright bearish and a much deeper pullback should be expected and we’re looking at 3300.

In summary, trading behavior in the S&P constrained by a short-term sideways pattern and shown little evidence of a sustainable change in trend.  For now, 3500 is the line in the sand.  There is a no reason to turn particularly bullish until this area is taking out.