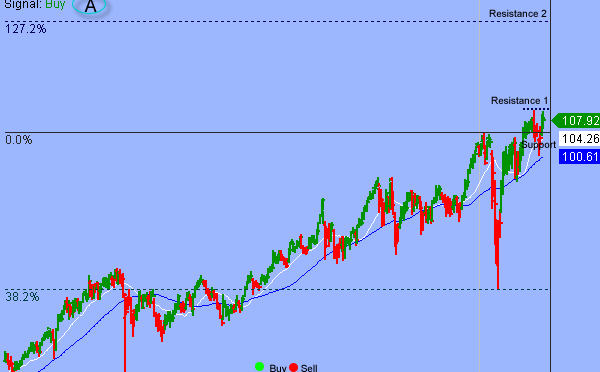 We’ve noted in the previous Market Outlook that: “the big picture remains the same. There is an orderly pullback consolidation, which represents digestion period.  However, the fact that buying pressure deteriorated as the S&P tested key price level suggested that most of the potential buyers at this level had already placed their bets.  The next batch of buyers typically sits at a much lower level.  With this in mind we’d look to reduce exposure into intraday bounces.”  As expected, S&P traded higher in early Friday session as investors cheers the stronger retail sales data before the late day selling pushed the index into the red. For the day, the bench mark gauge eked out a small gain, closing at 3,483.81.  The Dow Jones Industrial Average rose 0.4 percent to 28,606.31.  The Nasdaq Composite ended the day down 0.4 percent to 11,671.56.  The CBOE Volatility Index (VIX), widely considered the best gauge of fear in the market, rose more than 1 percent to 27.41.

Pfizer (PFE) said it would apply for emergency U.S. approval of its Covid-19 vaccine it is developing with Germany’s BioNTech in the third week of November. Pfizer and Biontech Se (BNTX) both added nearly 4 percent.  The news helped restore some optimism over a Covid-19 vaccine after both Eli Lilly and Company (LLY) and Johnson & Johnson (JNJ) announced setbacks earlier this week.  As such, the Health Care Select Sector SPDR Fund (XLV) rose 0.99 percent on the day and is up about 6 percent YTD, slightly underperformed the S&P.  Now the question is what’s next?  Below is an update look at a trade in XLV. 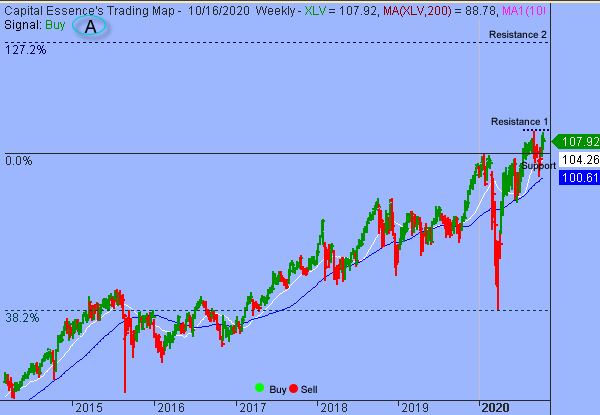 Our “U.S. Market Trading Map” painted XLV bars in green (buy) – see area ‘A’ in the chart.  Over the past few weeks, XLV has been trending higher after the early September correction found support near the one-year moving average, a key technical level based on moving averages. This week’s rally pushed the ETF up against the closely watch 110 zone, or the prior high set in September.  The overall technical backdrop remains positive, providing support for further advance. Right now, the most important thing to watch is trading behavior near the 110 zone.  A close above that level on a weekly closing basis has measured move to around 130, or the 127.2% Fibonacci extension.

XLV has support near 105.  Short-term traders could use that level as the logical level to measure risk against. 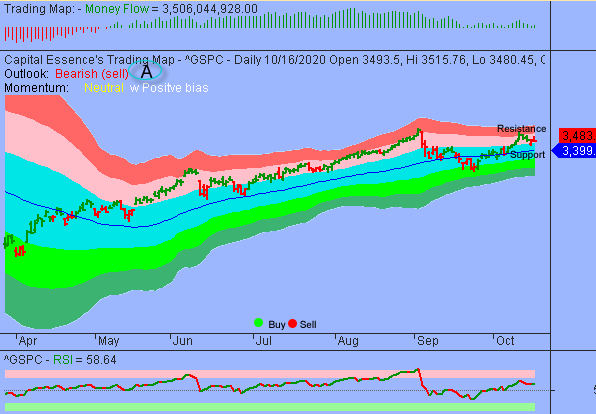 S&P sold off after the early rally attempt ran out of steam near the important sentiment 3500 mark. That level was tested several times over the past months.  Technically speaking, the longer the index holds below this resistance the stronger it becomes.  Adding to concerns is Money Flow measure, which hovers near the zero line since market broke down in early September, indicating a weak net demand for stocks.  Right now, the most important thing to watch is the retreat and rebound behavior as the 3460 zone is tested as support.  A close below that level suggested that the next leg would be lower and we’re looking at 3400.

In summary, there is currently a test of resistance at the important sentiment 3500 mark.  If the S&P fails to climb above that level this week than the next stop will be 3400 with the possibility of a brief breakdown below that level.