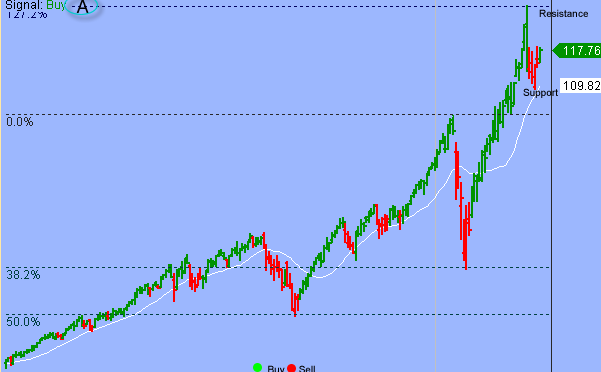 Equity market closed higher Wednesday as value stocks like consumer discretionary and industrials caught a bid on renewed hopes for stimulus after U.S. President Donald Trump said he was in favor of targeted coronavirus aid.  For the day, the Dow Jones Industrial Average rose 1.9 percent to 28,303.46. The S&P climbed 1.7 percent to 3,419.45 while the Nasdaq Composite advanced 1.9 percent to 11,364.60.  The CBOE Volatility Index (VIX), widely considered the best gauge of fear in the market, fell more than 4 percent to 28.22.

Tech attracted strong buying support despite coming under increased scrutiny after Congress released a report condemning big tech’s monopoly power and called for a break up.  Apple (AAPL), Microsoft (MSFT), Alphabet (GOOGL), Amazon.com (AMZN) and Facebook (FB), which together make up a quarter weighting of the S&P, ending higher. As such, the Technology Select Sector SPDR ETF (XLK) rose 1.83 percent on the day and is up more than 28 percent YTD, outperformed the S&P.  Now the question is what’s next?  Below is an update look at a trade in XLK. 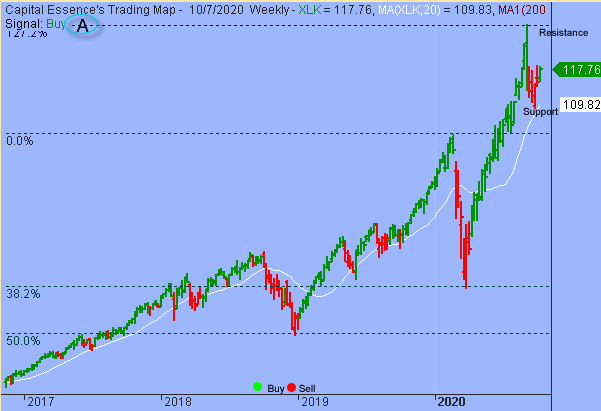 Our “U.S. Market Trading Map” painted XLK bars in green (buy) – see area ‘A’ in the chart.  Over the past few weeks, XLK has been trending higher after the early September correction found support near the spring 2020 rising trend line.  This week’s rally pushed the ETF above the September falling trend line, signify a bullish breakout and upside reversal.  This is a positive development, opened up for a retest of the September high, just below 130.  That level roughly corresponds to the 127.2% Fibonacci extension. 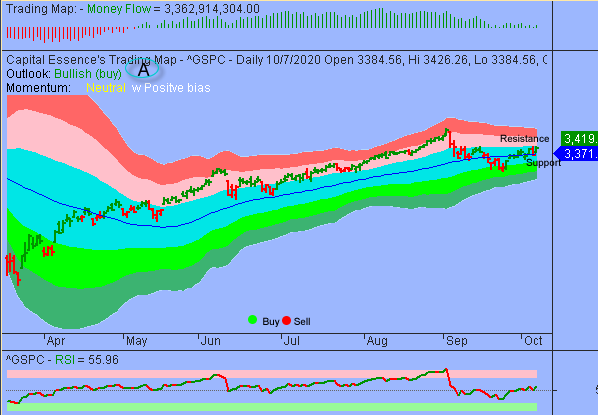 Once again, S&P rebounded nicely off support at the trend channel moving average.  Wednesday’s recovery rally tested resistance at the lower boundary of the pink band.  That level was significant when the index fell below it in early September.  It’s now acting as strong resistance.  Momentum has been strengthened but does not appear strong enough to generate widespread breakouts.  While more backing and filling would not be a surprise, a close above the lower boundary of the pink band, currently at 3430, it is required to neglect the short-term sideways trading pattern.  There is a no reason to turn particularly bullish until this area is eclipsed.

In summary, Wednesday’ recovery rally is testing ‘support turned resistance’ near S&P’s 3430.  The short-term technical backdrop remains positive but upside momentum does not appeared strong enough to generate widespread breakouts.  While more backing and filling would not be a surprise, a close above 3430 is required to neglect the short-term sideways trading pattern.